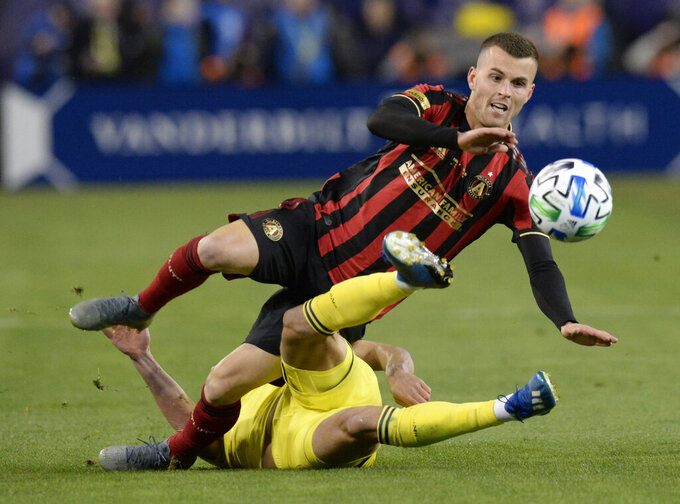 NASHVILLE, Tenn. (AP) — Nashville made a star-filled entry into Major League Soccer, making history with the biggest crowd ever to see a soccer game in the state of Tennessee.

Celebrating the new MLS home team's first victory will have to wait.

“The crowd was fantastic, Nashville midfielder Dax McCarty said. ”They were the best part of the evening. I think everyone can see that. On a national stage introducing Nashville to the world of MLS, they were top notch. Give them an A-plus. I hope they keep coming back out and supporting us because if we get support like that every week we're going to be really good, and I can promise them that."

Ezequiel Barco also scored in the ninth minute for Atlanta, the 2018 MLS Cup winners who won both the U.S. Open Cup and Campeones Cup last season.

Walker Zimmerman scored the first goal for Nashville off a set piece in the 28th minute, giving fans something to celebrate. A handful of NFL players also were on hand, including Titans Pro Bowl punter Brett Kern and teammate Cory Davis along with San Francisco tight end George Kittle.

“I’ve had a couple of new team openings in the last 20 years, and this one ranks as at least for me one of the most exciting," MLS Commissioner Don Garber said. ”I literally got chills in pregame ceremony ... The crowd over-delivered as well."

Nashville acquired Zimmerman from Los Angeles FC on Feb. 11, adding the veteran with five goals in 51 MLS games to a roster featuring 14 making their league debut this season. Zimmerman headed the ball, then scored with his right foot kicking the ball past keeper Brad Guzan.

That only lasted until Hyndman scored into the right corner for the lead.

The win was costly for Atlanta. Josef Martinez, the 2018 MLS Golden Boot winner who had 27 goals last year, was taken off the field on a stretcher in the 68th minute after going down for the second time in a few minutes with an apparent right knee injury. Martinez was seen wearing an aircast on a cart as he left after the game.

Coach Frank de Boer said Martinez would be examined in a day or two back in Atlanta and didn't want to speculate on the injury.

Atlanta defender Franco Escobar also was hurt and was replaced at the start of the second half. De Boer said that was more a muscular issue.

Nashville had chances at a tie. Randall Leal hit the left post in the 78th minute, and the team also had a free kick on the edge of the box in the 80th. Abu Danladi had a shot from outside the box smothered by Guzan in the 90th before a frantic four minutes of stoppage time.

Coach Gary Smith said he thought Nashville should have gotten a point out of the game, which he called disappointing.

“As far as the occasion goes, I don't think we could've asked much more of the fans that turned up, supported us,” Smith said. “The atmosphere that was created, the opportunity for the players to perform in front of such a great environment and crowds, I felt as though they rose to.”

This capped a long process where Nashville went from being an after-thought for a possible expansion franchise to being awarded an expansion club on Dec. 20, 2017, as the league's 24th team. Nashville has had some delays getting construction started on its 30,000-seat stadium and finally got Music City's third mayor since 2017 to sign off on a revised deal now costing $335 million.

Issues over the future stadium did not slow down Nashville's preparations for this debut.

Nashville hired former Liverpool chief executive Ian Ayre as its first CEO to build the franchise from the ground up in May 2018, and he hired Smith in March 2019 as the coach for this inaugural season hoping to tap his experience guiding the Colorado Rapids to the 2010 MLS Cup title. Smith led Nashville to a 20-7-7 record last season in the USL Championship.

With its MLS debut finally at hand, Nashville threw a very big party with 59,069 on hand at Nissan Stadium, home to the NFL's Tennessee Titans and to this team until its 30,000-seat stadium opens. That topped the 50,232 in this stadium in 2017 when Tottenham and Manchester City played.

This being Music City, alternative band Judah & the Lion performed the expansion team's new anthem “Never Give Up On You" before the start. Lzzy Hale of the group Halestorm played a Gibson guitar decked out in Nashville's blue and gold team colors, and Charles Esten, who starred on the TV show “Nashville” sang the national anthem.

Johnny Cash even made an appearance on a big flag with the Nashville logo covering up a famous picture of the late singer making a gesture with his middle finger.