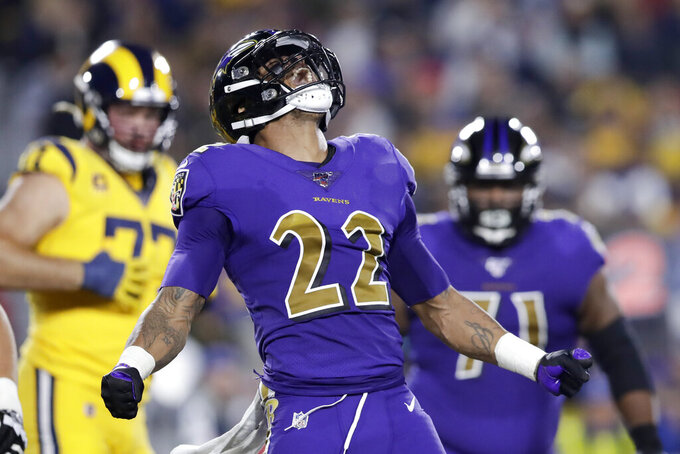 BALTIMORE (AP) — Perhaps the most impressive aspect of the Baltimore Ravens’ seven-game winning streak and the stellar play of Lamar Jackson is how easily the team and its quarterback have steamrolled several of the best teams in the NFL.

The defending NFC champion Los Angeles Rams, playing at home on Monday night, were victimized by Jackson and a swarming defense in a 45-6 blowout. Jackson threw five touchdown passes, ran for 95 yards and seemingly moved closer to putting an MVP trophy next to the Heisman he received in 2016 with Louisville.

“He’s an MVP for a reason, with what he’s doing and the whole team,” said Rams safety Eric Weddle, who played the previous three seasons with Baltimore.

Jackson is more interested in a different piece of hardware — the one that comes with winning the NFL championship.

“I'm not worried about MVP. If it comes, it comes,” he said. “I'll be satisfied; but I'm trying to win a Super Bowl. That's a team award; that's what I want."

Baltimore (9-2) still trails the Patriots by a game in the race for top seed in the AFC. But if the Ravens must play at New England in the postseason, it’s hard to imagine they’ll be overwhelmed by the assignment.

After all, the Ravens beat Seattle 30-16 on the road before handing the Patriots their only defeat thus far, a 37-20 drubbing in Baltimore. Then came a 49-13 win over the Bengals, a 41-7 beatdown of Houston and the rout of the Rams.

Add it up: Over a five-game stretch that included four teams that made the playoffs last season, the Ravens outscored their opponents by a collective 202-62.

Let’s start with Jackson, now 15-3 as a starter since taking over last November. He runs, he throws and rarely makes a mistake.

The gritty 22-year-old is the main reason why Baltimore ran for 285 yards (including 111 by Mark Ingram) against the Rams and owns the best rushing attack in the league.

“You don’t know what to defend. He can do so much,” Ravens rookie receiver Marquise Brown said after catching two touchdown passes. “We got so many weapons. It’s hard to defend.”

It’s tough to find flaws in the way the Ravens are playing during this hot streak. It might be a stretch, but they only had two sacks Monday night after nailing Houston’s Deshaun Watson seven times in their previous game.

Willie Snead caught two touchdown passes, doubling his total over the first 10 games. Jackson said he wanted to get his wide receivers more involved, and he did so by getting Snead and Brown two TDs apiece.

Defensive back Chuck Clark got a 15-yard penalty for swatting a ball headed toward a referee after the play was over. He also missed picking up a fumble by trying to scoop up the football and run with it instead of pouncing on it. The Rams recovered.

Center Matt Skura was placed on injured reserve Tuesday. He was carted off the field with a knee injury in the first quarter Monday night and replaced by rookie Patrick Mekari. Also, defensive tackle Michael Pierce missed a second straight game with an ankle injury.

The Ravens’ winning streak — tied for the longest in franchise history — could be tested by the San Francisco 49ers (10-1), who are tied for the best record in the NFL and headed to Baltimore on Sunday afternoon.