Jets' Herndon focused on bouncing back from lost season 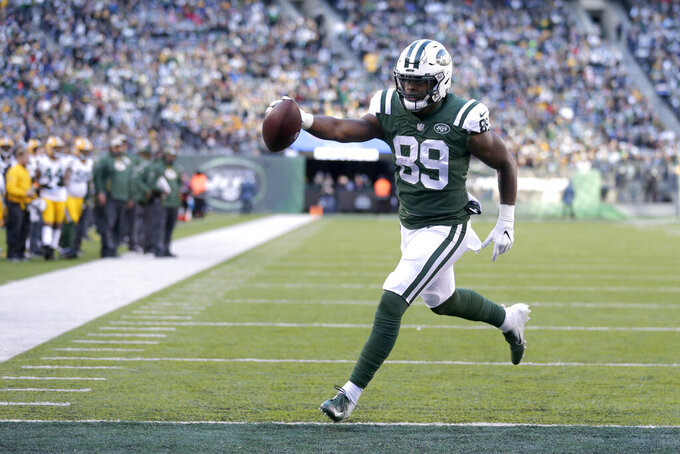 FILE - In this Dec. 23, 2018, file photo, New York Jets tight end Chris Herndon scores on a touchdown pass from quarterback Sam Darnold during the second half of an NFL football game against the Green Bay Packers in East Rutherford, N.J. Herndon was all set for a big breakout season a year ago with the Jets. A four-game suspension and a few tough injuries put those plans on hold. Now, the third-year tight end is ready to make up for lost time. (AP Photo/Seth Wenig, File)

NEW YORK (AP) — Chris Herndon was all set for a big breakout season a year ago with the New York Jets.

A four-game suspension and a few tough injuries put those plans on hold. Now, the third-year tight end is ready to make up for lost time.

“My body’s feeling good,” the 24-year-old Herndon said during a video conference call. “I’m in a good space mentally. I’m excited to be back with my team and putting in work with them again.”

As a rookie in 2018, Herndon flashed glimpses of tantalizing playmaking ability. The tight end, drafted in the fourth round out of Miami, finished with 39 catches for 502 yards and four touchdowns — including scores in three straight games — while establishing a solid connection with quarterback Sam Darnold.

But, last season began with a suspension for violating the NFL's substance abuse policy after he pleaded guilty in January 2019 to driving while intoxicated in New Jersey in June 2018. Shortly before Herndon was reinstated, he injured a hamstring and needed to sit out four more games.

He finally made his season debut in Week 10 against the Giants and had a 7-yard catch — a play on which he also broke a rib. And just like that, after a mere 18 snaps, his season was over.

“It was tough,” Herndon said. “It didn’t go exactly as planned, especially coming off suspension. It was a big learning year for me and kind of a chance to step back and watch from the outside and also made me appreciate it more because that was just a quick view of how fast it can be taken from you.

“It wasn't the best year, but I definitely learned a lot from it and grew as well.”

Herndon recalled how much work he put in during his suspension, watching from afar as the Jets played their first four games, and again being forced to be a spectator while trying to rehabilitate his injured hamstring.

"I felt like I was doing the right things to come back from suspension,” Herndon said. “I had a little fluke accident and the first game back I get injured. It was definitely tough at first. The first couple of weeks I was kind of accepting that the season for me was done and I couldn’t be out there with my team.”

Ryan Griffin emerged as a reliable target for Darnold during Herndon's absence, and the Jets signed the veteran tight end to an extension. New York also has Dan Brown, Trevon Wesco and Ross Travis at the position, but the return of Herndon has the Jets excited — again.

"It's going to be nice to see Chris Herndon be able to get out and practice and getting him rolling right from the beginning," coach Adam Gase said shortly before the start of training camp.

Herndon's ability to catch the ball in the the middle of the field or down the sidelines should make him a frequent presence in Gase's gameplans. He can also block a bit, and there's the possibility Herndon and Griffin could combine on two-tight end sets that make it tough on opposing defenses.

“Right now, I don’t want to look too far ahead,” Herndon said of his personal expectations. “I want to take things day by day, get into camp, start getting reps on the field and kind of go from there. I don’t want to put too much in the air right now.”

Herndon has spent his first few weeks back at the facility getting reacquainted with the offense — and reestablishing his rapport with the quarterback.

“That just comes with continuing to get reps and continuing to stay in the playbook and doing what I have to do, doing what my teammates and coaches are asking of me,” Herndon said. “That’ll put you in the right position to make plays and be on the field and help the team out as much as possible.”

And, just as a reminder of how that connection can look on the field, the Jets posted a video on Twitter of Darnold throwing a deep pass to Herndon during a walkthrough earlier this week, with the caption: “Darnold + Herndon back together.”

The Jets and their fans hope that's the case for a long time to come.