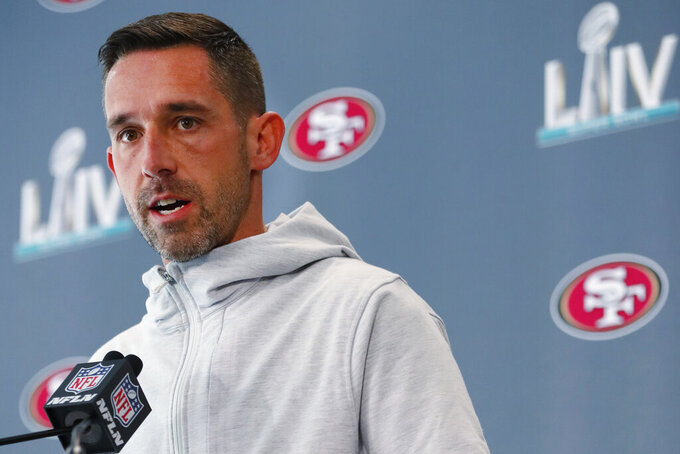 DENVER (AP) — Mike Shanahan has never been this nervous about a Super Bowl. It's one thing to coach in the big game, quite another to watch your kid do it.

Shanahan, who coached in four Super Bowls as an assistant before leading the Denver Broncos to back-to-back titles in the late 1990s with John Elway at quarterback, will watch his son Kyle coach the San Francisco 49ers against the Kansas City Chiefs in Super Bowl 54 on Sunday.

"You're much more relaxed as a coach," Shanahan told The Associated Press in an interview in Denver before flying to Miami. "You're going to have to stay on point throughout the game, thinking a play or two ahead now, but you've prepared for all scenarios as a coach.

“But as a father watching from the stands, you have no idea what's going to happen. Well, you have a little idea, but you don't know for sure. So, it's a lot more nerve-wracking being a dad than it is being a coach."

Shanahan said he doesn't really have any pearls of wisdom to impart to Kyle before kickoff at Hard Rock Stadium.

Kyle was Atlanta's hot-shot offensive coordinator three years ago in Super Bowl 51 in Houston when the Falcons blew a 28-3 lead and lost in overtime to Tom Brady and the New England Patriots just before he landed his current gig.

As a kid, Kyle was at his father's side a quarter century ago, serving as a ball boy in Super Bowl 29 when Mike Shanahan was calling offensive plays for Steve Young in the 49ers' 49-26 shellacking of the San Diego Chargers at Joe Robbie Stadium in Miami.

"To think about him 25 years later being the head coach of the 49ers in the Super Bowl, in Miami, it's amazing," Shanahan said. "I'm obviously very proud of what he's done and what he's accomplished. He's got one more big game left."

Shanahan was Denver's offensive coordinator in a pair of Super Bowl losses before leading the Broncos to the first of back-to-back titles as their head coach with a 31-24 upset of the Green Bay Packers in Super Bowl 32 in San Diego.

A high school senior at the time, Kyle was at his father's side that night, holding the cords for the head coach's headphones in the days before they went wireless.

So, there's really not any fatherly advice the elder Shanahan could give his son now; Kyle's already implemented the lessons he learned from previous Super Bowls. even if this is his first one as a head coach, suggested his father.

Like putting in the game plan before flying out for Super Bowl week and minimizing the distractions closer to game day.

"You don't realize if you haven't been there, which the majority of players haven't, about all the distractions, family, media, all the great things at a Super Bowl," Shanahan said. "When you've been through it you realize all the potential problems you can have and you let them take care of those so the players can concentrate on their jobs."

Shanahan went 178-144 in two decades as an NFL head coach with the Broncos, Raiders and Redskins.

Kyle is 25-25 as San Francisco's head coach, and a win in the Super Bowl would put him above .500 for the first time.

Pretty impressive when you consider he started out his head coaching career with nine losses and slipped to 4-12 a year ago when QB Jimmy Garoppolo suffered a season-ending knee injury in September.

This year, they're 15-3, going from the second overall pick in the draft last April to the Super Bowl.

"I think Kyle knew the situation at hand when he took the job, he knew there was going to be some growing pains, but he'd have a chance to build the team the right way," Shanahan said. "I'm proud of how far they've come."

Shanahan attended plenty of his son's practices last summer and said he saw the seedlings of a turnaround season with Garoppolo and Richard Sherman bouncing back from injury-marred 2018 seasons.

"To be honest, what really impressed me this year, though, was they sustained a number of injuries on offense and defense and guys stepped up in backup situations, came in and played extremely well," Shanahan said. “That speaks to your depth and character when you lose some of those key parts and are still able to win and overcome adversity.”

That has galvanized the 49ers much like overcoming an injury epidemic sparked Green Bay to the title after the 2010 season.

"Everybody feels good about it when you're able to overcome injuries like that," Shanahan said.

Shanahan had the honor of handing the George Halas Trophy to his son after the 49ers beat the Packers 37-20 in the NFC championship.

Watching his son raise the Lombardi Trophy on Sunday night would rank right up there with Jan. 25, 1998, when the Broncos beat Green Bay for their first Super Bowl triumph in five trips, Shanahan said.

It might even bring a bigger smile to the father's face.

"One of the biggest things you want in life is seeing your kids succeed at whatever it is they do," Shanahan said. "To see him on this journey that he's had, it just makes me real proud of what he's been able to do in his profession. It's not easy. You've got to believe in yourself and work through tough times because if you don't, you won't last."