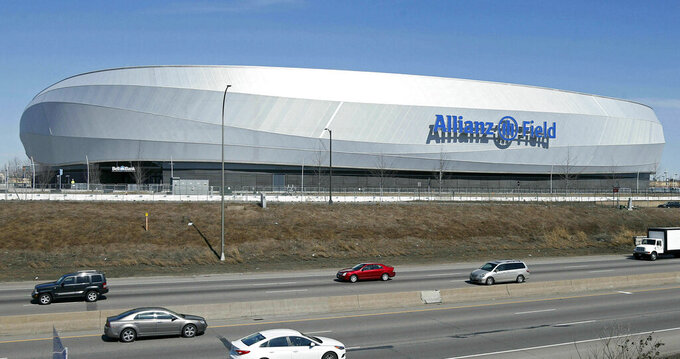 In this March 26, 2019, photo, the new stadium of the Minnesota United FC Loons is shown in St. Paul, Minn. The MLS soccer team's home opener and debut of the privately-funded Allianz Field is April 13 against New York City FC in St. Paul, Minn. (AP Photo/Jim Mone) 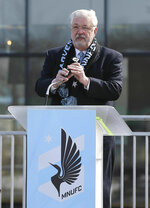 ST. PAUL, Minn. (AP) — There's no clearer way to show the growth of Major League Soccer than with a shiny new stadium, built simply for the sport long dubbed "the beautiful game."

The latest soccer-specific venue to join the league has opened in Minnesota, where Allianz Field's striking and futuristic appearance has produced the aesthetics to match that lofty label once coined for the artistry of the action on the pitch.

"The club has done an incredible job of catering it to everything we need. I know the supporters are going to be impressed with everything that they've got," said Minnesota United coach Adrian Heath, who once played for Everton in the English Premier League. "I can say from the professional's point of view, and I've been doing this since I left school at 15: We've got everything that we need. This is as good as anywhere in the world."

When MLS began play in 1996, most of the teams were offseason tenants in cavernous NFL stadiums. Under the direction of Commissioner Don Garber, a former NFL marketing executive, MLS clubs have steered toward smaller venues of their own to capture more of the chant-and-song-driven energy of crowds in other countries.

Now with Minnesota United's move into this European-style, curved-canopy structure, 18 of the current 24 franchises will play in soccer-specific buildings, and more are in the queue following the league's aggressive expansion plan.

Atlanta, New England and Seattle play in NFL stadiums, and Atlanta (in two years) and Seattle (over 10 years) have the two biggest draws. NYCFC calls an MLB ballpark, Yankee Stadium, home. Newcomer FC Cincinnati shares a space with the city's college football team for now, with a venue of its own under construction. Vancouver shares BC Place with the local Canadian Football League team. So does Toronto, but BMO Field was first built for soccer. In an unusual twist, the Los Angeles Galaxy's stadium in Carson, a suburb south of downtown, has been hosting the NFL's Chargers while their new home is being built.

"The league really needed to go from providing the promise of what soccer in the U.S. and Canada can be to actually delivering on that from a technical perspective," Garber said last month at Allianz Field, at a "scarf-raising" ceremony rather than a ribbon cutting. "Now when you're speaking to high-level international players, they can look at Major League Soccer as not just a place to further their career but actually to develop their career and provide more value."

The public appetite for funding sports facilities in Minnesota was beyond exhausted, after a bruising, decade-plus push by the NFL's Vikings yielded the $1.1 billion U.S. Bank Stadium in downtown Minneapolis. So Minnesota United owner Bill McGuire, a former health care executive who bought the team to save the financially strapped club from folding while it was in the lower-tier North American Soccer League, and his partners committed to fully private financing the stadium that was a prerequisite for acceptance by MLS.

After Minneapolis balked at a property tax exemption for a proposed site near where the Twins play baseball at Target Field, the other twin city, St. Paul, offered one on an abandoned bus barn site next to Interstate Hwy. 94 in a diverse, redeveloping and transit-friendly neighborhood halfway between the two downtowns.

What emerged was a stunning, spaceship-like building designed by the prominent sports architecture firm Populous, featuring a translucent skin embedded with multi-colored LED lights that make for a variety of decoration options for an otherwise dreary stretch of pothole-pocked freeway. Inside, the seats are right on top of the action, as close as 17 feet and no further than 125 feet, bound to create a lively atmosphere for a team that finished fifth in the MLS last season in average attendance (23,902 per game).

Most importantly for the Loons, as they're affectionately called by the fans, they'll get to run around on natural grass instead of artificial surface.

"I know my knees are thankful. We've got some older guys who are really going to be thankful for it," defender Brent Kallman said. "The game is just different on turf, right? It just changes the game completely. It's not proper soccer, I would say, and we're going to have a lovely pitch."