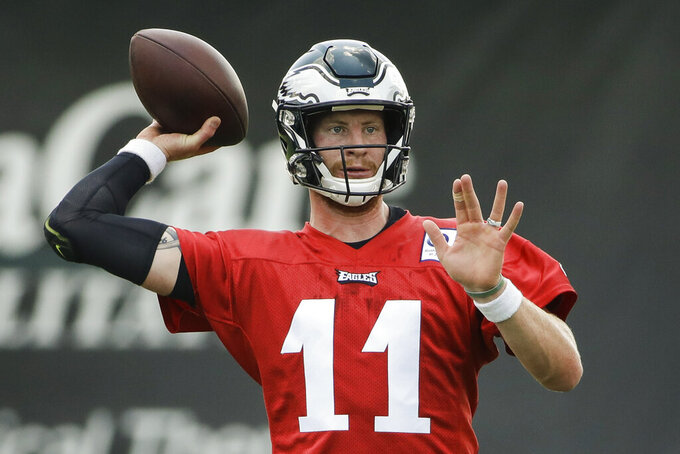 FILE - In this July 25, 2019, file photo, Philadelphia Eagles quarterback Carson Wentz throws a pass during practice at the NFL football team's training camp in Philadelphia. Wentz, Jason Peters and Darren Sproles have unfinished business. The franchise quarterback, the nine-time Pro Bowl left tackle and the versatile veteran were injured when the Eagles won the first Super Bowl in franchise history following the 2017 season. They are determined to deliver another parade down Broad Street. (AP Photo/Matt Rourke, File)

The franchise quarterback, the nine-time Pro Bowl left tackle and the versatile veteran were injured when the Philadelphia Eagles won the first Super Bowl in franchise history following the 2017 season. They're determined to deliver another parade down Broad Street.

"Everybody that missed the Super Bowl, we still have something to prove," Peters said.

Wentz was back on the sideline last season during the team's playoff run that ended 27 yards short of a return trip to the NFC championship game. He signed a four-year, $128 million contract extension in the offseason and wants to hoist that Vince Lombardi Trophy after playing in the game.

"It stung not being on the field," Wentz said about Nick Foles leading the Eagles to a 41-33 victory over New England in February 2018. "It gives the guys who weren't out there a little extra motivation."

Peters started every game last season but was nagged by injuries and didn't finish every one. The massive 37-year-old blocker is back for his 16th season hoping to be on the field to help the team win it all.

Sproles, sixth on the NFL's all-time all-purpose yards list, put off retirement to return at age 36 for a chance to be part of another championship. The speedy running back/returner still hasn't lost a step.

"I want that Super Bowl," he said.

The Eagles and their fans have super aspirations. The roster is stacked but coach Doug Pederson knows championships aren't won on paper.

"Talent can get you so far, but how well we jell as a football team, that's my concern, and my goal is let's not worry about (expectations)," Pederson said. "We have to execute on the field. Nothing's ever handed to us in this business. We have to go take it. We have to go earn it."

Some things to know about the Eagles:

Wentz has plenty of guys to target. Three-time Pro Bowl wide receiver DeSean Jackson is back in Philadelphia, giving the offense a deep threat to stretch the field for Alshon Jeffery, Nelson Agholor and tight ends Zach Ertz and Dallas Goedert. Rookie wideout J.J. Arcega-Whiteside is another weapon, especially inside the red zone. Ertz, who set an NFL record for the position with 116 catches last season, and Goedert will be paired together in some formations, creating mismatches for defenses.

Jordan Howard and rookie Miles Sanders headline a deep group of running backs that include Sproles and Corey Clement, one of several 2018 Super Bowl heroes. Sanders has been the most impressive runner in camp. Howard ran for 3,370 yards and 24 TDs in three seasons in Chicago. Second-year pro Josh Adams and Wendell Smallwood, the top two rushers last season, are on the roster bubble along with Boston Scott.

Peters and right tackle Lane Johnson, an All-Pro in 2017, anchor one of the top offensive lines in the league. Two-time All-Pro center Jason Kelce, two-time Pro Bowl right guard Brandon Brooks and left guard Isaac Seumalo pave the way in the middle. Brooks is returning from a torn Achilles tendon. If he can't start the season, Halapoulivaati Vaitai will take his spot.

The middle of the defensive line will be strong with All-Pro Fletcher Cox, Malik Jackson and Tim Jernigan but the end spot is an area of concern because Michael Bennett was traded to New England and Chris Long retired. Cox had a career-best 10 1/2 sacks. Jackson went to the Pro Bowl following the 2017 season. The team is counting on 2017 first-round pick Derek Barnett to reach his potential, and veteran Brandon Graham to not lose a step at the edge spots. Bennett was second on the team with nine sacks and Long was third with 6 1/2. Barnett only played six games before having season-ending shoulder surgery. Graham had just four sacks but signed a lucrative three-year contract to stay.