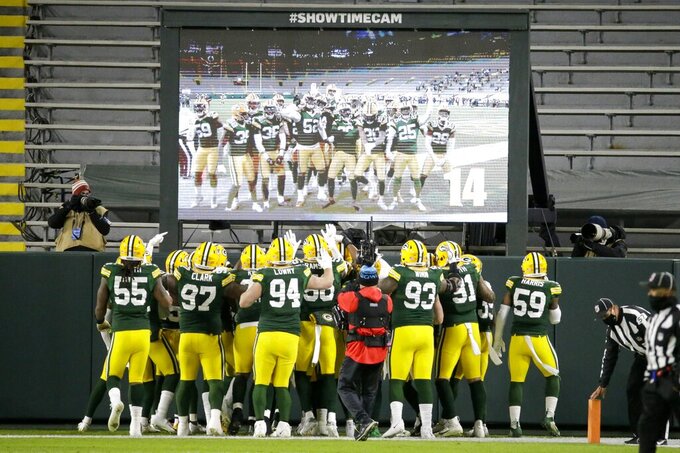 Green Bay Packers players help Darnell Savage celebrate his interception in the end zone during the first half of an NFL football game against the Chicago Bears Sunday, Nov. 29, 2020, in Green Bay, Wis. (AP Photo/Mike Roemer)

GREEN BAY, Wis. (AP) — The Green Bay Packers thrived on big plays from their defense last year, but didn’t produce nearly enough of them the first half of this season.

Green Bay (8-3) scored three touchdowns off turnovers Sunday night in a 41-25 victory over the Chicago Bears (5-6). The Packers have eight takeaways in their last four games after forcing just four turnovers in their first seven games.

The Packers’ 12 overall takeaways still put them in the bottom half of the NFL rankings and well off their pace from last year, when they forced 25 turnovers.

But they’ve picked up the pace and gotten more aggressive lately.

“As coaches, typically you get what you emphasize,” Packers coach Matt LaFleur said Monday. “Obviously, (we) did not do a good enough job emphasizing that early in the year. I think our guys are taking that to heart, they're taking it personal. They want to show everybody that they can be a great defense.”

Green Bay’s defense scored one touchdown on its own. After Za’Darius Smith sacked Bears quarterback Mitchell Trubisky to force a fumble, Preston Smith picked the ball up and ran 14 yards into the end zone to give the Packers a 27-3 lead.

Darnell Savage Jr. picked off two of Trubisky's passes, his first two interceptions of the season.

“I think everybody’s been doing their job and we’re talented enough to make those plays when we get our opportunities,” Savage said after the game. “We’re going to keep that up.”

Green Bay’s defense remains a work in progress. The Packers rank just 19th in the NFL in scoring defense and allowed David Montgomery to rush for 103 yards on just 11 carries Sunday. The Packers added some depth Monday by claiming defensive lineman Anthony Rush off waivers from the Bears.

But the Packers might be good enough on offense to make a deep playoff run by outscoring teams, as long as their defense can make a few big plays to help the cause. Aaron Rodgers threw four touchdown passes Sunday to continue his push toward a potential third MVP honor.

LaFleur raved about Rodgers after the game by saying, “this is as good as I’ve ever seen anybody play.”

“In my eyes, he’s an MVP player, no doubt about it,” LaFleur said. “And I wouldn’t want any other quarterback on our football team.”

Green Bay is scoring 31.7 points per game. The Packers scored touchdowns on their first three drives of the game and on two of their first three series in the second half. The offensive line lost center Corey Linsley and guard Lucas Patrick to injuries and still didn’t allow a sack.

The Packers’ defense let up a bit late in the game by allowing two fourth-quarter touchdown drives with the game out of reach. Over its last five games, the Packers have allowed Minnesota’s Dalvin Cook, Jacksonville’s James Robinson and now Montgomery to all exceed 100 yards rushing. Indianapolis rookie Jonathan Taylor rushed for 90 yards against the Packers last week.

Rodgers has thrown 33 touchdown passes with only four interceptions. He already has his highest single-season touchdown pass total since 2014, when he had 38. … WR Davante Adams has caught a touchdown pass in six straight games for the NFL’s longest active streak. … The entire offensive line deserves plenty of praise, but Elgton Jenkins and Billy Turner get special mention for making seamless position switches after injuries to Linsley and Patrick. Jenkins moved from left guard to center. Turner shifted from right tackle to right guard.

Mason Crosby’s having a very good season, but he missed an extra-point attempt after Green Bay’s first touchdown. Crosby is 40 of 42 on PATs and 13 of 13 on field-goal tries this season.

Linsley suffered a knee injury in the first half and Patrick hurt his toe in the second half. LaFleur said after the game he didn’t believe Linsley’s injury was a season-ending issue. Savage hurt his back while making his second interception.

Green Bay players are off until Wednesday as the Packers wait to find out whether injuries will require them to shake up their offensive line once more as they prepare to host the Philadelphia Eagles.