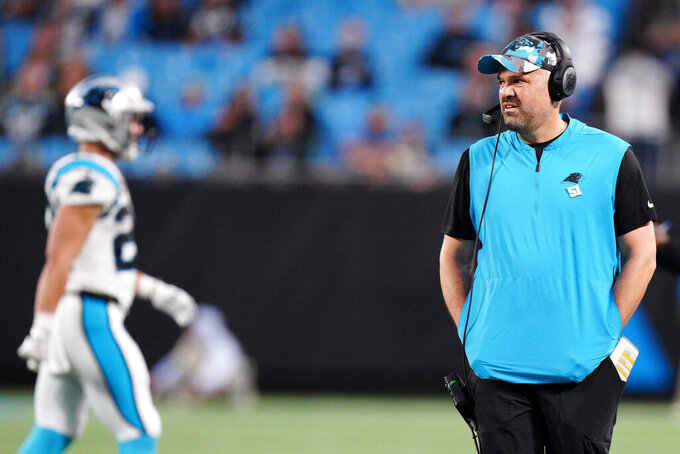 Carolina Panthers head coach Matt Rhule watches during the second half of an NFL football game against the Arizona Cardinals on Sunday, Oct. 2, 2022, in Charlotte, N.C. (AP Photo/Jacob Kupferman)

CHARLOTTE, N.C. (AP) — Matt Rhule remains confident he can turn around the Carolina Panthers even as pressure mounts on the team’s third-year coach to win.

Rhule is 11-26 so far in three seasons with the Panthers, and the team is off to another rocky start (1-3) with their offense ranked last in the league despite the offseason addition of 2018 No. 1 pick Baker Mayfield.

The Panthers have lost 10 of their past 11 games going back to last season and are just 5-14 at home overall under Rhule.

Rhule is three years into a seven-year, $62 million contract, meaning Tepper would have to eat more than half of that contract if he decided to fire the former Baylor coach — although money likely isn't much of an issue for the NFL's second-wealthiest owner.

The fan base's attitude has bordered on anger and apathy with more chants of “fire Rhule” cascading through half-empty Bank of America Stadium on Sunday after the Panthers allowed 23 straight points to the Arizona Cardinals after surrendering a 10-3 halftime lead.

Still, Rhule believes he can beat the odds.

“Each player on this team, we have high accountability,” McCaffrey said. “The matter of fact is we haven't been good enough. I'm in the meetings, and I know what's being coached. Bad football is not being coached."

When asked if he’s seen that accountability across the locker room, McCaffrey responded, “We’re getting it fixed.”

McCaffrey, one of the team's captains, said it's up to the players to turn things around and change the losing mentality.

“We have to make the plays when our numbers are called,” McCaffrey said. “And that's not happening right now. We have extreme urgency to get it done.”

Mayfield, in particular, has struggled this season.

Mayfield had three turnovers in Carolina's loss to Arizona and was booed in the fourth quarter by the fans that did stick around to see the finish.

“Nobody is happy with where we're at, plain and simple,” Mayfield said. “You can harp on it or look at the tape and get better and fix it. We have to do our job better and at a higher level. It's time for our offense to play well instead of relying on our defense and special teams to bail us out.”

Things likely won't get much easier in Week 5 against the San Francisco 49ers, who have allowed just 37 points on defense — tied for the second-fewest points allowed through four games by any NFL team since 2010. Only the 2019 Patriots allowed fewer (14).

Tepper has had more patience with Rhule than he had with former head coach Ron Rivera, who was fired midway through his second season of Tepper's tenure.

Rivera, Carolina's all-time winningest coach, was 14-19 at the time when he was let go.

Rhule said he meets with Tepper every week, but the two have not discussed his future.

“I’m not going to talk a lot about my conversations with Dave,” Rhule said. “He wants to win like everybody wants to win. He's a good owner and a good man and I’m going to keep doing the best I can for him.”

By Mark Anderson 18 minutes ago
By Teresa M. Walker an hour ago
By Arnie Stapleton an hour ago
3 hrs ago
By The Associated Press 6 hrs ago