Raiders in midst of another late-season collapse 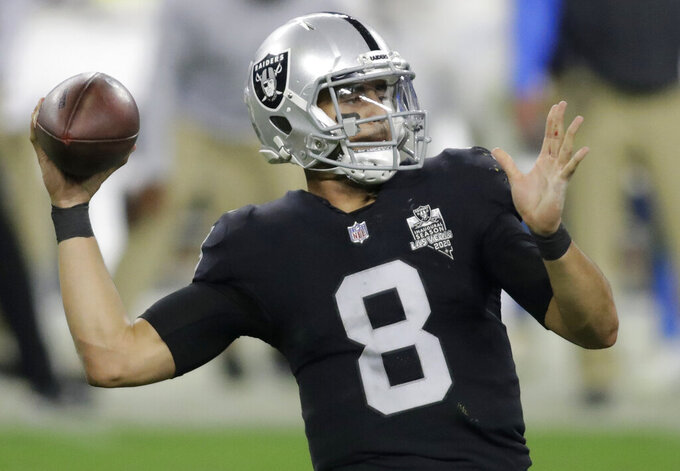 A promising start to the season followed by a December collapse.

Coach Jon Gruden’s third season back on the sideline for the Raiders is looking a lot like his second after they fell for the fourth time in the past five games with a 30-27 overtime loss to the Los Angeles Chargers on Thursday night.

After starting the season 6-3, the Raiders blew a late lead at home to Kansas City, got blown out at Atlanta, needed a last-second miracle to beat the winless Jets and then lost back-to-back home games to Indianapolis and the Chargers.

It’s a pattern that’s similar to last season when they started 6-4 only to lose five of their final six games to miss out on the postseason.

The Raiders haven’t officially been eliminated from playoff contention but their chances are on life support. They would need to win the final two games and then have a whole series of other events follow, including multiple losses by multiple other contenders.

“Anybody that doesn’t think we’re still in this is mistaken, and we need some things to go our way,” Gruden said Friday. “It would help if some of these officiating calls would go our way too, but we got to keep playing. We got to find a way to win our eighth game. If we can win our eighth game and get a little help around the league, we can stay in until the final week of the season like we were last year.”

Now the question will be who will start at quarterback in those games after Derek Carr left in the first quarter with a groin injury that leaves him as a “50-50” proposition to play next week against Miami, according to Gruden.

Marcus Mariota had an impressive Raiders debut, throwing for 226 yards and a touchdown and running for 88 yards and another score.

“What Marcus did last night was spectacular,” Gruden said. “When this kid is healthy, this guy is a special playmaker and I think he proved it last night.”

But he also had a late interception in regulation and was unable to punch it in on the opening drive of overtime as the Raiders settled for a field goal, opening the door for the Chargers to drive for the game-winning TD.

Passes to Darren Waller. The Raiders tight end once again had a big game, catching nine passes for 150 yards and a TD. That follows up a 200-yard, two TD performance two weeks ago against the Jets. Waller joins Hall of Famers Shannon Sharpe (twice) and Kellen Winslow (once) and former Raider Todd Christensen (once) as the only TEs with a pair of 150-yard games in the same season. Waller’s 425 yards receiving the past three games are the most ever in a three-game span for a tight end.

Pass rush. The Raiders once again failed to generate any consistent pressure against the quarterback in what has been a recurring problem all season. They had only one sack and had only a handful of quarterback hits. Maxx Crosby has gone five straight games without a sack and appears to be wearing down while playing 82% of defensive snaps.

Mariota. Mariota hadn’t seen the field all season since signing a contract that guaranteed him $7.5 million for 2020. But he quickly shook off rust and showed why Tennessee made him the No. 2 overall pick in the 2015 draft. He became the only player to record at least 200 yards passing and a TD, and 50 yards rushing and a TD in a game he didn’t start since at least 1948.

Trayvon Mullen. The second-year cornerback had been one of the few bright spots on defense this season but had a forgettable night against the Chargers. He was penalized four times, the most in a game for a single Raiders player in four years, and was beaten in coverage as well.

WR Hunter Renfrow is in the concussion protocol after getting hurt in the game. ... Gruden expects WR Henry Ruggs to return to practice late next week from the COVID-19 list and is hopeful DE Clelin Ferrell, LB Nicholas Morrow, CB Damon Arnette and S Johnathan Abram can return after missing the game with injuries.