Raiders struggle to find any positives on struggling defense 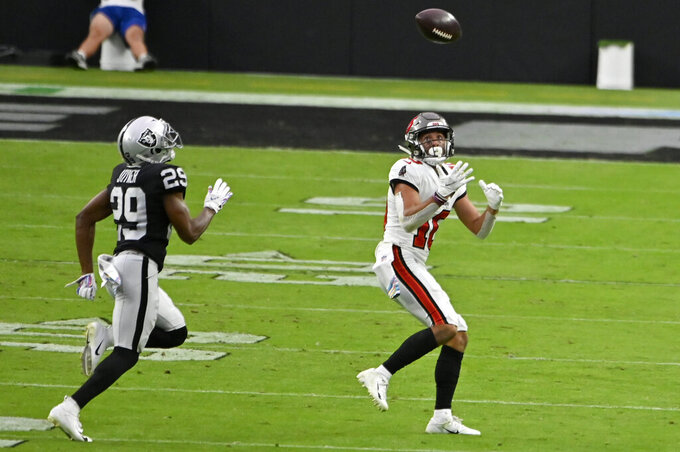 Finding positives in the performance of the Las Vegas Raiders defense this season isn’t an easy task.

When asked about the strength of his unit, coordinator Paul Guenther struggled to find anything before saying the Raiders have done “some good things” against the run.

There hasn’t been much that’s been good from the Raiders defense through six games this season as the team ranks last in the league in takeaways (three), 31st in points allowed (32.8 per game), 30th in yards per play allowed (6.29) and tied for 29th in sacks (seven).

The lack of production in the third year under Guenther has led to questions about whether he’s the right coordinator to fix the defensive problems that have plagued the Raiders for more than a decade.

“I don’t have time to pay attention to it,” Guenther said Thursday. “I come in here every morning, stay here late at night to try and put these guys in the best position to succeed. And like I said, I do the best job we can with the coaches that we have so we can do the best job with these players to put them in a position to make plays, and when those plays are there to be made we got to make the play.”

The Raiders just haven’t done a good enough job of making plays this season outside of one brief stretch of success in a Week 5 win at Kansas City.

The Raiders have allowed the second-most points through six games in franchise history and are the only team in the NFL this season to give up at least 24 points in every game as the lack of a consistent pass rush continues to be a problem ever since coach Jon Gruden traded away Khalil Mack before the 2018 season.

“We had a great meeting with the coaches,” Gruden said. “We had an opportunity to look at everything that we have done. We had a chance to really talk about our personnel extensively. We’re going to make some changes, no doubt, with the scheme. How much? I don’t know. But you’ll see some things that you didn’t see last week.”

Las Vegas showed signs of progress with a season-high 23 quarterback pressures and three sacks against Patrick Mahomes in the win at Kansas City. The Raiders held the Chiefs to one field goal during a six-drive stretch starting late in the second quarter to fuel the 40-32 victory.

They were unable to carry that over after the bye in a 45-20 loss to Tampa Bay when Las Vegas generated no sacks and hit Tom Brady only once.

“We just have to be more consistent,” defensive end Maxx Crosby said. “We have to be on the same page at all times. It can’t be one guy not knowing what the game is, one guy not on the same page as the guy next to him. That’s what we’ve been working on. We’ve been communicating and working on what we need to get better. I’m excited to get out there Sunday and do what we need to do.”

Crosby has four of the team’s seven sacks, but has gotten little help from the rest of the line. Defensive end Clelin Ferrell, the fourth overall pick in 2019, has no sacks so far this season, and free agent defensive tackle Maliek Collins has made a minimal impact after being called the key to the defense by Gruden.

Big-ticket linebacker Cory Littleton has been a major disappointment so far after signing a three-year, $35.25 million contract as a free agent.

While second-year cornerback Trayvon Mullen and safety Johnathan Abram have shown flashes, the secondary has been a problem as well.

Gruden said earlier this week that he doesn’t anticipate any trades before next week’s deadline, meaning the pieces in place are probably the ones that will need to perform if the Raiders are going to improve.

“We always try to keep developing those guys and putting them in the best spot to succeed and that’s what coaching really is, is trying to get your guys with the assets that you have, understand strengths and weaknesses of those assets and put those guys in the best position to succeed,” Guenther said. “That’s all we try to do.”

By Dennis Waszak Jr. 2 hrs ago
By Tom Withers 3 hrs ago
By Kristie Rieken 6 hrs ago
By Steven Wine 7 hrs ago
By Rick Menning 23 hrs ago