Ravens, Browns have had struggles, but still contending 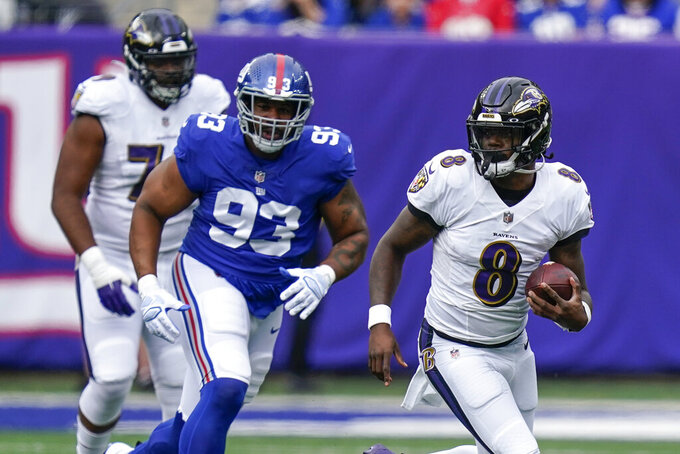 No matter how badly a weekend goes for the Baltimore Ravens and Cleveland Browns — and the most recent one certainly wasn't great — they can usually take some solace in the division standings.

Nobody ever seems to pull away in the AFC North, and that means a divisional matchup like this week's can be a nice opportunity to make things right.

“We’re not playing well, everyone knows that, it’s not a secret,” Cleveland safety John Johnson III said. “But the truth of the matter is that’s what’s in front of us and that’s what we can accomplish if we lock in 100 percent.”

The Ravens host the Browns on Sunday in a matchup between a Baltimore team that leads the division despite a .500 record — and a Cleveland team that's only one game behind. The Ravens have blown double-digit leads in the second half of all three of their losses, and the Browns have dropped three straight.

The four AFC North teams are separated by one game. It's not much different than last season, when first-place Cincinnati ended up just two games in front of Cleveland and Baltimore, which tied for last.

“If we win this game we’ll put ourselves in a situation to get that first-place spot, but it’s going to be one week at a time, one day at a time and it starts today,” Johnson said. “I think we’ve got to dominate today and go from there.”

Of all the teams in the division, the Ravens (3-3) may have the best chance to separate themselves. They've trailed, on average, for only 2:09 per game, but fourth-quarter collapses like last weekend's against the New York Giants have been a problem.

“The foundation is there,” Baltimore coach John Harbaugh said. "We know we’re playing good football (on) both sides of the ball. Just keep striving, keep trying to get better, keep building on what we’ve done in the past, and we’re going to be good.”

This game pits two of the NFL's top rushers against each other — although they produce their yards in vastly different ways.

Cleveland's Nick Chubb is No. 1 in the league with 649 yards rushing, and Baltimore quarterback Lamar Jackson is fifth at 451.

“He’s just a dynamic guy with the ball, it’s been that way probably his whole life,” Johnson said. “Every level he’s dominated with the ball in his hand, running and passing. I just think he’s one of one in this league. Very elusive, very sudden. I just think you got to have 11 guys running to the ball to contain him.”

Following his worst outing so far with Cleveland, Brissett spoke up in the locker room, promising his teammates he’ll be better and encouraging them to dig deep before the season slips away.

“Something needed to be said by somebody, and as the quarterback, as the leader of the team, I felt the liberty to do that,” he said. “I only do it because I hope people will listen because I need to hear it myself. So hopefully it translates. I think it will.”

The Browns heard him.

“That’s Jacoby,” Chubb said. “He’s a great leader, a great vocal leader. He meant every word. As a team, we all felt it. We all feel the same way.”

GO TO THE REPLAY

On their visit to Baltimore last season, the Browns had a perfect game plan for Jackson and intercepted him a career-high four times.

While Cleveland’s offense failed to capitalize on the turnovers, the defense’s schemes worked against Jackson, who was flushed into making bad decisions.

As their unit struggles to find consistency this season, Cleveland’s defensive players said looking at the video of their success against Jackson is both good prep work for this week and a confidence rebuilder.

Not surprisingly, New England coach Bill Belichick focused on stopping what the Browns do best, stacked the line of scrimmage and limited them to 70 yards rushing.

It figures to be just as tough this week. The Browns will be missing Pro Bowl guard Wyatt Teller, who is out with a calf injury.

The Ravens didn't get much production from their wide receivers last weekend with Rashod Bateman (foot) sidelined. Bateman was at practice this week, but Baltimore also added veteran DeSean Jackson to the practice squad.

“He looked like the DeSean when he first got to the league,” Lamar Jackson said. "Still floating around, running great routes. I’m excited.”