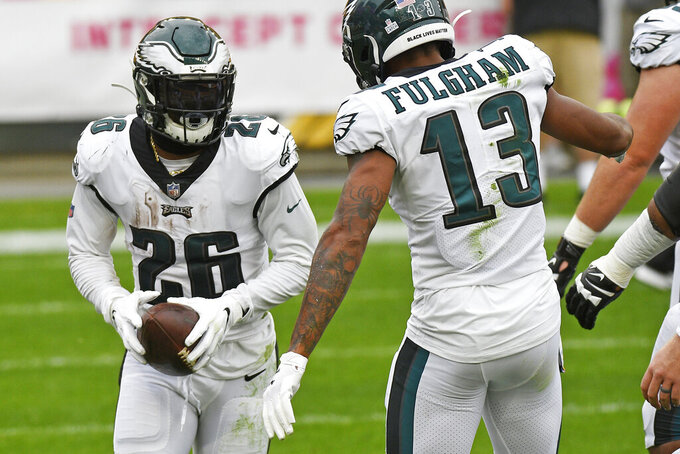 Philadelphia Eagles running back Miles Sanders (26) celebrates his touchdown with Travis Fulgham(13) during the first half of an NFL football game against the Pittsburgh Steelers in Pittsburgh, Sunday, Oct. 11, 2020. (AP Photo/Don Wright)

“I just told him just keep doing what you’re doing and you’re going to have a big game,” Roethlisberger said.

A historic one too.

Claypool scored four touchdowns, including the clincher on a 35-yard dart from Roethlisberger with 2:59 to go, and the Steelers remained unbeaten with a 38-29 victory over the Philadelphia Eagles on Sunday.

The 22-year-old second-round pick out of Notre Dame dashed into the end zone on a 2-yard jet sweep in the first quarter, sprinted away from defenders on a 32-yard catch-and-run in the second, danced across the goal line on a 5-yard wide receiver screen in the third and finished off Philadelphia in the fourth when Roethlisberger audibled to a play Claypool had never run before, at least while lined up in the slot.

At the snap, however, the 6-foot-4, 238-pounder from Abbotsford, British Columbia, Canada, never hesitated, racing past overmatched Eagles linebacker Nate Gerry and into the end zone.

“We changed the play,” Roethlisberger said. "I can’t say enough about Chase getting down the middle of the field and make a play for us.”

Claypool became the first Steelers player to score four times in a game since wide receiver Roy Jefferson did it in 1968. He's also the first rookie since at least 1950 to catch three touchdowns and add another on the ground and the first Canadian to have three scoring tosses in one game since Joe Rooney of the Duluth Eskimos on Oct. 23, 1927, six years before the Steelers were established and more than seven decades before Claypool was born.

“It is definitely insane, it’s crazy,” said Claypool, who hauled in seven passes for 110 yards and added 6 yards rushing on three carries. "But I don’t really like to think about breaking records or making history. It’s super cool but it’s not something I go into the game thinking ‘I’m going to try to make history today.’”

The Steelers (4-0) needed every one of them after nearly squandering a 17-point third-quarter lead while letting the Eagles (1-3-1) convert 10 straight third downs.

Carson Wentz threw for 258 yards and two scores to go with two interceptions and moved Philadelphia in position to take the lead with just over three minutes to play. Jake Elliott's 57-yard field-goal attempt drifted right, however, and Roethlisberger turned to Claypool one last time.

Pittsburgh took over and a personal foul facemask by the Eagles pushed the Steelers into Philadelphia territory. Facing third-and-8 from the Eagles 35, Claypool — who'd had a touchdown earlier in the quarter called back due to what he called an “awful” offensive pass interference call — listened to Roethlisberger's instructions and found himself against the smaller, slower Gerry. Next thing he knew Roethlisberger was looking his way — again — and he was in the end zone.

“You’ve got to make those plays,” Claypool said. "(Roethlisberger) is trusting you. He’s putting the ball where it needs to be. You make the plays and the trust builds faster.”

Eagles running back Miles Sanders ran for 80 yards and two scores in his return to his hometown. Travis Fulgham caught 10 passes for 152 yards and a touchdown to give Philadelphia's injury-ravaged receiving group a needed boost but the defense forced just one punt after the first quarter and allowed the Steelers to convert 11 of 15 third downs.

“We need to get off the field and get a win," Eagles defensive tackle Fletcher Cox said.

Despite the loss, Philadelphia remains in the thick of things in the awful NFC East, where no team has a winning record.

“We’re so close,” Wentz said. "We can get this turned around. I’m confident we will. We’re frustrated. Don’t get me wrong. This isn’t where we want to be. I have confidence in the coaching staff and players to fix things and get going.”

A showdown between two of the best pass-rushing teams in the NFL never really materialized. The Steelers sacked Wentz five times to extend their streak of consecutive games with a sack to 61, the fourth longest in NFL history. The Eagles, who came in leading the league in sacks this season, only managed to take Roethlisberger down once.

Roethlisberger gave credit to both the Steelers offensive line and offensive coordinator Randy Fichtner, who “threw the kitchen sink” at Philadelphia in order to slow up the front seven.

“Those guys up front really got after us today, made some things uncomfortable for us, so we had to throw some different looks and different formations and reverses and personnel,” said Roethlisberger, who completed 27 of 34 passes for 239 yards and the three scores to Claypool. “And we persevered.”

Eagles: OL Lane Johnson was carted to the locker room in the third quarter with an ankle injury. Johnson has been dealing with a balky ankle all season and underwent a procedure last week to remove a cyst that had been bothering him. LB Duke Reily left in the fourth quarter with an undisclosed injury.

Steelers: Lost Pro Bowl left guard David DeCastro in the first quarter with an abdominal injury. Rookie Kevin Dotson filled in. WR Diontae Johnson left with a back injury and did not return getting hit awkwardly during a first-quarter punt return.

Eagles: Start a three-game homestand next Sunday against Baltimore.

Steelers: Finish a stretch of four straight games at Heinz Field when they host Cleveland next Sunday.