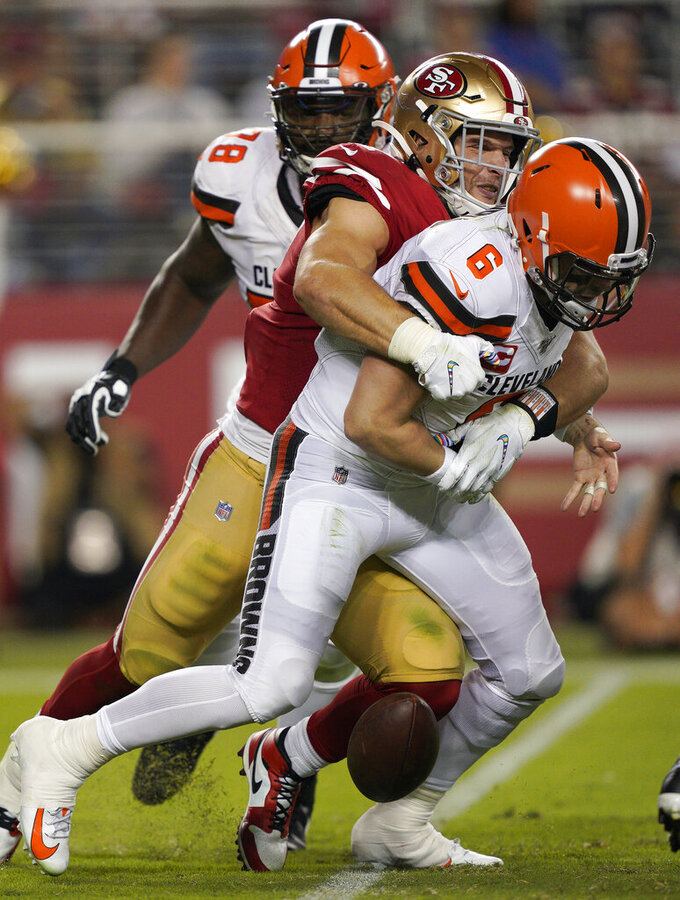 CLEVELAND (AP) — Baker Mayfield apparently offended Richard Sherman and paid for it. Mayfield got hunted, bear-hugged, sacked and mocked by Nick Bosa in front of a national TV audience.

On a trip out west, the Browns went south.

The 49ers utterly beat them down.

Mayfield was under siege by San Francisco's ferocious defensive front and played the worst game of his young career Monday night, and Cleveland's lines were overpowered throughout a 31-3 loss to the 49ers that has raised new questions about the Browns' quarterback, coach Freddie Kitchens and the future.

After five games, the Browns (2-3) are an enigma. Good one week, bad the next. This time, brutally bad.

The high expectations placed on the Browns during the preseason, a rosy outlook based solely on talent and potential, not only seem unfounded but unfeasible.

Against the well-rested and underrated Niners, Mayfield threw two of his league-high eight interceptions, got sacked four times, finished with just 100 yards passing and a 13.4 rating.

He inadvertently set the tone for the dismal performance before kickoff, when Sherman said the Browns' brash QB disrespected him by not shaking his hand before the coin toss. Sherman insisted the slight motivated him and the Niners.

"That's some college (stuff)," Sherman told NFL Network. "It's ridiculous ... shaking hands with your opponent — that's NFL etiquette. And when you pull bush league stuff, that's disrespectful to the game. And believe me, that's gonna get us fired up."

Sherman backed off a bit when video surfaced of his chilly pregame exchange with Mayfield, who appeared to shake the cornerback's hand.

"So you don't see any difference in the way I shake everyone else's hand and the guy who stands back with the petty shake," Sherman said on Twitter when challenged about his claims.

One of Mayfield's college stunts also came back to haunt him.

Bosa, the No. 2 overall pick from Ohio State, pressured Mayfield into an intentional grounding call and celebrated by pretending to wave and plant a flag. The gesture was aimed at Mayfield, who in 2017 tried to impale an Oklahoma flag into the turf at Ohio Stadium after leading the Sooners to a win over the Buckeyes.

"He had it coming," said Bosa.

There's no denying Mayfield and the Browns, who played a strong all-around game last week in a win at Baltimore, are a target.

All the hype has made them one of the league's top attractions — probably long before they deserved to be. But it has also built them up to be dragged down as they're facing adversity and the scrutiny that comes along with being on magazine covers and network commercials.

Mayfield has brought some of it on with his attitude and antics — old and new.

It all starts with him, and until they start winning consistently, he and the Browns will be under attack.

"Once again, we're not hitting the panic button," Mayfield said. "For us, we know the problem. We know we have to be better and do better. When you play a great team, you have to eliminate mistakes. We know exactly what we need to do. We need to play well."

Running back Nick Chubb gained 87 yards on 16 carries, but his production was curtailed by a huge deficit and Cleveland needing to throw to catch up.

Chubb only had one catch and Kitchens may need to find more ways to get him involved in the passing scheme.

Mayfield seems to be regressing. He's not sensing pressure well or stepping up in the pocket to make throws. For the second week in a row, he only completed two passes to star Odell Beckham Jr., who has been a good citizen and teammate and hasn't publicly grumbled about not getting the ball.

Kitchens was creative in using Beckham in the backfield, but the Browns' inability to have Mayfield complete passes to the team's best offensive threat is alarming.

Rookie punter Jamie Gillan continues to be a bright spot. He averaged 56.7 yards on seven kicks, one a 71-yarder and pinned the Niners inside their 20 four times.

There are other factors involved, but Mayfield is playing poorly. Period.

He's got just four TD passes in five games. He seems hesitant at times, panicky at others. He's sailing throws and locking in on receivers, a habit that will be exposed by pro defensive backs.

Kitchens is accepting some of the blame, contending he needs to put his young QB in better situations to succeed. But it comes down to Mayfield making plays and he's not.

"Some of it has to do with the lack of protection. Some if it had to do with a couple bad throws, a couple bad decisions," Kitchens said. "We had some drops. You can't do those things and play the quarterback position at an elite level."

Kitchens said the Browns avoided any major injures other some "bumps and bruises."

275 — The number of yards rushing by the Niners, who simply lined up and ran the ball down Cleveland's throat.

It doesn't get any easier for the Browns, who will host Seattle on Sunday. The Seahawks will come in fresh after not playing since Oct. 3.