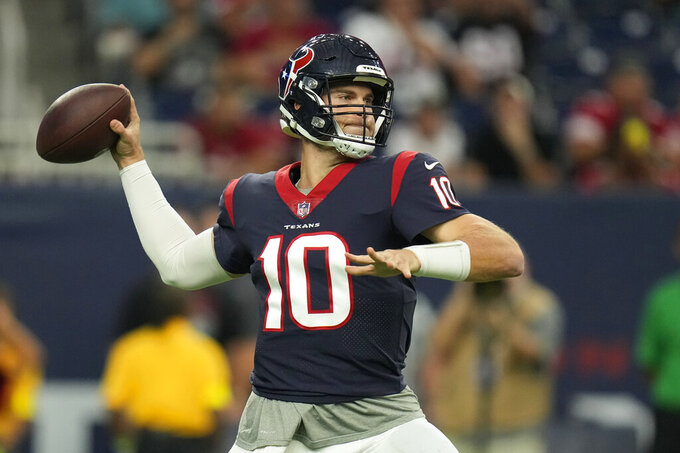 NASHVILLE, Tenn. (AP) — Another year, yet another new starting quarterback for the Indianapolis Colts brings high expectations that this time Matt Ryan will put them back atop the AFC South.

Then there's the defending two-time divisional champ. The Tennessee Titans insist they aren't paying much attention being given to the Colts.

“I’ve been here long enough to understand that we’ve never been the talk of the town,” Titans two-time All-Pro safety Kevin Byard said. “I mean, that’s just what it is. It’s not necessarily that I prefer it that way.”

The Titans have put together six straight winning seasons with playoff berths in four of the past five seasons. Tennessee survived using an NFL-record 91 players — most ever in a non-strike season — to earn the AFC's No. 1 seed for 2021. They also have a healthy Derrick Henry back.

“Who’s finished stronger?” Byard said. “So that’s really what it’s about for us, and for me just try to make sure as a team we’re just staying locked in on the now and not worried about what they’re saying about the rankings and Madden ratings and all this stuff because it doesn’t matter.”

The Jaguars and Texans both have new coaches. Jacksonville has spent tens of millions rebuilding its defense and giving Trevor Lawrence help. Houston needs to see if Davis Mills can be an NFL starting quarterback.

Colts owner Jim Irsay's impatience is high after one playoff win in seven seasons and Indianapolis missing the postseason twice in three seasons.

Irsay, and the rest of the Colts, see the NFL's 2016 MVP as the quarterback who can avoid the issues that cost them a playoff berth last season with Carson Wentz. Ryan is poised to be the Colts' sixth consecutive different starter on opening day.

“We’re really, really excited," Irsay said. "I think we have a reason to be.”

The Colts also have NFL rushing leader Jonathan Taylor back. Three-time All Pro left guard Quenton Nelson anchors an offensive line that will have two new starters with Matt Pryor likely at left tackle and Danny Pinter at right guard.

General manager Chris Ballard also traded for defensive end Yannick Ngakoue and signed Stephon Gilmore, the 2019 AP NFL Defensive Player of the Year. Three-time All-Pro linebacker Shaquille Leonard is expected back for the start of the season despite being on the physically unable to perform list since back surgery in June.

The NFL's two-time rushing leader insists his foot is healthy again. Henry was on his way to a third straight title when he broke a bone in his right foot Oct. 31 at Indianapolis. Henry still finished ninth in rushing despite missing nine games, and he went for a surgical repair designed to keep his foot strong for the long haul.

The Titans gave Ryan Tannehill more help on offense. They traded for receiver Robert Woods and swapped A.J. Brown for the 18th pick overall in April when contract negotiations turned into a trade request. Treylon Burks has shown flashes of being the physical, fast and strong receiver Brown was for them the past three seasons.

They also signed tight end Austin Hooper and drafted a new right tackle in Nicholas Petit-Frere and tight end Chig Okonkwo. Cornerback Roger McCreary, a second-round draft pick from Auburn, could be the lone new starter on a defense that was the NFL's sixth-stingiest scoring unit in 2021.

The Jaguars have another new coach, this time in Doug Pederson, a young quarterback in Trevor Lawrence and confidence that this time they've made all the right moves to turn around a franchise whose four wins combined over the past two seasons are the fewest in the NFL in that span.

Jacksonville has spent more than $200 million in free agency over the past two years along with all the draft capital earned from those poor finishes to stockpile talent.

Houston is on its third different coach in as many seasons with Deshaun Watson finally gone and no longer the Texans' problem. Now Lovie Smith faces rebuilding a franchise that won the AFC South as recently as 2019.

Smith is working on a run-focused offense to help Davis Mills and gauge whether the third-round pick out of Stanford in 2021 can be the quarterback who finished the final month with eight touchdown passes and only two interceptions. Left tackle Laremy Tunsil is back after missing 12 games because of thumb surgery.

The Texans will have to be patient with their rookies. Cornerback Derek Stingley Jr., the third overall pick, was limited this preseason after surgery to repair a torn foot ligament but is expected to be ready for the opener. Offensive lineman Kenyon Green, the 15th pick overall, dealt with an injured knee and concussion in camp.