Young Bucs secondary braces for another dose of Tyreek Hill 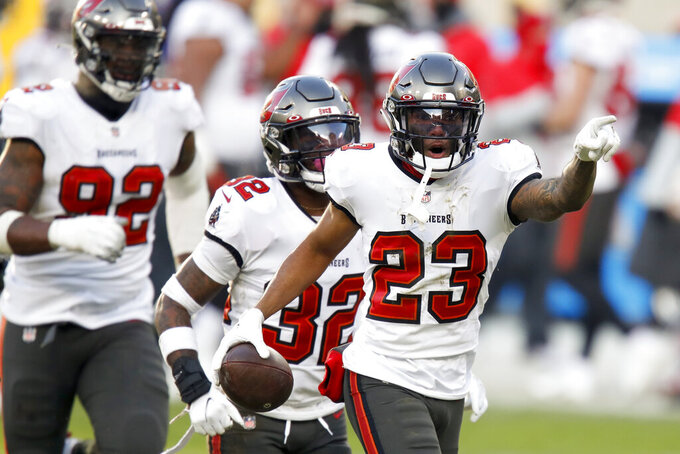 TAMPA, Fla. (AP) — Like most NFL cornerbacks, Carlton Davis plays with a short-term memory but never forgets a bad performance.

The third-year pro and the rest of Tampa Bay’s young secondary was dominated by Tyreek Hill during the regular season and are eager to redeem themselves against the speedy Kansas City Chiefs receiver in the Super Bowl.

Hill had 13 receptions for 269 yards and three touchdowns in a 27-24 victory over the Bucs on Nov. 29. He had seven catches for 203 yards and a pair of TDs in the opening quarter alone, with Davis primarily playing single coverage.

“I play defensive back in the NFL, so you’re going to have your share of losses. It doesn’t change who I am or what I do or how I approach the game. I’m going to continue to be a dog and go out there and give it my all,” Davis said.

First of all, Dean didn’t play in the earlier game. And, as Davis noted, the secondary — comprised of four starters and a pair of key reserves drafted over the past three years — has played much better in helping Tampa Bay go 7-0 since the loss to the Chiefs.

“We’re just going to go out there and do what we do. It’s not about them, it’s always about us. The more you make it about them, the more it becomes about them,” Davis said.

“I’m going to always be myself. It didn’t work out the first game as far as what we did in our game plan, but we corrected it,” Davis added. “We’ve got a great game plan going in, but I’m going in with the same mentality and that’s to dominate.”

Davis led the Bucs with four interceptions this season. Sean Murphy-Bunting, a second-round draft pick in 2019 who’s bounced back from injuries to play a key role in the postseason, had interceptions in each of Tampa Bay’s three playoff victories.

Bowles made some adjustments after the first quarter of the Week 12 meeting against the Chiefs, who built a 17-point lead before Tom Brady got the Bucs offense going in the fourth quarter.

Murphy-Bunting felt the secondary held its own against Hill, Travis Kelce and the rest of Kansas City's talented playmakers after the slow start, proving to themselves that they can play with the defending Super Bowl champions.

Davis said the secondary continues to grow as a group, motivated in part by naysayers who’ve portrayed them as a liability for much of the season.

The 24-year-old is still bothered, though, by a preseason ranking he read that listed Tampa Bay’s defensive backs last among 32 teams.

“Just imagine you coming to work every day doing your job and not only you’re not getting credit, but people are saying you’re not doing your job. People just aren’t realizing what you’re doing, and it’s frustrating. Not just for me, but for all of my guys and that’s definitely something that we carry on our shoulder,” Davis said.

“We’ll continue to carry it, not even until we get out respect, just until we’re done playing because it’s something that you never forget. It’s something that’s always on mind,” he added. “To be slept on is one of the worst feelings ever, so that’s definitely our driving force.”

Bowles, understandably, is encouraged by the way the defense performed in playoff wins at Washington, New Orleans and Green Bay in the NFC championship game.

“We’ve been very opportunistic in the back end,” Bowles said. “They’re coming together and making plays at the right time. They smell blood, and they go after it.”