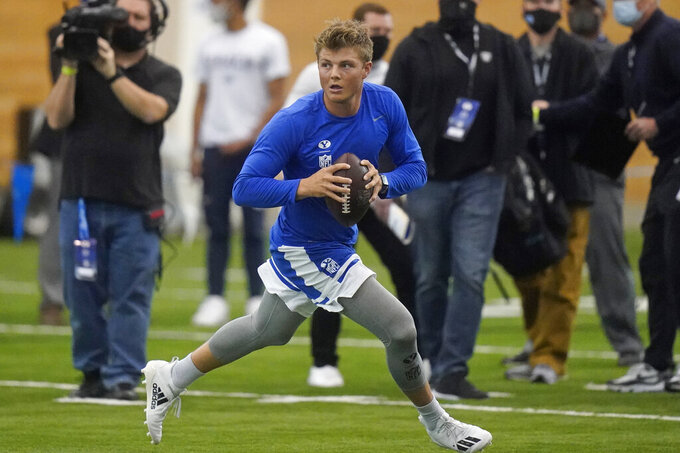 PROVO, Utah (AP) — Zach Wilson gave observers a taste Friday of why he's projected to go higher in the NFL draft than any BYU player before him.

“The goal of today was to show what makes me different, the type of throws that I can make that I feel like other guys don’t practice and don’t try and do,” Wilson said.

Wilson skipped running the 40-yard dash and other drills as a precautionary measure after tweaking his hamstring two weeks ago. He trained to do everything as recently as January and then shifted his focus exclusively to passing drills so he could be in peak form as a passer Friday.

“We didn’t have a combine, so I didn’t want to do everything on the pro day and not be able to throw,” Wilson said. “That was the most important thing for me.”

Wilson emerged as a top quarterback prospect after a breakout 2020 season. He threw for 3,692 yards and 33 touchdowns while completing 73.5% of his passes and throwing only three interceptions. As a junior, Wilson led the FBS in touchdown to interception ratio. He ranked second nationally in completion percentage and third in total passing yardage and passing touchdowns.

His accuracy and ability to extend plays helped BYU go 11-1 in 2020 and finish the season ranked No. 11 – the school’s highest final AP Top 25 ranking since 1996. Wilson’s leadership also helped drive the team to a higher level on the field.

“I can tell he’s having fun out there,” said receiver Dax Milne, Wilson’s top target who finished with 1,188 yards and eight touchdowns on 70 catches in 2020. “This is what he loves to do. This is what we all love to do. He’s done a great job of handling all the hype.”

Some questions exist about Wilson’s durability given his light frame. He's 6-foot-2, 214-pounds. Wilson also underwent shoulder surgery between his freshman and sophomore seasons. A thumb injury also hampered him during his sophomore campaign and sidelined Wilson for four games.

Wilson made a conscious decision to get the shoulder surgery two years ago to correct a recurring problem that cropped up during his high school football career, in part, so he could show NFL teams his body would hold up at the next level.

“It feels great,” Wilson said. “I have no issues. It’s stronger than it was before. I’m glad I got it done.”

Sixteen other players participated in the pro day, including Milne and offensive lineman Brady Christensen, who also declared for this year's draft following their junior seasons.