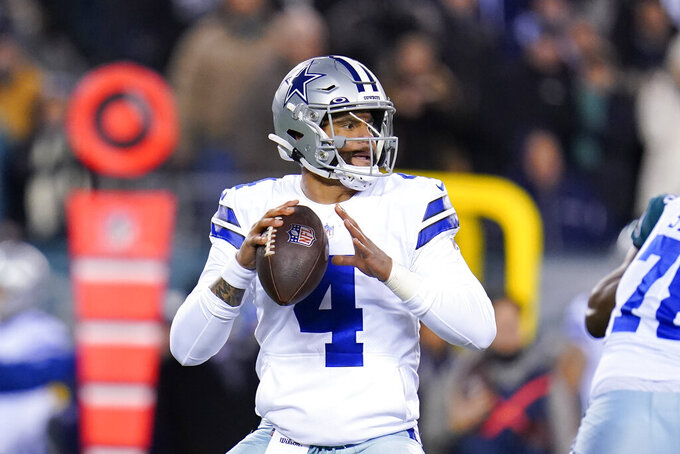 Dallas Cowboys quarterback Dak Prescott looks to pass during the first half of an NFL football game against the Philadelphia Eagles, Saturday, Jan. 8, 2022, in Philadelphia. (AP Photo/Julio Cortez)

BETTING LINE: Cowboys by 3, according to FanDuel Sportsbook.

TURNOVER DIFFERENTIAL: 49ers minus-4; Cowboys plus-14.

49ERS PLAYER TO WATCH: WR Deebo Samuel has been one of the NFL’s most versatile players, excelling as a receiver lined up wide or in the slot or a running back out of the backfield. He even threw a TD pass last week. Samuel finished the season with a career-high 77 catches for 1,405 yards to go with 365 yards rushing and 14 total TDs. Samuel is the only player in NFL history with at least 1,400 yards receiving and 300 yards rushing in a season.

COWBOYS PLAYER TO WATCH: QB Dak Prescott plays his first playoff game since signing a club-record $160 million, four-year contract during the offseason. While the Cowboys led the NFL in points and yards per game, there were pockets of inconsistency that led to plenty of questions about the 2016 NFL Offensive Rookie of the Year. Prescott led the league with a club-record eight games of a passer rating of at least 100 and at least three touchdowns passing. It means nothing if he loses the first game of the playoffs for the second time in three trips over six seasons.

KEY INJURIES/COVID-19: Niners LT Trent Williams (elbow) missed last week’s game, but is aiming to be back Sunday. ... QB Jimmy Garoppolo played through a sprained right thumb last week. ... Standout rookie LB Micah Parsons and eight-time Pro Bowl LT Tyron Smith were activated off the COVID-19 list after missing the Philadelphia game. ... S Jayron Kearse, a surprisingly key defender in part because of his versatility against the run and pass, didn’t come off the COVID-19 list until Thursday and also has been battling a hamstring injury.

SERIES NOTES: It’s the first postseason matchup between the old playoff rivals since three straight NFC championship games during the 1992-94 seasons. The winners of those games (Dallas the first two, San Francisco the third) won the Super Bowl. ... It’s their eighth playoff meeting, tied for second most in the Super Bowl era behind nine between Dallas and the Los Angeles Rams. ... The Cowboys lead the playoff series 5-2, including 2-0 at home.

STATS AND STUFF: The 49ers made the playoffs for the second time in five seasons under Kyle Shanahan after losing the Super Bowl to Kansas City two years ago. The Cowboys last qualified in 2018. A Dallas victory would tie San Francisco for the most home playoff wins in NFL history (22). ... San Francisco has made it to the conference title game in its past four playoff appearances. The Cowboys haven’t been that far since the last of the franchise’s five Super Bowl titles to end the 1995 season. Dallas has reached the playoffs 10 times since then. The Cowboys have won their past three wild-card games (2009, 2014 and 2018 seasons), all at home. ... The 49ers are 18-7 on the road the past three seasons, the second-best record in the NFL. ... Garoppolo will make his fourth playoff start. Garoppolo completed 63.8% of his throws for 142.3 yards per game with two TDs, three INTs and a 75.9 rating in the playoff run two years ago. ... San Francisco was tied for the fifth-most sacks in the NFL this season with 48, led by 15½ for DE Nick Bosa. He also tied for the NFL lead with 21 tackles for loss. ... Niners RB Elijah Mitchell had a franchise rookie record 963 yards rushing this season and led all rookies with five 100-yard games. He finished with 1,100 yards from scrimmage and six TDs in 11 games. ... San Francisco WR Jauan Jennings had career highs last week with six catches for 94 yards and two TDs. ... The 49ers led the NFL by scoring TDs on 66.7% of red zone drives. ... San Francisco was penalized a league-high 20 times for pass interference for 367 yards. ... Coach Mike McCarthy is making his playoff debut with the Cowboys in his second year. He took Green Bay to the postseason nine times, including eight straight, in 12-plus seasons before getting fired midseason in 2018. The Packers won the Super Bowl to cap the 2010 season at the home of the Cowboys, and the last of McCarthy’s 10 playoff victories with Green Bay (10-8 record) was over the Cowboys when Prescott was a rookie in 2016. ... Dallas led the NFL in scoring (530 points, 31.2 per game) and takeaways (34). Six teams have done that since the 1970 merger. Two of the previous five won the Super Bowl: Washington in 1983 and Dallas in 1971 (the franchise’s first title). ... Prescott broke Tony Romo's franchise record for touchdown passes (37-36). He had an NFL-best eight games with a passer rating of at least 100 and at least three touchdowns passing. ... RB Ezekiel Elliott has averaged 103 yards (4.5 per carry) with two touchdowns in three playoff games. The two-time rushing champion had just two 100-yard games in the regular season, in Weeks 4-5. ... CB Trevon Diggs led the NFL with 11 interceptions. He can become the first player with double-digit picks in the regular season along with at least one in the playoffs since Antonio Cromartie with the Chargers in 2007. Everson Walls is the only Dallas player to do it, in 1981. ... LB Micah Parsons led NFL rookies with 13 sacks. The last Dallas rookie with a sack in the postseason was teammate DeMarcus Lawrence in a wild-card win over Detroit during the 2014 season.