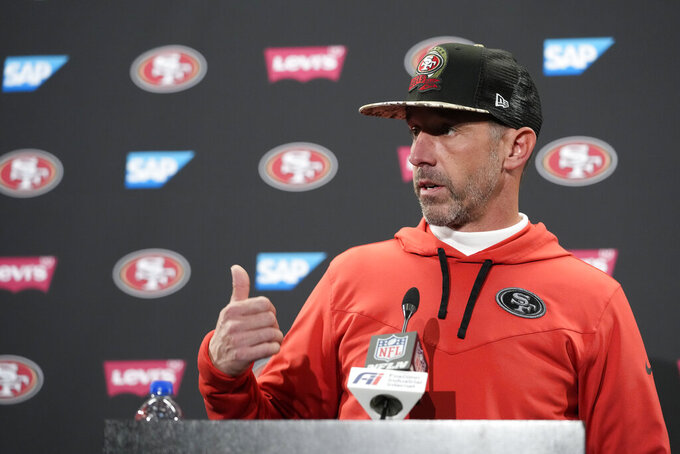 SANTA CLARA, Calif. (AP) — The challenge facing the San Francisco 49ers after quarterback Jimmy Garoppolo went down with a season-ending foot injury is all too familiar.

The hope in San Francisco is a more talented roster will be enough to help carry fearless rookie Brock Purdy the rest of the way.

The first returns were positive with Purdy throwing two touchdown passes in relief of Garoppolo in a 33-17 win over the Miami Dolphins on Sunday.

“I do also believe our team is built for this," coach Kyle Shanahan said Monday. ”We’re going to go out there and play football the best we can every week. That’s all we’ve done so far and that’s we’re going to continue to do moving forward. I think anyone who’s seen Brock in this building looks at Brock in that position and doesn't think any differently than we have all along."

Garoppolo is the second quarterback lost for the season this year for the 49ers, after Trey Lance went down with an ankle injury in Week 2.

While San Francisco was fortunate to have the proven Garoppolo in reserve back then, the situation now is more tenuous with Purdy.

The player who earned the “Mr. Irrelevant” moniker for being the last pick in the draft now is carrying the fortunes of one of the most talented rosters in the league.

“That’s just where I fell in the draft,” Purdy said. “I’m very thankful that I got drafted. I’ve always had confidence and belief in myself that I could play at this level.”

This marks the fourth time in six seasons under Shanahan that the Niners will be forced to use three starting QBs. In the other two seasons, Garoppolo was mostly healthy — starting 31 of 33 regular season games — and San Francisco went to the Super Bowl in 2019 and the NFC title game last season.

The Niners are just 9-29 under Shanahan when anyone other than Garoppolo starts, but most of those games came when the team didn't have a roster like the current one featuring the league's top defense and an offense with playmakers such as Christian McCaffrey, Deebo Samuel, George Kittle and Brandon Aiyuk.

“I got all the confidence in the world in Purdy,” linebacker Fred Warner said. "That’s a lot to ask of a rookie. Obviously being thrust into, in the position he is in, but at the same time, he doesn’t have to do too much. He has so many weapons on that side of the ball to just get the ball to, and his job is just to protect the football. We have a really good offense. He is in the best position possible.”

The Niners also signed veteran Josh Johnson, who spent time with San Francisco late in the 2020 season as a backup for Purdy.

Nick Bosa is making a strong bid for Defensive Player of the Year after getting three more sacks to give him a league-leading 14 1/2 on the season. Bosa had his second career game with at least three sacks and his ninth with multiple sacks. Bosa also had a forced fumble and extended his streak with a sack to six games, one shy of the franchise record last reached by Aldon Smith in 2012.

Limiting big plays. The Niners turned in another strong defensive effort, but were nearly done in by allowing two big plays. Tua Tagovailoa threw a 75-yard TD pass to Trent Sherfield on the opening play from scrimmage and a 45-yard TD to Tyreek Hill in the second half. San Francisco has allowed four TD passes of at least 45 yards this season, tied for the most in the NFL and gave up two in the same game for the first time since 2011 .

Shanahan's challenges. Shanahan won two on one drive in the fourth quarter, making him a perfect 4 for 4 this season. The first negated a third-down completion to Trent Sherfield, but Miami went for it on fourth and converted. The next negated a fourth-down conversion to Mike Gesicki, ending the Dolphins' best chance at a comeback.

Running game. The Niners finished with 121 yards on the ground, but averaged just 3.6 yards per carry that got a big boost from a late 30-yard run by McCaffrey. Eight of San Francisco’s 31 run attempts, excluding kneel downs, ended up going for no gain or negative yards with eight more carries going for just 1 or 2 yards.

Shanahan said Garoppolo was still undergoing tests but that doctors now believe he might have avoided the more serious Lisfranc injury. ... DT Hassan Ridgeway (pec strain) will be out for six to eight weeks. ... S Tarvarius Moore (knee sprain) will miss a few weeks. ... Bosa (hamstring irritation) will need to be managed during the week.

17 — This marked the fifth straight game when the Niners held the opponent to 17 points or fewer. This is the first time San Francisco has done that in the same season since doing it in the final six games in 1992.