Ails of November: Struggling Vikings fending off the gloom 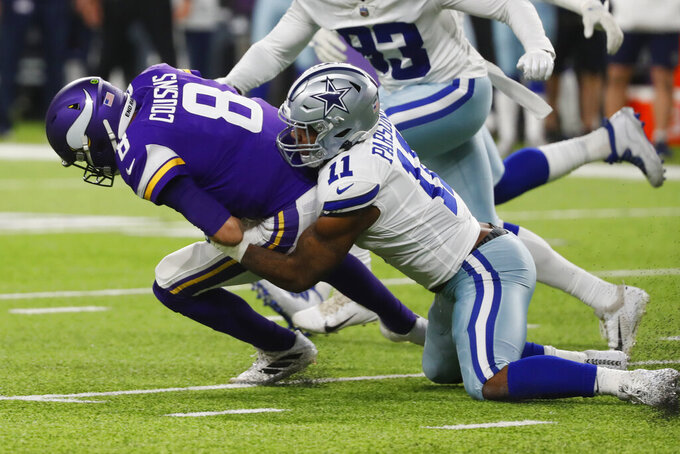 Minnesota Vikings quarterback Kirk Cousins (8) is tackled by Dallas Cowboys outside linebacker Micah Parsons (11) during the first half of an NFL football game, Sunday, Oct. 31, 2021, in Minneapolis. (AP Photo/Bruce Kluckhohn)

EAGAN, Minn. (AP) — Minnesota coach Mike Zimmer paused for a moment during his Wednesday press conference to pull a piece of paper out of his sweatshirt, looking down at the lectern to read from a list of cherry-picked statistics in suggesting the Vikings can recover and still contend this year.

With a 3-4 record and 10 weeks still left on the schedule, that's not at all unrealistic. One painful loss into a daunting four-game stretch, however, the Vikings have found themselves facing an additional opponent: gloom.

Not only did they fritter away chance after chance to beat a Dallas team playing a backup quarterback Sunday night, but they lost star defensive end Danielle Hunter to a season-ending injury for the second straight year. Their best cornerback, Patrick Peterson, will miss at least two more games to a hamstring injury. The offense took a big step backward after the bye, triggering occasional boos from the home crowd after certain exasperating sequences.

That all adds up to a rather tenuous hold on the job for Zimmer, who's in his eighth season with only two wins in the playoffs to show for it.

“I would say if you’re not frustrated, there’s something wrong with you, and you shouldn't be on this team,” wide receiver Adam Thielen said. “You shouldn’t be a coach, if you’re not frustrated. We want to win. We want to put the effort in — we do put the effort in — week to week, every single day at practice. We have the guys, quality guys, good football players, on this team to do it.”

Discouragement has the potential to run deep with Hunter, who hurt his neck in training camp last year and never saw the field. This time, he has a torn pectoral muscle, the same injury that knocked linebacker Anthony Barr out of action in the second game of 2020.

“Just got to be there to support him as best we can, let him know he’s not alone in this recovery and make him feel as supported as possible,” Barr said.

The Vikings play at Baltimore on Sunday and at the Los Angeles Chargers the following week, before a home game against Green Bay. Snapping out of a funk can happen fast in the NFL, but the tougher the foe, the slimmer the margin of error.

“I put it squarely on us captains, us leaders, us guys that have been here. It’s squarely on our shoulders to get these guys ready to go play and make sure we’re dialed in and ready to go in the football game,” running back Dalvin Cook said.

The young defensive ends will be getting the most attention in that preparation process for awhile, without Hunter. Everson Griffen has played remarkably well in his return to the Vikings this year and will certainly see his snap count increase now. That puts the onus on D.J. Wonnum to take some steps forward and the coaches to continue to coax that progress out of him. The same goes for backups Patrick Jones and Kenny Willekes.

“A lot of these guys when they’re young, they try to be perfect and they don’t just cut it loose. Danielle was kind of like that when he was a young guy. I’m sure these other guys will be a little bit like that, too,” Zimmer said.