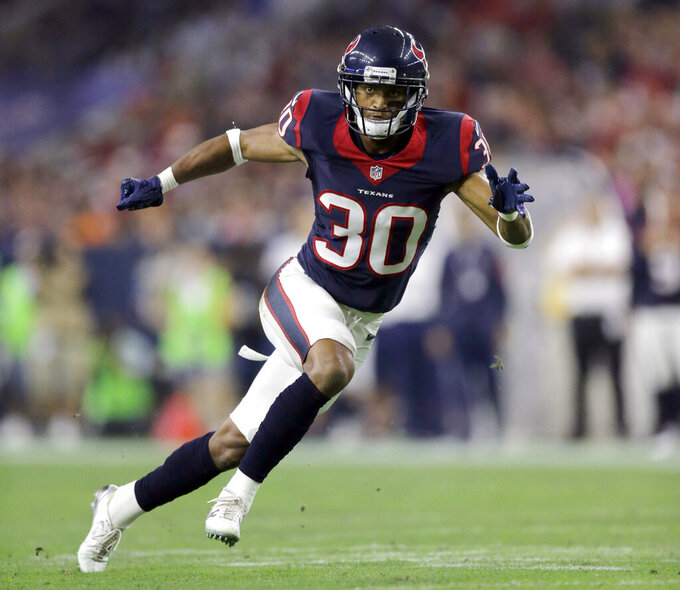 FILE - In this Aug. 22, 2015, file photo, Houston Texans' Kevin Johnson (30) chases a play during the first half of an NFL preseason football game against the Denver Broncos in Houston. Johnson is scheduled to meet with the Browns, a person familiar with the visit confirmed to The Associated Press, Thursday, March 7, 2019. Johnson, who was released earlier this week by the Texans, met with the Buffalo Bills on Wednesday. (AP Photo/Patric Schneider, File)

CLEVELAND (AP) — Free agent cornerback Kevin Johnson is scheduled to meet with the Browns, a person familiar with the visit confirmed to The Associated Press.

Johnson, who was released this week by the Houston Texans, is scheduled to be at the team's headquarters later this week, said the person who spoke on condition of anonymity because the team is not confirming visits.

The 26-year-old Johnson met with Buffalo on Wednesday.

Johnson only played in Houston's opener last season before he was placed on injured reserve after sustaining a second concussion. Injures have limited him to just 19 games over the past three seasons.

The Texans selected Johnson with the No. 16 overall pick in 2015. They released him to avoid paying his $9 million salary for 2019.

The Browns want to add depth to their defensive backfield and find a player to pair with Pro Bowl cornerback Denzel Ward.