Barkley believes the potential is there for another big year 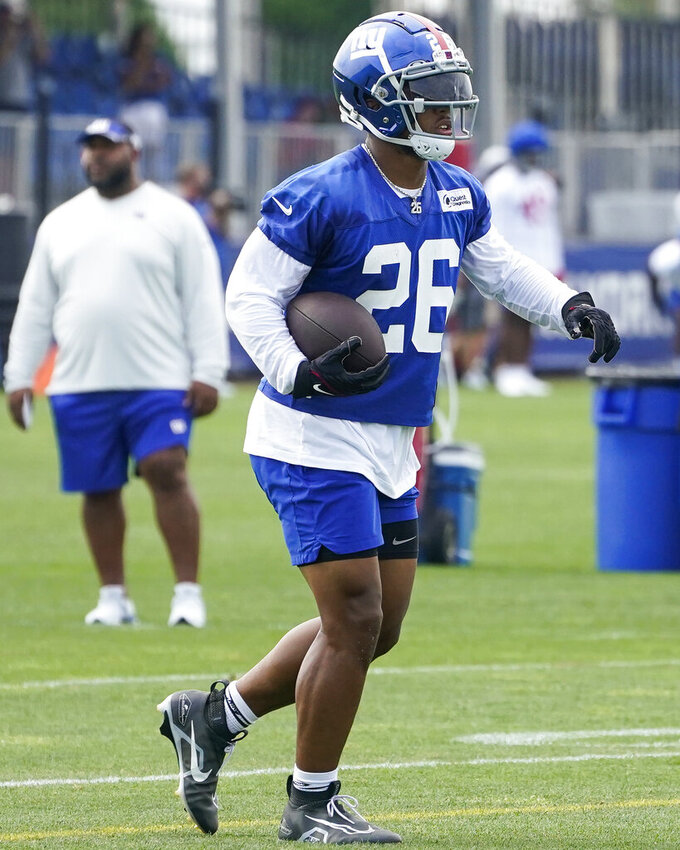 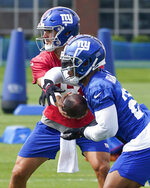 EAST RUTHERFORD, N.J. (AP) — Saquon Barkley strode to the podium in the New York Giants field house in a pair of white socks and wearing his trademark No. 26 necklace.

He was the same as always on Thursday on the second day of training camp, but with a slight difference.

Remarkably, this will be Barkley's fifth season with the Giants. Only wide receiver Sterling Shepard (2016) has more time with the team.

“I’m 25 now, in year five and one of the older guys in the building,” Barkley said. “I’ve been through a lot of ups and downs, but I got to use that to my advantage. I can use that to lead. Especially with some of the adversity that I’ve had to deal with in the last couple of years. I think that it’s not only helped me as an athlete but just as a person, as a man, as a brother, and as a teammate.”

It's easy to remember his rookie season when he rushed for 1,307 and 11 touchdowns and caught 91 passes for 721 yards and four more TDs. The No. 2 overall pick in the draft finished second to Dallas' Ezekiel Elliott (1,434) for the rushing title and led the league in total yards from scrimmage with 2,028. He was the league's Offense Rookie of the Year. The Penn State product added a second 1,000-yard rushing season in 2019 despite an ankle injury.

The past two years have been really tough. He tore an ACL in the second game of 2020 and missed the rest of the season. He came back last year after an extensive rehab and was limited to 593 yards rushing and two TDs and 41 catches for 263 yards and two TDs playing in a struggling offense. He also missed time with a freakish ankle injury, the result of stepping on the foot of Cowboys defender Jourdan Lewis after an incomplete pass.

Barkley is feeling good heading into this season with former Buffalo Bills offensive coordinator Brian Daboll coaching the team. But there are question marks. His contract runs out at the end of the season and it's hard to say whether he will ever be the same player who excelled as a rookie.

“I know what I am capable of doing and I know the talent that I have,” Barkley said after practice. “The way I kind of think of it is the same mindset I had when I first came into the league when everyone asked me what my expectations are, and this and that. The way I look at life is if I take care of the little things and take it day by day the rest will take care of itself.”

Daboll has changed the offense since taking over from Joe Judge. There is a lot more pre-snap movement and he has used Barkley a lot as a receiver in the first week of camp.

“So, our job is to figure out ways to use him, whether he did it last year or the year before, two years, in college,” Daboll said. “When you’re developing in a system, you kind of figure out what these guys do best, and you challenge them to do more.”

Barkley also should benefit from changes to the offensive line. Center Jon Feliciano and guard Mark Glowinski were signed as free agents and Alabama tackle Evan Neal was drafted with the No. 7 pick overall, giving New York bookend tackles with Andrew Thomas.

Veteran defensive back Julian Love smiles when asked about Barkley.

“That dude is the ultimate competitor in everything he does,” Love said. “He’s talking. He talking all that stuff because it fires him up. And so to see him running around and competing and being able to produce right now and go battle with us, I mean, that’s huge. I’m excited for him."

NOTES: Daboll is going to let offensive coordinator Mike Kafka call the plays in training camp and preseason games. Whether he does it for the regular season is not determined. Daboll called the plays in Buffalo the past four seasons. ... DE Leonard Williams practiced in a torn shirt on Wednesday after an offensive lineman grabbed his jersey. He wore a new one Thursday. “I was joking around to the offensive line like, ‘Yeah, you guys have got to do all this to stop me.’ But you know, it’s friendly competition and that type of stuff happens when you’re going full speed.” .... New York signed LB Austin Calitro and waived LB Justin Hilliard.