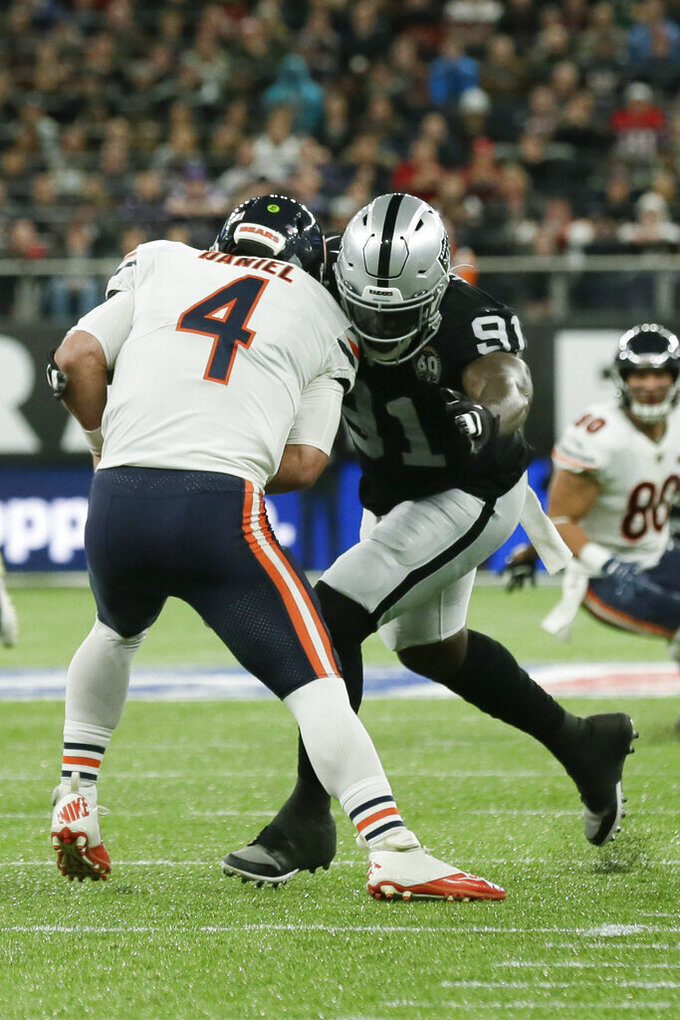 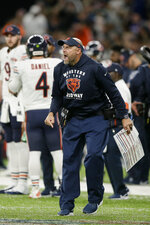 LONDON (AP) — It was only a matter of time for the vaunted Chicago defense to have a rough week.

The problem for the Bears right now is that when the Monsters of the Midway aren't dominating as usual, the offense isn't nearly good enough to make up for it and lead the team to a win.

With a combination of a defense that got overwhelmed at the line of scrimmage and an offense that struggled to move the ball consistently behind backup quarterback Chase Daniel, the Bears lost 24-21 to the Oakland Raiders on Sunday night in London.

"It's inevitable that a defense that we've had the first four weeks of the season, there's going to be a time when there's going to be a little struggle," coach Matt Nagy said Monday before the team headed back home for a week off. "Yesterday happened to be that. That's credit to Oakland. But when is the offense going to step up and take over for that? That's what we're trying to get to where we're more balanced."

That time sure wasn't Sunday when the Bears were held to 44 yards in a sluggish first half, a season-low 236 for the game, and managed to gain more than 31 yards on two of 11 drives.

Making matters worse was an uncharacteristic performance by a defense that hadn't allowed more than 17 points in nine straight games, including last season's playoffs. Oakland's physical offensive line cleared the way for 169 yards rushing and the Bears managed no sacks and only one quarterback hit.

The third quarter. The Bears played one good quarter against the Raiders, erasing a 17-0 halftime deficit by scoring three touchdowns in the third quarter. The offense benefited from two short fields, taking over on the 14 after a botched pitch by Oakland and the 16 after a 71-yard punt return to Tarik Cohen. Chicago turned those two chances into TDs and also had an 89-yard drive for a score as Daniel threw two TD passes and the defense allowed only two first downs.

Offensive line. A unit that was expected to be a strength for Chicago has been a major weakness so far. The Bears have struggled to run the ball through five weeks, topping 100 yards just once. This past game was the worst for the Bears as they were held to 42 yards on 17 carries with a long run of 6 yards. Pass blocking wasn't much better as a defense that had no sacks the previous two weeks came up with four.

WR Allen Robinson. The one bright spot on offense was the play of Robinson, who is looking like a legitimate No. 1 receiver in his second season in Chicago. He had seven catches for 97 yards and two TDs against the Raiders. His best play might have been a toe-tapping sideline 32-yard catch on third-and-8 from the 3 early in the fourth quarter.

Daniel. After stepping in and playing well last week when starter Mitchell Trubisky went down with a left shoulder injury on the opening drive, Daniel regressed against the Raiders. He threw an interception early in the second quarter that set up the TD that put Oakland up 14-0. He had another potential interception negated by a questionable roughing-the-passer penalty in the fourth. He then spoiled a late comeback attempt when he didn't see cornerback Gareon Conley drop back deep and threw an interception with the Bears in Raiders' territory with 1:14 remaining in the game.

DT Akiem Hicks left after eight plays with an elbow injury and didn't return. Nagy had no update on the severity of the injury. ... Nagy said QB Mitchell Trubisky will spend the bye week rehabbing his injured left shoulder at the facility and has a chance to be back when the team returns. ... DT Bilal Nichols is close to returning from a broken hand.

169 — The Bears came into the game with the league's third-ranked rushing defense at 61.5 yards allowed per game. Chicago allowed 169 against Josh Jacobs and the Raiders for its worst performance since giving up 176 to eventual Super Bowl champion Philadelphia on Nov. 26, 2017.

The Bears get a week off before returning on Oct. 20 to host the New Orleans Saints.