Bears RB Montgomery back in the lineup against the Steelers 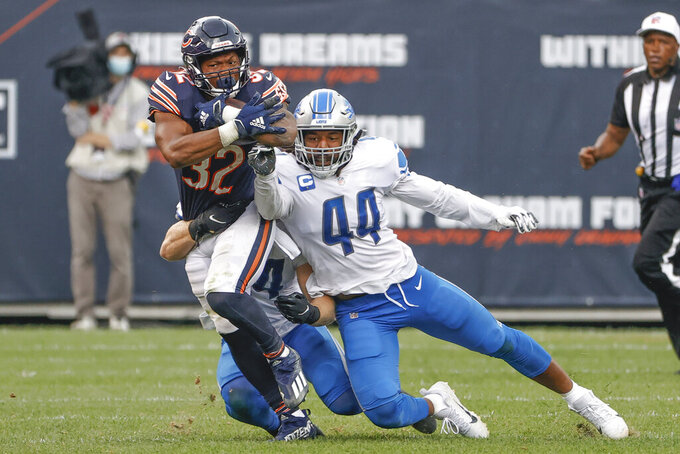 FILE - Chicago Bears running back David Montgomery (32) is tackled by Detroit Lions middle linebacker Alex Anzalone, back, and linebacker Jalen Reeves-Maybin (44) during the first half of an NFL football game, Sunday, Oct. 3, 2021, in Chicago. The Chicago Bears will once again be without star linebacker Khalil Mack, though they might have running back David Montgomery available when they visit the Pittsburgh Steelers on Monday night Nov. 8, 2021. (AP Photo/Kamil Krzaczynski, File)

PITTSBURGH (AP) — Chicago Bears running back David Montgomery will return to the lineup for Monday night's game against Pittsburgh.

The Bears activated Montgomery off injured reserve hours before kickoff. Montgomery hasn't played since suffering a knee injury in a victory over Detroit on Oct. 3.

Montgomery was Chicago's leading rusher at the time of the injury. The third-year pro has run for 309 yards and three touchdowns in four games this season.

The Bears also promoted linebackers Cassius Marsh and Sam Kamara from the practice squad with star outside linebacker Khalil Mack inactive for a second straight game because of a foot injury.

The Steelers will be without tight end Eric Ebron, who is inactive for a second straight week while nursing a hamstring injury. Pittsburgh promoted tight end Kevin Rader to fill Ebron's spot behind starter Pat Freiermuth.