For Bears, Vikings, 'a game in the NFL is never meaningless' 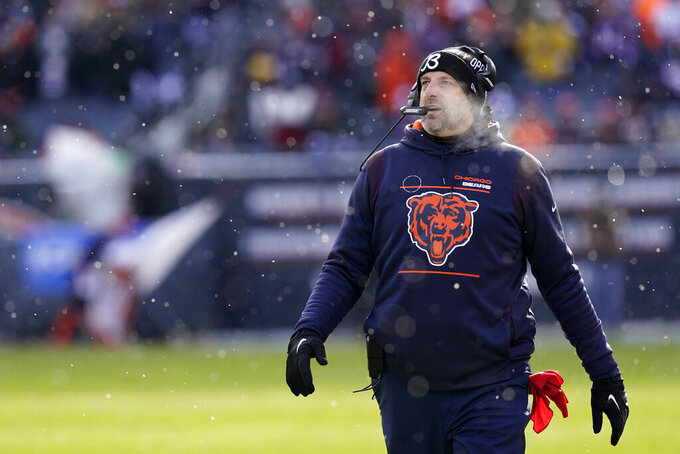 Chicago Bears head coach Matt Nagy exhales in the cold air as he walks the sideline during the first half of an NFL football game against the New York Giants Sunday, Jan. 2, 2022, in Chicago. (AP Photo/Nam Y. Huh) 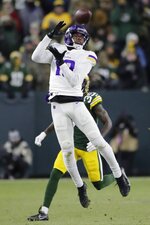 MINNEAPOLIS (AP) — Dalvin Cook practically leaped out of his seat when asked during his interview session about the motivation for a game without playoff stakes, lifting up the side of his shirt to reveal a large tattoo of his late father's likeness.

“That's one of my reasons. Every time, I'm going to compete. That's how he raised me,” said the Minnesota Vikings running back, whose father, James Cook, died of complications from diabetes near the end of the 2020 season.

The Vikings (7-9) were eliminated from contention with last week's loss at Green Bay. They will finish the schedule against the Chicago Bears (6-10), who were essentially out of it by mid-November and mathematically dismissed from the race by losing at home to Minnesota on Dec. 20.

In a sport that stokes an insatiable obsession over winning the Super Bowl, rare games like this on the schedule that carry no meaning for playoff qualification or seeding can be a bore for fans — just a notch above the preseason.

“Games we want back, we can’t go get them back, so now we have to go out here and compete and have some pride about ourselves,” Cook said. “A game in the NFL is never meaningless. It’s a tryout every time you go out.”

For all the sweat poured into intense offseason workouts and repetitive summer practices and all the time spent on film review and playbook implementation, a three-hour game will always carry a reward for the players who suit up.

“There’s just so much that goes into it. When you only get 17 guaranteed opportunities, you don’t ever take one for granted,” said Vikings quarterback Kirk Cousins, who has returned from a one-game absence due to COVID-19.

The coaches will surely feel that way, too, with both Matt Nagy and Mike Zimmer in danger of being dismissed. Zimmer is 71-56-1 in eight seasons and 2-3 in the playoffs, with only one of those wins in the last four years. Nagy is 34-30 in four seasons with the Bears and 0-2 in the playoffs.

“Is the record where we want it to be this year? No. Absolutely not," Nagy said. “We understand that. There’s just a lot of developing that goes on, and it does take some time when these guys are younger and when you draft them and they become yours.”

Zimmer has been in no mood for reflection this week, but he pointed out again how easily the Vikings could have had a better record no matter their flaws. They had an NFL-high 14 games decided by one score, losing eight. They were 2-4 in the games with a margin of three points or less.

“You hit half of those and you are in the playoffs,” Zimmer said. “Every game comes down to it.”

This is the fifth time in six years at U.S. Bank Stadium that the Vikings have finished the season at home against the Bears. Both teams were also eliminated ahead of time in 2016. In 2019, the Bears were out and the Vikings were locked into their seed for the playoffs.

The Vikings won in 2017 to clinch a first-round bye, with the Bears already done. The highest stakes were in 2018, when the Vikings would have been a wild-card team with a win. The Bears beat them 24-10 despite having already clinched the NFC North.

The Bears were planning to start rookie Justin Fields at quarterback, but he landed on COVID-19 reserve on Thursday. Fields, who is 2-8 as the starter this season, missed the last two games with an ankle injury suffered Dec. 20 in the previous matchup against Minnesota.

Bears outside linebacker Robert Quinn broke Pro Football Hall of Fame member Richard Dent’s club record last week with his 18th sack of the season. That was also the 100th of his career. Quinn has had quite the bounce-back year at age 31, just one short of his career high for sacks that was set in 16 games in 2013 with the St. Louis Rams.

“I guess I can show people I still have a little bit left in the tank," Quinn said. "It’s cool being eight years from that year. It's humbling, but you have to get it first before I start talking about it.”

WONNUM? YOU GOT HIM

Second-year Vikings defensive end D.J. Wonnum had three of his six sacks in the first matchup with the Bears. He's tied for the team lead with Danielle Hunter, the two-time Pro Bowl pick he replaced in the starting lineup after a torn pectoral muscle ended Hunter's season after just seven games.

“D.J.’s had a good year. He’s had some on-the-job training, obviously, but he’s a very good athlete. We’ve been able to use him a lot of different ways. Sometimes he’s spying the quarterback, sometimes he’s a linebacker, sometimes he’s a defensive end," Zimmer said. “So I think he has a very bright future.”

Unless Wonnum can get four sacks Sunday, this will be the second straight season the Vikings did not have a player with 10 or more sacks after a streak of 12 consecutive seasons with one.