Best in the West Seahawks set to host East-leading Giants 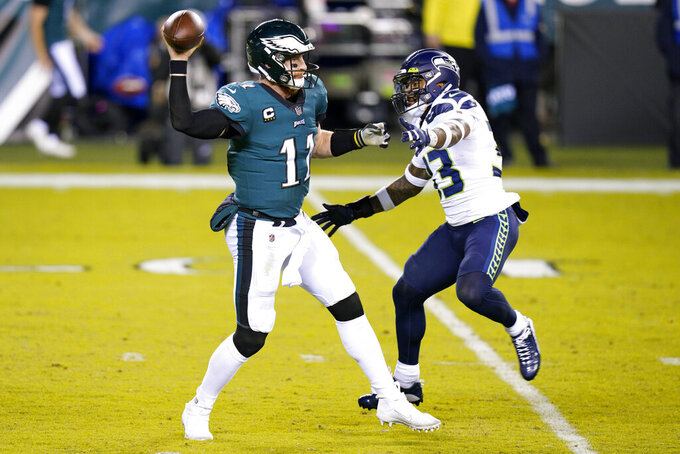 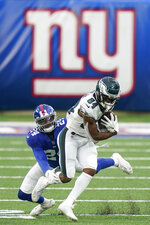 SEATTLE (AP) — If anyone can relate to the situation currently facing the New York Giants, it’s Pete Carroll.

A decade ago, Carroll was in his first season in Seattle. And for the entirety of that season, the NFC West was an ongoing punchline because of its futility that ended with the Seahawks winning the division title with a losing record.

It sounds awfully familiar to the NFC East this year, which the Giants currently lead at 4-7 heading into Sunday’s matchup against the NFC West-leading Seahawks.

“There were disparaging comments and people appalled at the thought that a team with a losing record would be in the playoffs, which I thought was hilarious at the time,” Carroll said. “But, you’re in your own division, you got to win your own division, and that means you got to have a better record than the rest of the guys in your division. Nobody said what the numbers had to be.”

The similarities don’t end simply with the expectation that whoever comes out of the NFC East will likely be the third team in the past decade to reach the playoffs with a losing record. Like Carroll in 2010, Joe Judge is in his first season, and has stabilized the Giants following their 0-5 start.

Going 4-2 over the past six games won’t be celebrated when the start to the year was so awful, but it is a sign of progress. Still, the Giants validity as a contender or perhaps the favorites for the division title would be boosted with a marquee victory whether against Seattle or in the coming weeks with Arizona, Cleveland and Baltimore on the schedule.

“To be honest, I don’t think we care too much about the outside opinion,” Giants linebacker Blake Martinez said. “For us in general, we want to go out there and show our own improvement and show ourselves that we can go and finish those types of games.”

Just like the Giants, the Seahawks (8-3) are in the middle of a race for a division title, albeit at the other end of the spectrum from the NFC East. Seattle moved back into first place in the NFC West last week after its win over Philadelphia, combined with the Los Angeles Rams losing.

But it’s a tenuous lead and having already fallen to the Rams last month, Seattle can’t afford any stumbles to remain in the conversation for the No. 1 seed in the NFC and a coveted playoff bye.

The biggest unknown is whether Giants QB Daniel Jones will be healthy enough to play after suffering a hamstring injury last week against the Bengals.

If Jones can’t go, Colt McCoy would make his first start of the season. McCoy attempted just 10 passes and threw for a meager 31 yards after stepping in for Jones last week. He started once last year for Washington and has one start in his career against Seattle, back in 2011 for Cleveland in a forgettable 6-3 victory.

James Bradberry has been the Giants’ shutdown cornerback all season and there is a chance he will travel with DK Metcalf on Sunday.

Metcalf has 58 catches for 1,039 yards and nine touchdowns. The Eagles had Darius Slay try to shut down the big receiver on Monday night and Metcalf spoiled the plan by having 10 catches for 177 yards.

Whoever is under center for the Giants, they’ll be looking at a Seattle pass rush that in the past five weeks has become among the best in the league. Seattle had six sacks last week against Philadelphia, giving the Seahawks 22 over the past five games.

The turnaround is dramatic from earlier in the season when the Seahawks could barely get any pressure on opposing QBs. The Seahawks had just nine sacks through the first six games, but the arrival of Carlos Dunlap, Jamal Adams returning from injury, and better overall coverage in the secondary have amplified the pass rush. Seattle is uncertain if Dunlap will be available this week due to a foot injury.

The Giants haven’t been great at protecting their quarterbacks, tied for fifth worst in the league with 31 sacks allowed.

Two of the better interior linebackers in the league will be on the field with Seattle’s Bobby Wagner and Martinez. Both are tied with 101 tackles on the season, two of seven defensive players league-wide to have topped the century mark through Week 12.

It’s the fourth straight season Martinez has topped 100 tackles, while Wagner has done it in nine straight seasons, becoming one of three linebackers to accomplish that feat since 2000.

By Dan Scifo 3 minutes ago
By Josh Dubow 6 hrs ago
By Dennis Waszak Jr. 6 hrs ago
By The Associated Press 8 hrs ago
By Stephen Whyno 16 hrs ago