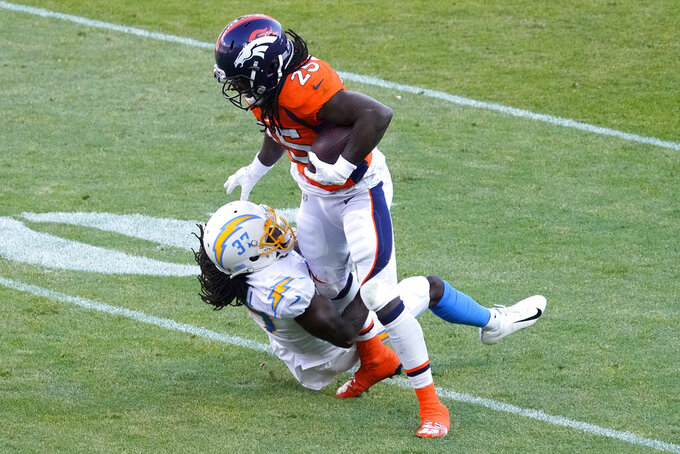 ENGLEWOOD, Colo. (AP) — A good ground game could do wonders for scuffling quarterback Drew Lock and his health but the Denver Broncos’ 1-2 punch of Melvin Gordon and Phillip Lindsay has been no haymaker in 2020.

When Gordon signed a two-year, $16 million deal in free agency, the Broncos were expecting the kind of performances Gordon had against the Jets on Oct. 1 when he ran for 107 yards and two touchdowns.

Since then, Gordon has missed one game with strep throat and averaged a middling 3.5 yards on 42 carries with just one more touchdown, none in November. He also has the threat of a three-game suspension hanging over him for a drunken driving arrest in October.

Lindsay’s turf toe injury in the opener sidelined him for three games and he returned with a workmanlike 101-yard day on 23 carries in a victory at New England when Gordon was sick.

Since then, he’s carried fewer than seven times a game even though he averaged 8.8 yards per run against the Chiefs and 13.8 yards per carry against the Chargers, when his 55-yard TD scamper triggered a second-half comeback from a 21-point deficit.

Lindsay, the only running back in NFL history to surpass 450 carries without a fumble, made it clear last week that he believed the run game could ignite the Broncos’ offense.

"You’re physical, you’re pushing it down the field, you’re punching them in the face," Lindsay said. "There’s only a handful or maybe one or two teams that can live off the pass 24/7. That’s just not how it is.”

Yet, Lindsay carried just four times for 2 yards in the Broncos’ blowout loss at Las Vegas, where the Raiders ran for 203 yards to Denver’s 66.

“We got behind, and you’re not going to get a lot of opportunities in the run game when you’re behind,” coach Vic Fangio said.

Lindsay, who had 1,000-yard seasons in each of his first two years, when he piled up 17 touchdowns, has averaged an impressive 5.5 yards per carry this season but he's rushed for just 312 yards and one score on 52 carries and he’s caught just two passes or 14 yards.

“I think it’s good if Phillip touches the ball and we’ll keep trying to get it to him,” embattled offensive coordinator Pat Shurmur said this week.

The Broncos, who are 19th in the league in rushing, have never led in losses to the Chiefs, Falcons and Raiders in the last month.

They’ve not only trailed but trailed big -- they were down 24-9 at the half against Kansas City, fell behind the Chargers 24-3 and watched the Falcons go up 27-6. Last week they trailed 10-6 at halftime in Las Vegas but surrendered 20 unanswered points to begin the second half.

After averaging 5.4 yards to go on third down in their opener against Tennessee, the Broncos’ average yards to gain on third down is a whopping 8.2, which is making Denver one-dimensional and putting Lock in harm's way. (He suffered bruised ribs and a strained oblique last Sunday).

“We’ve got to do more early in the game to keep it in a run-pass situation," Shurmur said. "I believe in running the football and I think it’s something that we need to do more and better.”

The Broncos (3-6) host the Miami Dolphins (6-3) this weekend. The Dolphins have set a franchise mark by scoring at least 17 first-half points in their five consecutive victories.

Notes: Lock was sore Friday morning after returning to practice the day before "but that’s to be expected because he hadn’t really done much since Sunday,” Fangio said. Later, Lock again looked good moving and throwing at practice. ... The Broncos announced this weekend's game will be the last this season with fans in the stands due to an increase in COVID-19 cases in Colorado. ... Three starters were added to the injury report and listed as questionable, including CB Bryce Callahan, who was sick and missed practice. RG Graham Glasgow (calf) and DL DeShawn Williams (ankle) were limited.