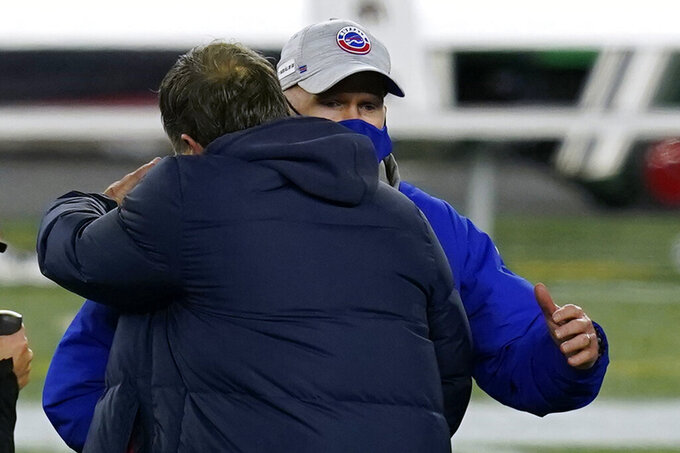 ORCHARD PARK, N.Y. (AP) — Don’t let the Buffalo Bills’ polite talk about how the Patriots were merely the next opponent on their schedule fool you.

For the team’s longest-serving players who have known mostly failure when facing New England, Buffalo’s 38-9 primetime beatdown of the Patriots on Monday, bore the resemblance of unfinished business in a season the Bills have established themselves as AFC contenders.

At 12-3, Buffalo has its most wins since 1993, and is in the driver’s seat to clinch the conference’s second playoff seed, needing only a win over Miami or a Pittsburgh Steelers loss on Sunday. Unable to fall further than third, coach Sean McDermott wouldn't reveal whether he plans to rest his starters to be fresh for the playoffs.

As for the Bills sweeping New England for the first time since 1999, McDermott wouldn’t go further than saying he was “humbled” upon being congratulated by Patriots coach Bill Belichick following the game.

Otherwise, McDermott said, it was but one win.

In the bigger picture, it was much more than that.

“I haven’t had this feeling in Foxborough ever,” said Hughes, who in six previous seasons in Buffalo was 2-12 against New England. “This was a nice feeling to come back here in this stadium and return a nice punch in the face. It felt good.”

After 20 years of playing patsy to the Patriots, and a week after ending New England’s NFL-record 11-year run as division champions, Buffalo punctuated its coming-out party by delivering Belichick his most lopsided home loss as the team’s coach.

The Bills took advantage of the injury and talent-depleted Patriots by being the more opportunistic and disciplined team. It began with Buffalo catching the Patriots off guard on a fake punt on its second possession which led to the Bills scoring touchdowns on four consecutive drives, not including a one-play kneel-down to end the first half.

Quarterback Josh Allen showed no signs of the hesitancy he displayed in eking out a 24-21 win over New England on Nov. 1, by instead exposing numerous holes in what had been a once-proud defense.

Allen finished 27 of 36 for 320 yards and four touchdowns, three of them to Stefon Diggs, and watched much of the fourth quarter from the sideline with the game in hand.

And yet, the Bills have suddenly developed a swagger during a five-game win streak — their longest since a six-game stretch in 2004 — in which they’ve outscored opponents by a combined margin of 173-84.

Such brash talk would have been unheard of four years ago, when Buffalo was in the midst of a 17-year playoff drought, which stood as the longest stretch among North America’s four major pro sports.

Buffalo still has much to prove in having not won a playoff game since December 1995, which happened to be the last time the Bills won the AFC East.

For now, they’ll settle on enjoying the moment.

“I’ve played a lot of football in my 11 years,” Hughes said. “This is probably the most fun I’ve had.”

The Allen-to-Diggs connection. After managing one catch on three targets for 2 yards through Buffalo’s first three possessions, Diggs caught the next eight passes thrown his way for 143 yards. He extended his single-season team record of receptions to 120, and set the record with 1,459 yards receiving — 91 more than Eric Moulds in 1998.

A defense that allowed 145 yards rushing, the sixth time Buffalo has given up 140 or more this year.

TE Dawson Knox overcame a dropped pass in the end zone on the first play of the second quarter to finish with three catches for a season-high 51 yards.

LB Tremaine Edmunds whiffed in attempting an open-field tackle of Cam Newton in allowing the Patriots quarterback to score on a 9-yard run to cut Buffalo’s lead to 10-9 in the second quarter.

WR Cole Beasley is listed week to week after hurting his lower leg in the fourth quarter. ... S Jordan Poyer returned after being evaluated for a concussion.

Determining how much playing time Bills starters get in a season-ending outing against Miami, with the Dolphins needing a win to clinch a playoff berth.