Brady, Bucs drop under .500 with shocking loss to Panthers 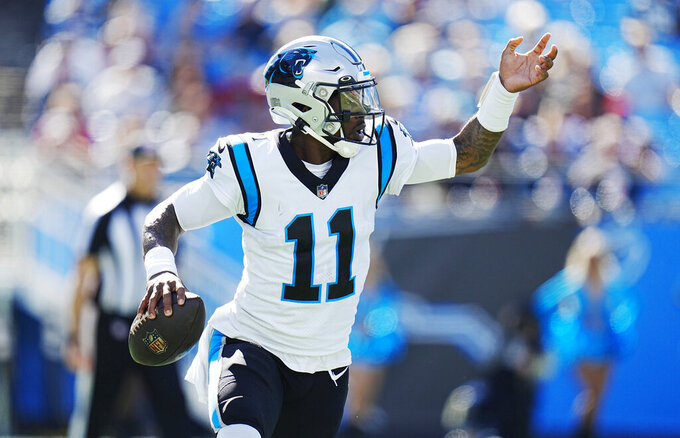 Carolina Panthers quarterback PJ Walker (11) scrambles to find a receiver during the second half of an NFL football game against the Tampa Bay Buccaneers Sunday, Oct. 23, 2022, in Charlotte, N.C. (AP Photo/Rusty Jones)

CHARLOTTE, N.C. (AP) — Tom Brady hasn't been in this position in two decades — a game under .500 this far into the NFL season.

Brady and the Tampa Bay Buccaneers lost for the third time in four games Sunday to fall to 3-4. It came in stunning fashion, a 21-3 defeat to the Carolina Panthers, a team that had lost 12 of 13 games and was playing with a third-string quarterback and under an interim head coach.

Brady was 32-of-49 passing for 290 yards. One of those incompletions came when a wide-open Mike Evans dropped what would have been a 64-yard touchdown on the third play of the game.

Brady hasn't had a losing record this far into a season since the 2002 New England Patriots dropped four straight games to fall to 3-4. Brady has never been under .500 after eight games.

“He’s like super competitive and I could see it in his eyes that he was (upset),” Panthers defensive end Brian Burns said. “It feels great to hold the GOAT to three points.”

Bucs coach Todd Bowles said his team has to “be grown men” and accept the loss and get better.

“We’re going to see how many people can handle adversity, and it’s about as dark as it’s going to be right now,” Bowles said.

The win gave the Panthers something to celebrate — finally.

They came in as 13 1/2-point underdogs, and many fans have already given up on them, as evidenced by thousands of empty seats at Bank of America Stadium. Earlier this week, management traded the team's best player, Christian McCaffrey, to San Francisco in a move that signaled to many that the Panthers were tanking in an effort to get the No. 1 pick next season and finally land a franchise quarterback.

“That definitely wasn't a team out there that was trying to tank it,” Panthers interim coach Steve Wilks said after his first win since taking over for Matt Rhule, who was fired on Oct. 10. “These guys right here have come together and they believe in one another. ... There is a lot that we can build on today.”

P.J. Walker threw for 177 yards and two touchdowns for Carolina (2-5) in place of injured Baker Mayfield and Sam Darnold. He's expected to start against next week at Atlanta, per Wilks.

But D’Onta Foreman ran for 118 yards, Chuba Hubbard added 63 yards and a touchdown and the Panthers managed 343 yards on offense. Suddenly, the Panthers are just one game behind the Bucs and Falcons for first place in the NFC South.

Walker believes the win can galvanize the Panthers.

“You could just feel the energy as we came into the building today, feel the vibe of us wanting to go out and there and play this game,” Walker said. “We talked in the meeting about making that jump. We did that today."

The Panthers led 7-0 at halftime behind a 20-yard TD pass from Walker to D.J. Moore. The Buccaneers couldn't get anything going in the first half after Evans juggled and then dropped the long pass from Brady when he was more than 10 yards behind the defender.

The Bucs never recovered on offense and were limited to 46 yards rushing.

Carolina pushed the lead 14-0 after Foreman's 60-yard run set up a 17-yard touchdown burst by Hubbard. Walker put the game away with a 29-yard TD pass to tight end Tommy Tremble in the right corner of the end zone with 9:33 left in the game.

Buccaneers: CBs Antoine Winfield (concussion) and Anthony Chesley (hamstring) left the game in the second half.

Panthers: Hubbard left the game in the fourth quarter with an ankle injury. CB C.J. Henderson left in the second half with an arm injury.