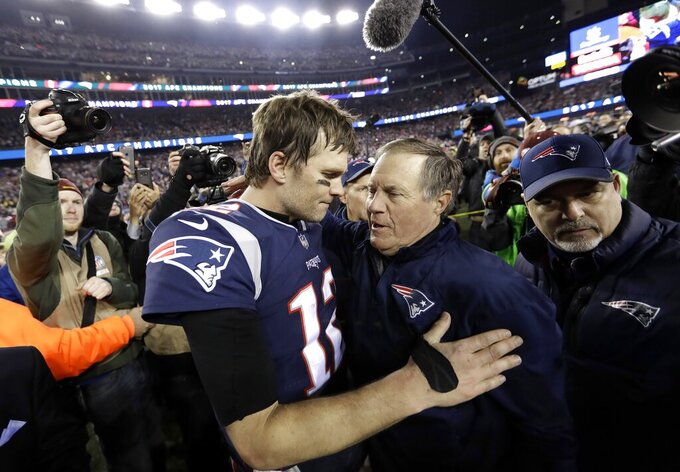 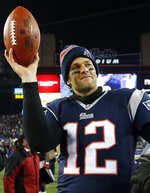 BOSTON (AP) — Over the past two decades, Tom Brady and Bill Belichick built the most successful player-coach partnership in NFL history, establishing the core of the Patriots’ championship culture.

Following Brady’s announcement Tuesday that he will leave New England in free agency, Belichick is left with replacing the most successful quarterback pro football has seen while also retooling a roster that already had several needs.

“I don’t know what my football future holds, but it is time for me to open a new stage for my life and my career,” Brady wrote in his Instagram post Tuesday.

The team he leaves behind must plot a new course into an unknown future, too. It's been pretty much two decades since that was true.

The Patriots dominated the AFC East during Brady’s tenure, winning the division 17 times, including a record 11 straight seasons, to go along with their six Lombardi Trophies.

But Brady was frustrated throughout 2019 as he tried to lead an offense that lacked consistency and a deep threat at receiver. He also struggled to get dependable production from the tight end position following the retirement of Rob Gronkowski.

“Nothing about the end of Tom’s Patriots career changes how unfathomably spectacular it was,” Belichick said in a statement Tuesday. “With his relentless competitiveness and longevity, he earned everyone’s adoration and will be celebrated forever. It has been a privilege to coach Tom Brady for 20 years.”

What's next for Belichick as he prepares for the official start of free agency on Wednesday with 2019 fourth-round pick Jarrett Stidham as his starting quarterback? That's hardly an ideal scenario.

Stidham impressed the coaching staff during the preseason but played only one series and threw just four passes during the regular season.

Brady was in his second season when he took over as starter in 2001 after Drew Bledsoe was injured. They won the Super Bowl that season.

The chances of the Patriots catching lightning in a bottle twice seem unlikely.

Stidham is one of several players New England has brought in as possible Brady successors. The list also has included Jacoby Brissett, now with the Colts, and 49ers starter Jimmy Garoppolo.

Drafted in 2014, Garoppolo seemed like Brady’s heir apparent until he was abruptly dealt to San Francisco in October 2017 for only a second-round draft pick. His departure came just a month after Brissett was traded.

At the time Belichick seemed to lament making the deal, saying he felt having Brady, Garoppolo and Brissett on the roster gave them “the best quarterback situation in the league.”

Three years later, Brissett is one of a handful of available veterans Belichick could target as Brady’s replacement.

Indianapolis will be adding free agent Philip Rivers. That increases the likelihood of the Colts dealing Brissett, who is about to enter the final season of the two-year deal he signed in 2019.

Another option is Cincinnati’s Andy Dalton, who earlier in his nine NFL seasons led the Bengals to the playoffs five times. The Bengals hold the top pick in the draft and almost certainly will use it on LSU’s Joe Burrow.

There are also two former Super Bowl MVPs who could be available.

Nick Foles had a forgettable first season in Jacksonville that included him getting benched late in the year for rookie Gardner Minshew. But Foles, who led the Eagles to the title in 2017, beating Brady and the Patriots in the Super Bowl, would be very costly under his four-year, $88 million deal.

The 2013 Super Bowl MVP with Baltimore, Joe Flacco, was 2-6 for the Broncos last season before having his season cut short by a neck injury. The Broncos are going with Drew Lock, meaning Flacco could welcome the chance for a fresh start.

But all veteran scenarios will require some salary cap creativity by the Patriots.

After franchising Joe Thuney, coming to terms on new deals with Matt Slater, Devin and Jason McCourty, and absorbing a $13.5 million cap hit from the signing bonus money Brady received in 2019, the Patriots will have only about $9 million in available cap space.