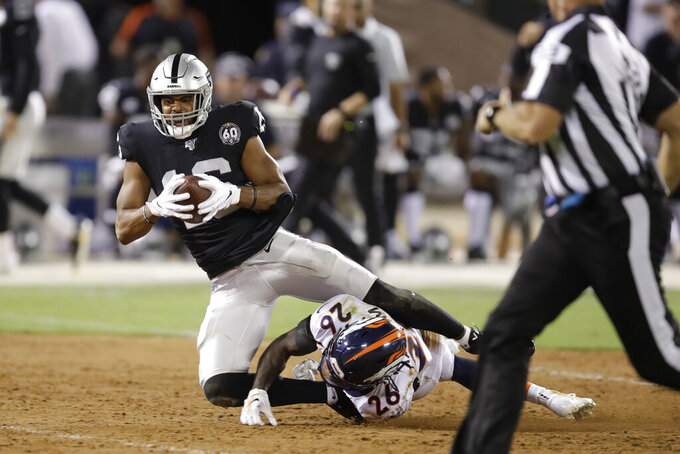 FILE - In this Sept. 9, 2019, file photo, Oakland Raiders wide receiver Tyrell Williams tumbles over Denver Broncos cornerback Isaac Yiadom (26) after making a reception during the first half of an NFL football game in Oakland, Calif. It will be the end of an era of sorts this weekend in Oakland. Not that anyone figures to be mourning what should be the final NFL game ever played on a field with infield dirt, especially the players who have had to deal with the bad footing, ripped jerseys, scraped arms and legs and hard falls onto a surface with no cushion.(AP Photo/Ben Margot, File)

ENGLEWOOD, Colo. (AP) — Broncos linebacker Todd Davis appears to have a better chance of playing against the Chicago Bears on Sunday than cornerback Bryce Callahan.

Both missed the opener and were listed as questionable for Week 2 after limited participation in practice Friday.

Coach Vic Fangio said Davis has improved every day since returning to practice Wednesday for the first time since tearing his left calf July 18.

Fangio wasn't as optimistic about Callahan's return from a sore left foot, the same one that he broke last December, ending his season with the Bears and requiring surgery.

"I do see him getting better," Fangio said. "We're just going to have to keep seeing some progress tomorrow and then even Sunday."

Callahan left the Broncos' stadium practice on July 27 after his left foot was stepped on and he missed most of training camp.

Recently re-signed Corey Nelson, who played on the Broncos' Super Bowl 50 team, filled in at inside linebacker and Isaac Yiadom at cornerback Sunday at Oakland, where the Broncos lost 24-16.

Callahan, who signed a three-year, $21 million deal with Denver in free agency, was hoping to get the same chance as his former Chicago teammate Adrian Amos, whose interception of Mitch Trubisky in the end zone sealed Green Bay's 10-3 win at Chicago last week.