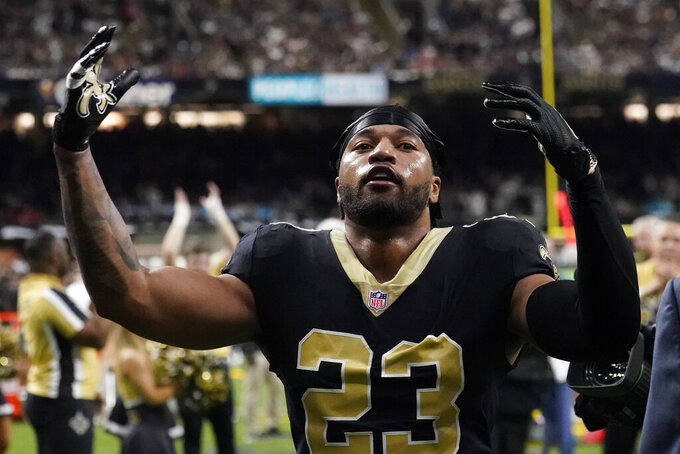 New Orleans Saints cornerback Marshon Lattimore reacts after being thrown out of the game after a brawl against the Tampa Bay Buccaneers during the second half of an NFL football game in New Orleans, Sunday, Sept. 18, 2022. (AP Photo/Gerald Herbert)

NEW ORLEANS (AP) — Buccaneers star receiver Mike Evans was in street clothes, in the shadow of a tunnel leading to the visitor's locker room in the Superdome, when Tom Brady trotted off the field and gave the star receiver a brief, supportive hug.

For the second time in his NFL career, Evans was ejected from a game in New Orleans for running in to level Saints star cornerback Marshon Lattimore during dead-ball scuffling involving other players.

This time, Evans' actions might have helped his team's cause more than they hurt.

Lattimore also was ejected — a decision that left a number of Saints players embittered.

“It was a cheap shot,” Saints running back Mark Ingram said of Evans' initial run at Lattimore, who'd been jawing with Brady and exchanging shoves with Bucs running back Leonard Fournette before the Bucs' 6-foot-5, 231-pound receiver came charging in from near the Bucs' sideline.

“For you to come in and blindside somebody, I mean, I don’t understand what you’re supposed to do?” Ingram continued. “If somebody comes and just cheap-shots you, nobody respects that. ... As a man, as a player, you’ve got to be able to defend yourself in some form.”

Lattimore did not speak with reporters after the game. Evans did, and said he thought he saw Lattimore throw a punch and felt compelled to defend his teammates.

“I wasn’t going to let that happen,” Evans said. “We got each others' back.”

Saints safety Marcus Maye then tried to grab Evans, only to have Evans slam him to the turf while both were engulfed by a swarm of players from both teams.

Officials conferred and elected to asses offsetting personal fouls on just Evans and Lattimore, and ejected both.

“There was someone who initially started the shove — and went out of their way to do so,” Saints defensive end Cameron Jordan said. “The refs are going try to get the guy who reacts. They rarely catch the guy who initiates. That’s just human error. That’s just human whatever-you-want-to-call-it. And when you lose a player like him, it definitely hurts.”

NFL rules allow officials to look at replays to review “the potential for other players to be disqualified,” Anderson said when asked about Fournette's involvement. "We just did not feel like those actions rose to the level of disqualification.”

Lattimore and Evans have carried on a personal rivalry since 2017, when Lattimore was the defensive rookie of the year. During a Saints victory in New Orleans that season, an altercation began along the Tampa Bay sideline when then-Bucs quarterback Jameis Winston pointed in Lattimore's face and told him to go back to his own bench area.

That's when Evans blindsided Lattimore with a running start, knocking Lattimore hard to the turf. Only Evans was ejected that time. He also was suspended a subsequent game.

Bucs coach Todd Bowles said he hoped Evans would not be suspended this time.

“We will see what happens with the league, but I haven’t seen the tape,” Bowles said. “It’s an emotional game. You don’t want punches thrown on either side and I’m sure their coach is saying the same thing. Things happen. We don’t need anyone thrown out of the ballgame.

“We try to be a disciplined ballclub, but every now and then the game gets emotional and out of hand,” Bowles added. “We will make our corrections and move forward.”