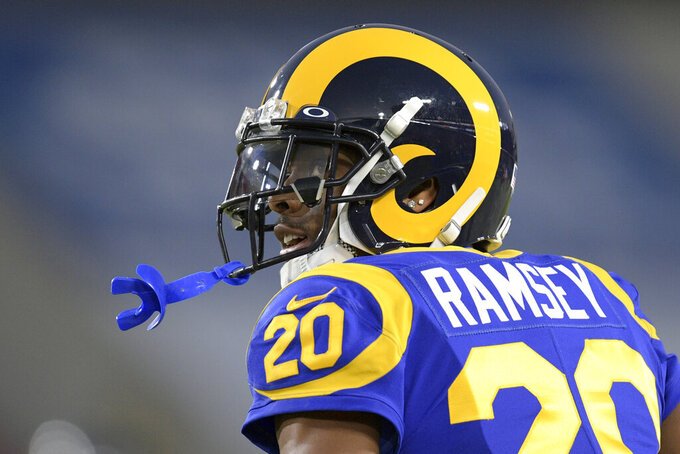 FILE - In this Dec. 8, 2019, file photo, Los Angeles Rams cornerback Jalen Ramsey watches during an NFL football game against the Seattle Seahawks in Los Angeles. Ramsey remains confident he will sign a new contract with the Rams as he heads into the final season of his rookie deal. (AP Photo/Kyusung Gong, File)

LOS ANGELES (AP) — When Jalen Ramsey's agent finalizes the Pro Bowl cornerback's new contract with the Los Angeles Rams, Ramsey insists it will be news to him.

That's right, the player who showed up to the Jacksonville Jaguars' training camp just one year ago in an armored bank truck says he isn't paying attention to the financial details of the negotiations between the Rams' front office and his agent, David Mulugheta.

That didn't stop Ramsey from abruptly leaving his first Zoom call of training camp Tuesday when reporters mildly pressed him on his thoughts about the pending deal that's likely to make him the NFL's highest-paid defensive back.

Ramsey was away from the camera for about two minutes before the Rams' public relations staff persuaded him to return. When he did, Ramsey confirmed his confidence in both sides to keep him in Los Angeles with a long-term deal.

That time seems to be arriving shortly. The four players picked before Ramsey in the 2016 draft — Jared Goff, Carson Wentz, Joey Bosa and Ezekiel Elliott — have all inked lavish new contracts.

Ramsey said his confidence is founded in his uniformly positive experience so far with the Rams, who acquired him from the Jags last October with full knowledge of his likely price tag for the 2021 season and beyond. Ramsey reported to training camp last week along with the rest of his teammates, declining to hold out as he enters the final season of his rookie deal.

Ramsey also knows the Rams have a strong recent history of paying top dollar for their elite players. Los Angeles handed out the largest contracts ever given at the time to a quarterback (Goff), a running back (Todd Gurley) and a defensive player (Aaron Donald).

General manager Les Snead declined to give many details earlier this week about the Rams' negotiations with Ramsey, but the executive said he is close with Mulugheta.

“We have that healthy relationship,” Snead said. “We’ve had dialogue with him, obviously, since the middle of the 2019 season when we made the trade.”

Zoom misadventures aside, the calm around the relationship between Ramsey and the Rams stands in sharp contrast to the reputation he acquired in Jacksonville, where he pulled away from the Jaguars last season amid his growing desire for a trade.

Subsequent revelations about the Jags' team culture under top executive Tom Coughlin suggested Ramsey might not have been the problem in Jacksonville, and the cornerback has made the most of his fresh start on the West Coast.

Ramsey also will take on a new role on the Rams' defense this season under new coordinator Brandon Staley. Rather than locking down every opponent's top receiver — which frequently meant Ramsey was nowhere near the ball on many plays because quarterbacks wouldn't even risk throwing toward him — Ramsey will get multiple assignments across the field, at times filling roles normally given to a safety or even a linebacker.

The details of those assignments won't be clear until the Rams play their first game in Staley's defense Sept. 13 against Dallas in brand-new SoFi Stadium. But Ramsey is excited about the opportunity for growth and learning, even in his fifth NFL season.

“I don't really have an exact role in the defense,” Ramsey said. “I'll be doing a bunch of different things. There's not really somebody I can talk to ... because nobody has done what I've been asked to do, or what I'm going to try to do in this defense. I'm going to take this journey kind of by myself and with my teammates and with my coaches, and see where I can take it.”