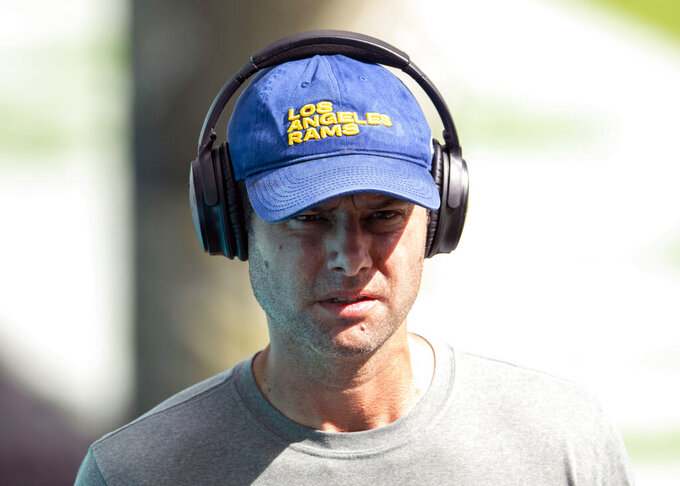 On Thursday, right before he was formally introduced as the 17th head coach in franchise history, Staley and his family video chatted with Herbert.

“You have to earn the players' trust and there’s not a bigger person whose trust we need to earn than Justin's,” Staley said.

The 38-year old Staley becomes a head coach after one season as the Los Angeles Rams defensive coordinator and only four years as an NFL assistant. He also fills what was considered by many to be the most attractive of the seven head coaching openings this offseason. There is plenty of talent on both sides of the ball, including Herbert, who is favored to win AP Offensive Rookie of the Year honors.

Staley replaces Anthony Lynn, who was fired on Jan. 4, two years after the Chargers reached the AFC's divisional round. Los Angeles posted two straight losing years, including 7-9 this past season.

It is also not lost on Staley that his rapid rise from being a defensive coordinator at Division III John Carroll to leading an NFL franchise in five years is a surprise.

“It doesn’t make sense to a lot of people. I know that, but every day that I was coaching at John Carroll, James Madison, Hutchinson Junior College, I was envisioning going against Tom Brady or Aaron Rodgers or Russell Wilson," he said. “I was studying the NFL and trying to become as as good as I could be to compete in this league, because that was always a dream of mine, and I think that those experiences have uniquely shaped me.”

General manager Tom Telesco said that even though Staley might be lighter compared to others in NFL experience, his strength in other areas more than made up for it. Even though Staley has coached defense for 15 years, including 11 in college, he did play quarterback at the University of Dayton.

Telesco also said the one quality that stands out about Staley is his maturity.

“There were no buzzwords, no platitudes. It was just very to the point. A lot of substance was answered, so that really stood out,” Telesco said. “You would also like to have a high level teacher and communicator. You’re seeing the communication part right now. You’ll see the teacher part more and when we get on the grass."

Telesco added that Staley's staff might include an assistant with head coaching experience to help in the transition.

When it comes to Staley's on-field vision, he is looking to create an offense that plays to Herbert's strengths. Herbert set a rookie record with 31 touchdown passes in 15 starts as well as having eight 300-yard games,

“We don't want to impose a system on him, but create one for him that uniquely shapes to his skill set because he is unlike anybody in the NFL, you know he’s his own person,” Staley said. “I think that my background as a player, my background as a defensive coach, I think that we’ll be able to shape that in a really special way. I was so excited to convey in the interview, and the specifics of that were a real highlight for me.”

Staley is also hoping to apply the same agility and flexibility to his defense. He said he will continue to call the defense despite being the head coach.

“I think that’s what I wanted to express in the interview is that we want to put people in conflict,” he said. "We want to use multiple groupings to take advantage of our players. We want to play with different tempos to put teams in a real bind. People talk about complimentary football, you know, that’s how you do it is you have offense, defense, and the kicking game as mirror images of one another.”

Telesco and Staley are hoping to fill the coaching staff within the next couple weeks. Staley was hoping to interview Rams offensive coordinator/quarterbacks coach Kevin O’Connell, but the request was blocked because it is considered a lateral move. Pep Hamilton was the Chargers quarterbacks coach this past season and has been in the running for offensive coordinator openings throughout the league.