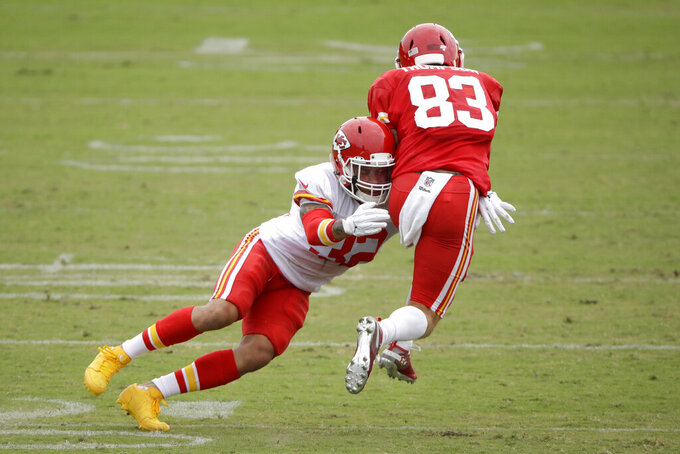 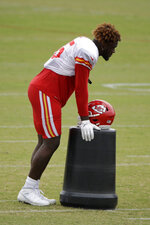 ST. JOSEPH, Mo. (AP) — The back stories of safety Tyrann Mathieu and defensive end Frank Clark are remarkably similar, starting with their rocky rides through college and right into their NFL stardom.

So it makes sense that the Kansas City Chiefs are counting on both of them to provide not only playmaking but also leadership for a defense that has undergone a top-to-bottom transformation.

The Chiefs signed Mathieu in March to a $42 million, three-year contract to replace the oft-injured Eric Berry at the back end of new defensive coordinator Steve Spagnuolo's 4-3 scheme. Then in April, the Chiefs acquired Clark from Seattle and lavished on him a $105 million, five-year deal.

Big money for what the Chiefs hope is a big payoff.

Make no mistake: Mathieu and Clark both have razor-sharp edges.

Mathieu's can be traced to Aug. 10, 2012, when then-LSU coach Les Miles announced that the star safety would be dismissed from the program for a violation of team rules. Mathieu was coming off one of the best seasons in school history, one that earned him the Bednarik Award as the best defensive player in the nation and made him a finalist for the Heisman Trophy.

Mathieu, who still cannot shake the nickname "the Honey Badger," eventually entered a drug rehab program, then declared for the NFL draft. He wound up going in the third round to the Cardinals, even though his game-changing ability a year earlier would have made him a first-round pick.

Not only did he stay out of trouble, he used that chip on his shoulder to thrive in Arizona.

Despite missing time after tearing ligaments in his knee, Mathieu put up such solid numbers that the Cardinals gave him $62.5 million, five-year extension. But major changes within the organization led it to ask Mathieu to take a pay cut, and he was released when he ultimately refused.

Consider that another chip on his shoulder.

After making 89 tackles, three sacks and a pair of interceptions in a prove-it year with Houston, the Chiefs made Mathieu one of their offseason priorities as they attempted to shore up a defense that held back one of the NFL's best offenses a year ago — and may have cost them a Super Bowl trip.

"A lot of people put a lot of pressure on us," Mathieu said, "whether it be ourselves or outside noise. It's the same game we've been playing since we were 5 years old, so just go out there and really have some fun, have some swagger, and you know, just have some juice."

Clark certainly plays with that kind of juice, owed in part to his own college transgressions.

The defensive end had blossomed into an All-Big 10 star at Michigan over his first three seasons, and appeared poised for a big senior year. But on Nov. 16, 2014, he was arrested on suspicion of domestic violence and ultimately kicked out of the Wolverines' program.

Clark soon declared for the draft and went in the second round to Seattle, where he became a key part of the "Legion of Boom" defense. And like Mathieu, he largely stayed out of trouble — a Twitter spat with a reporter has been his biggest indiscretion — and put up such impressive numbers that the Seahawks placed the franchise tag on him after he racked up 13 sacks last season.

That's when the Chiefs engineered a trade and signed Clark to a massive extension.

"'Fun' is a good word. He likes to have fun," Spagnuolo said. "The guys that are securely confident in their abilities and in what they're doing, they go out and have fun. I just embraced them just a little bit ago because they battled, the O-Line and D-Line today, and it gets a little contentious. But at the end of coach (Andy) Reid's huddle, Frank went over and was tapping all of the offensive linemen. That's a team player right there. That'll make us better as a football team."

Mathieu and Clark both intend to make Kansas City better as a football team.

Along with a new coordinator and new system, the Chiefs' defense could have as many as eight new starters this season. And with that massive turnover comes a crucial need for leaders.

"The Honey Badger jumps out at you as being one. I think that will continue to grow. Frank is another one," Reid said. "We have other guys that are pretty good leaders, too. But I'd probably tell you that those are more of the bigger personalities."