Chiefs do about-face after Colts letdown in blowout of Bucs 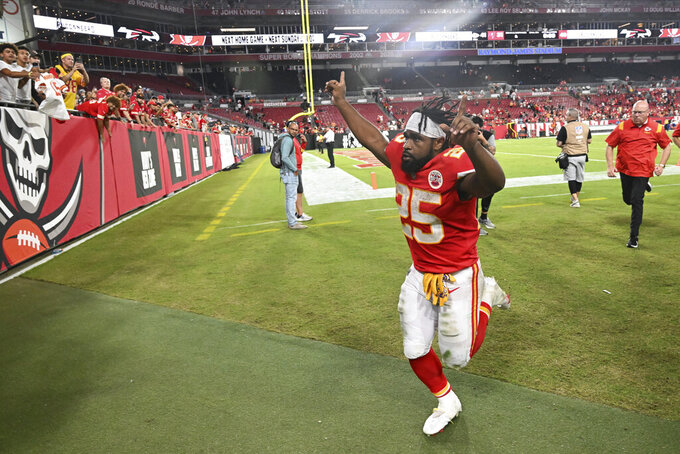 KANSAS CITY, Mo. (AP) — One week after Kansas City could do little right in a loss to the Indianapolis Colts, Patrick Mahomes and the Chiefs could seemingly do no wrong in a 41-31 blowout of the Tampa Bay Buccaneers on Sunday night.

On offense, Mahomes conjured more improvisational magic in throwing for 249 yards and three touchdowns, including a did-you-see-that jump pass to Clyde Edwards-Helaire during a big first half.

And on the ground, Edwards-Helaire and Isiah Pacheco sliced through one of the league's best run defenses to the tune of 189 yards and two more TDs.

On defense, the Chiefs held Leonard Fournette — who dominated them in a Super Bowl triumph in Raymond James Stadium less than two years ago — and the rest of the Tampa Bay running attack to 3 yards total.

“Listen, we stunk it up last week. We all knew that. We admitted it to you. We didn’t play the way we should play," Chiefs coach Andy Reid said.

“The guys cleaned it up, which is important. If this becomes an ongoing issue, then you’re not going to win a lot of games. So, it was important that the guys put their foot down and did what they did.”

Even the special teams were vastly improved from the previous week, when a fumbled punt return, missed field goal, missed extra point and a series of lousy kickoff returns conspired against Kansas City in what became a 20-17 loss to the Colts.

The biggest play on Sunday night came on the opening kickoff, when the coverage team stripped the ball from Buccaneers returner Rachaad White and recovered the fumble.

The Chiefs needed just two plays for Mahomes to find Travis Kelce in the end zone, effectively giving the Chiefs — who were due to get the kickoff to start the second half — a 7-0 head-start in the game.

It was more than that, though.

New fill-in kicker Matthew Wright hit both of his field goals and all five of his PATs while the Chiefs gave Harrison Butker another week to rest his sprained ankle. Pacheco averaged more than 30 yards on three kickoff returns. And punt returner Skyy Moore picked up 12 yards while cleanly fielding his opportunities.

“We didn’t play our best football last week. And in this league if you don’t play good, you’re going to lose,” said Mahomes, who also had 34 yards scrambling. "That's a good football team. To come to their house and find a way to score some points and find a way to win, I mean it gets you — hopefully — gets you kickstarted into the rest of this year.”

The Chiefs have been nearly unbeatable under Reid when they run for at least 100 yards, and they had that by halftime in Tampa Bay.

Edwards-Helaire carried 19 times for 92 yards and a score while Pacheco, a seventh-round pick who has been a big bright spot, carried 11 times for 63 yards and was rarely brought down on first contact.

Tom Brady was forced to throw a lot as the Buccaneers played catch-up, and he finished with 385 yards and three scores without an interception against the Kansas City secondary.

It would help the Chiefs pass defense to get back first-round pick Trent McDuffie, who is eligible to return from injured reserve from his hamstring injury in Week 6 against Buffalo, and linebacker Willie Gay Jr., who served the second game of his four-game suspension on Sunday.

Defensive back L’Jarius Sneed, the fourth-round pick in the 2020 draft, continued to show that he deserves some Pro Bowl consideration. Not only did he lead the Chiefs in tackles, he also had a strip-sack of Brady on a cornerback blitz, and Kansas City scored six plays later to push its lead to 28-10.

Defensive end Frank Clark arrived at training camp slimmed down and with a fresh, positive attitude, yet none of that has produced results.

He never got close to Brady and finished with one tackle, giving him seven through four games.

Sneed came out of the game with a sore ankle and RG Trey Smith hurt his pectoral muscle, though Reid did not seem to think either was serious. There is also hope that Butker will return to kicking next week against Las Vegas.

67 — That's the number of games it took Mahomes to reach 20,000 yards passing for his career, breaking the record of 71 set by Matthew Stafford. Dan Marino needed 73 games and 74 for Aaron Rodgers and Kurt Warner.

The Chiefs get an extra day of rest before facing the Raiders at Arrowhead Stadium on Oct. 10. It will be only the second home game of the season for Kansas City, but the first of two straight with the Bills also on the horizon.