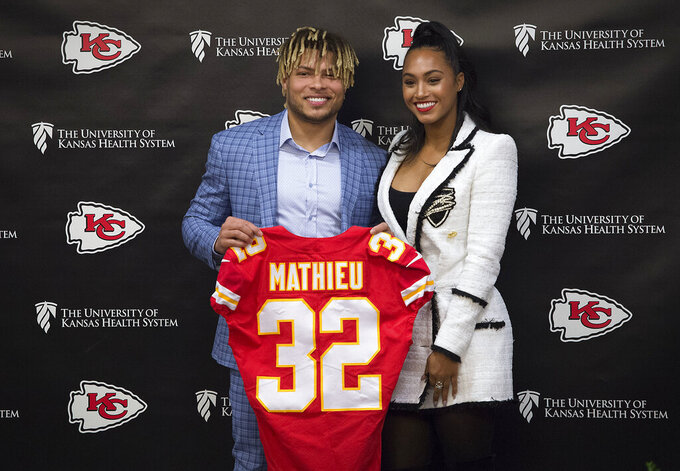 KANSAS CITY, Mo. (AP) — With a bright red hat perched jauntily on his mop-like hairdo, Tyrann Mathieu signed his contract with the Kansas City Chiefs and became the centerpiece of the offseason overhaul of their defense.

Hardly the only piece, though.

The Chiefs also signed former Cowboys linebacker Damien Wilson and agreed to terms with former Saints defensive end Alex Okafor on Thursday, adding three building blocks for their switch from a 3-4 system under Bob Sutton to a 4-3 alignment under new coordinator Steve Spagnuolo.

"I've always been a player that could do a lot of different things," said Mathieu, who signed a $42 million, three-year deal. "I just want to be on the football field. I want to be available, obviously stay healthy, and then help the young guys, help my teammates, help everybody be confident and make everybody feel like they're special."

The defense was another story.

It ranked near the bottom of the league in every meaningful statistical category last season, and its inability to improve down the stretch doomed the season. The Chiefs were unable to get off the field in overtime of the AFC title game against New England, and that meant Mahomes and the rest of the high-powered offense never got an opportunity with the ball.

It wasn't long until Sutton was fired, Spagnuolo was hired and the overhaul began.

Then, after they reached an agreement with Mathieu, they released three-time All-Pro safety Eric Berry in another cap-saving move. Berry had been one of their most popular players throughout his time in Kansas City, but injuries prevented him from playing all but three games the past two seasons.

"Certainly, all these guys could help us. It's the balancing act," Chiefs general manager Brett Veach said. "Just being real, the cap is an issue. So, you have to take that into consideration. You look at can they help us at the cost of what it would take to do that?"

The Chiefs hope to sign Hill and defensive tackle Chris Jones to extensions this offseason, and they have an opportunity to sign Mahomes to a long-term deal beginning next offseason.

"What can we do now to put ourselves in a good position not just for next year, but for the next three, four, five, six years?" Veach said. "So, you go back to where we'll be both in draft capital and cap space. I think this was a decision that when we got together, this put us in a really good position in regard to potential extensions coming up and put us in a position to maneuver around the draft."

Before the draft comes free agency, though, and the Chiefs have been busy.

Mathieu will headline a safety corps that includes veteran Daniel Sorensen, breakout star Jordan Lucas, and Armani Watts, who was coming along as a rookie before a season-ending injury.

Wilson signed a $5.6 million, two-year deal, a person familiar with the terms told The Associated Press, speaking on condition of anonymity because they were not disclosed. He joins a linebacker room that includes Reggie Ragland and former Cowboys teammate Anthony Hitchens.

Okafar agreed to an $18 million, three-year deal that could be worth up to $24 million, a person familiar with the terms told AP. He's coming off a two-year stint in New Orleans, and he started all 16 games while making 36 tackles and four sacks last season.

Most importantly, all of the signings fit Spagnuolo's defensive scheme.

"It's a new beginning for our defense," Chiefs coach Andy Reid said. "There will be changes as we go through this — this is the NFL, things happen. This isn't the end of new people coming in. That's not where we are at, whether it is the draft or free agency, but we know what we have."

They certainly know what they have in their new ball-hawking safety.

Veach said the Chiefs identified Mathieu as the top player on their free-agent board early in the process, enamored of his ability in coverage, on the blitz and in run support. He also showed during a prove-it year with Houston last season that he can remain healthy, and that gave the Chiefs confidence they could rely on him as the "quarterback of the defense."

"We all know what the offense can do. I think it'll be my job to come in here, try to get some direction, try to give some guys some motivation, some inspiration, and then be an everyday factor," he said. "Like I said, I'm going to try my best to do that every single day."