Close doesn't count for winless Dolphins; Bills are next 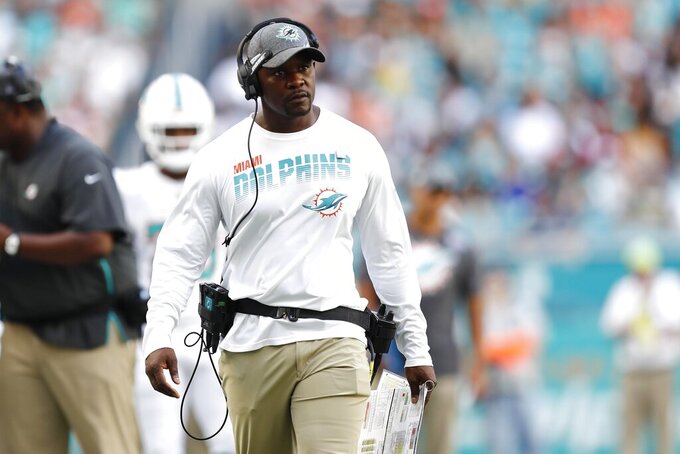 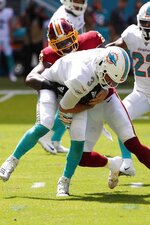 DAVIE, Fla. (AP) — Chart the Miami Dolphins' week-by-week point differential on a graph, and the trend suggests they'll win their next game and beat teams by 50 points in December.

Don't count on that.

The Dolphins (0-5) must play seven of their final 11 games on the road. They face one of their toughest challenges yet Sunday at AFC East rival Buffalo (4-1), a 16½-point favorite. And the quarterback situation is more muddled than ever, with journeyman backup Ryan Fitzpatrick's stock rising and Josh Rosen struggling to keep the starting job.

Miami has lost successive games by 49 points, 43, 25, 20 and 1. Even playing at home against a winless opponent couldn't get the Dolphins into the win column, losing Sunday to Washington, 17-16.

"These types of losses really sting, and they can linger," said Brian Flores, still without his first victory as a head coach. "The challenge now is for us to move on as quickly as possible."

Here are things to know about a team that finally came close but has held a lead for less than four minutes all season:

The Dolphins are now the clear favorites to make the No. 1 draft pick in April, which was perhaps their primary goal all along. Along with the Redskins, the Jets earned their first victory Sunday, leaving the Dolphins and Bengals as the NFL's only winless teams. The chance to draft Alabama quarterback Tua Tagovailoa could be at stake when Cincinnati plays at Miami on Dec. 22.

The Dolphins had a shot at beating the Redskins when they tried a two-point conversion with six seconds left, but the play looked like something drawn up by the Tanking for Tua committee. It was a screen pass and no one blocked, leaving intended receiver Kenyan Drake with four defenders between him and end zone.

No matter — he dropped Fitzpatrick's pass.

"We had a play we liked," Flores said. "We could have executed it better."

The Dolphins have had the same five starters in the offensive line in consecutive games only once this year, and the shuffling — along with lack of talent — showed again Sunday.

Josh Rosen was sacked four times in Miami's first 11 plays and often harried after that. He threw for just 85 yards with two interceptions before being benched at the start of the fourth quarter with the Dolphins trailing 17-3.

"We left a lot of plays out there just because of what we did as an offensive line early in the game," guard Evan Boehm said. "That is solely on us, and we have to get better."

Running back Mark Walton made his first NFL start and totaled 75 yards rushing and receiving.

Walton was drafted in the fourth round in 2018 by the Cincinnati Bengals, and they released him after he was arrested three times last offseason in his hometown of Miami. The Dolphins signed him in May, and he played 32 of their 76 offensive snaps against Washington.

"I'm blessed and grateful for the opportunity," Walton said. "I'm trying to go out and not make this bigger than what it is. I'm just doing my job."

Flores praised Fitzpatrick's performance in the comeback but said Rosen will start his fourth game in a row at Buffalo.

"You never want to pull a guy for one bad game," Flores said.

It wasn't an anomaly, however. Rosen ranks last among qualifying quarterbacks in passer rating, completion percentage and yards per attempt. Fitzpatrick will be on standby and on speed dial at Buffalo.

Flores said he's hopeful cornerback Xavien Howard will play at Buffalo after missing Sunday's game because of a sore knee. Center Daniel Kilgore missed the final play with an unspecified injury. Defensive end Avery Moss hurt his ankle and was in a walking boot after the game, and the injury might be season-ending.

42 — That's how many points the Dolphins have scored. Despite the sudden display of offense late Sunday, they're on pace for only 134 points, which would be the fewest by any team in a 16-game season.