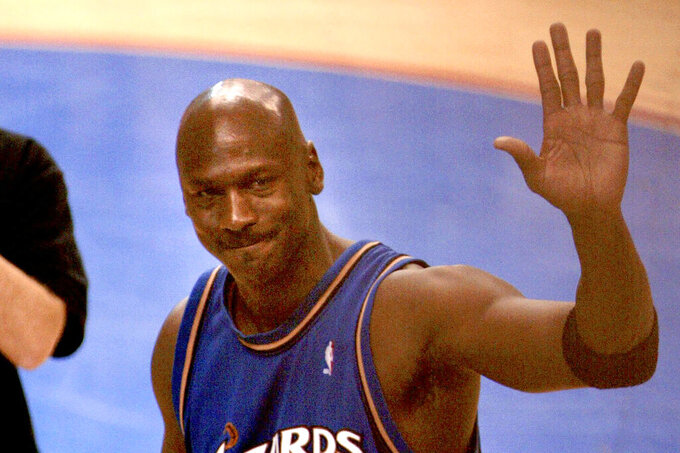 FILE - Washington Wizards' Michael Jordan waves as he walks off the court at the end of an NBA basketball game against the Philadelphia 76ers on April 16, 2003, in Philadelphia. It was Jordan's last NBA game. (AP Photo/Miles Kennedy, File) 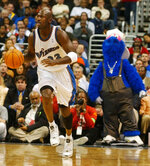 An athlete's decision to retire has long been a perplexing one, especially for those who've been at the top of the game.

The passion and relentlessness that pushes someone to succeed at the highest levels can make the real world feel so unfulfilling. Even if one does muster the fortitude to step away from the adulation and fame and wealth, the urge to return can be overwhelming.

Which brings us to Tom Brady.

Each week makes it more and more apparent that his stunning decision to return to the NFL after a 40-day retirement is one he'll come to regret.

The Tampa Bay Buccaneers dropped to 3-5 with a 27-22 loss to the Baltimore Ravens on Thursday night, the first time Brady has been two games under .500 since becoming the starting quarterback for the New England Patriots more than two decades ago.

“I don't think anyone feels good,” the 45-year-old said during a solemn news conference filled with clichés. “You can't erase what happened the last eight weeks. We've gotta dig deep, see what we're all about, come to work, try to improve, and give ourselves a better chance to win.”

If those words sound oh-so-familiar, it's because they've been uttered for generations by athletes who didn't want to accept the inevitable.

Time marches on, and you can't come along.

While there's still enough of the season to turn things around — the Bucs are only a half-game out of first place in the NFC South — it's not too soon to ponder if Brady is destined to join a list of the worst sports comebacks.

Here's a Top 10 of those who should've stayed away:

10. KATARINA WITT: The German figure skater was the epitome of elegance and charisma when winning back-to-back gold medals at the 1984 and '88 Winter Olympics. But her comeback at the 1994 Lillehammer Games resulted in a seventh-place finish, with Witt no longer able to match the athleticism of her much-younger competitors.

9. BILL JOHNSON: He became the first American man to win an Olympic gold medal in skiing at the 1984 Winter Games in Sarajevo, but injuries and a rebellious nature kept him from building on that stunning downhill run. More than a decade after he retired, Johnson tried to come back. A horrific crash on the course led to a debilitating brain injury from which he struggled to recover. He suffered a major stroke and died in 2016 at the age of 55.

8. DAVE COWENS. The Boston Celtics star retired in 1980 with two NBA championships, an MVP award and eight All-Star Game appearances. Two seasons later, the Hall of Famer felt the urge to play again. There was no room in Boston's frontcourt, so his rights were dealt to Milwaukee. Cowens spent one mediocre season with the Bucks and retired for good.

7. MARK SPITZ. The American swimmer became an Olympic icon when he won seven gold medals at the 1972 Munich Games. He jumped at the chance to return two decades later when reportedly offered $1 million if he could qualify for the Barcelona Olympics at age 42. Spitz didn't even make the cut for the U.S. trials, throwing up the white flag to a foe he couldn't beat. “I’m fighting something unavoidable and not exclusive to me,” he said at the time. "It’s called old age.″

6. MICHAEL SCHUMACHER. Perhaps the greatest driver in Formula One history, the German’s legacy was secure when he retired in 2006 after winning a then-record seven world championships (a mark since matched by Lewis Hamilton). Schumacher returned to the track in 2010 for a miserable three-year stint with Mercedes, failing to win a race and finishing 13th in the standings his final season.

5. BJORN BORG. We’re not sure what the Swedish tennis great was thinking when he grew out his blond locks, pulled a wooden racket from the closet and attempted a comeback in 1991 after nearly a decade away. It went about as well as could be expected: The 11-time major champion failed to win a single match.

4. GUY LAFLEUR. Lafleur retired in 1985 after a Hall of Fame career with the Montreal Canadiens. But the dashing winger wasn't done. Three years later, he came out of retirement for one season with the New York Rangers and two more with the Quebec Nordiques. About the only thing recognizable from his glory days was remaining one of the few players who didn't wear a helmet.

3. LANCE ARMSTRONG. The hubris of the seven-time Tour de France winner would not only result in an unfulfilling comeback, it also opened him up to further doping investigations that eventually caught up with him. Armstrong's schemes and a ruthless, win-at-all-costs mindset led him to be stripped of his tour titles and dumped by his sponsors. “Lance” has become a synonym for cheating — not exactly the way Armstrong wanted to ride off into the sunset.

2. MICHAEL JORDAN (COMEBACK, PART II). Jordan's first comeback — after a strange dalliance with minor league baseball — might be the greatest of them all. He won three more championships with the Chicago Bulls, and retired again in 1998 as the league's MVP. That should've been it, but MJ's competitive juices led him to another comeback in 2001, the yin to the yang of his first one. Plagued by injuries and advancing years, and looking totally out of place with the woeful Washington Wizards, Jordan failed to make the playoffs his final two seasons.

1. MUHAMMAD ALI. The saddest of all comebacks — in a sport that's filled with such debacles (see: Joe Louis, Ray Leonard and countless other boxers) — The Greatest returned to the ring in 1980 to face Larry Holmes for the heavyweight title. With his skills shot, the 38-year-old Ali spent 10 rounds serving as a punching bag for the quicker, stronger Holmes. Ali's trainer mercifully stopped it. Ali, who was later diagnosed with Parkinson's disease, died in 2016.

Paul Newberry is the national sports columnist for The Associated Press. Write to him at pnewberry(at)ap.org or at https://twitter.com/pnewberry1963