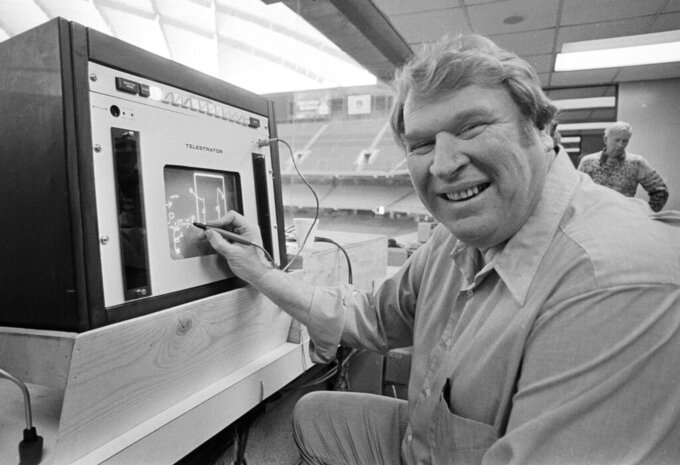 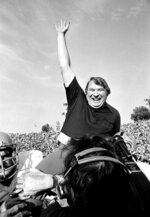 Somehow, he made every game feel fresh.

So it barely mattered whether you first ran across John Madden as the growling, grizzly bear-sized coach of the Oakland Raiders, the big, booming soundtrack of the NFL, or the guy with the “what-me-worry?” smile peeking out from the slot on a video-game console. All three generations of football fans faithfully followed in his wake because every run-in with Madden after that was bound to yield something new.

An insect landing on the camera lens in the middle of a game? Instead of ignoring that detail, Madden turned it into 10 seconds of broadcasting gold by ruminating on a bug's life. The pigeon that wouldn't leave the field after wrecking a pass play in a New York-Washington tilt? Madden did 10 seconds of play-by-play on that, too, wondering why the little guy hadn't settled on a seat with a real bird's eye view of the action.

He riffed about dogs, turkey legs and once he got his hands on a telestrator, did animated bits about Gatorade buckets being part of a family and Troy Aikman's inability to grow a beard. Madden never lost his delight in illuminating the thousand little dramas that took place at the edges of the TV camera's roving eye.

He even waited some 30 years to reveal what surprised him most about the crowning achievement of his time on the sidelines — the Raiders' 1976 Super Bowl championship.

“I was told it took five or six guys to lift me up,” Madden began the tale, "then they dropped me. ... But it was the happiest moment of my life."

Madden laid down the template for what would become one of the most influential careers the game has ever seen early in his tenure as a coach. Owner Al Davis had just handed over the reins of one of NFL's surliest franchises to the then-32-year-old assistant in 1969, and there were a half-dozen or more successful role models from which to choose — among them, Vince Lombardi, Tom Landry, Don Shula and George Allen, all of them with hard-earned reputations as disciplinarians.

Even then, Madden decided to go his own way.

The late Ken Stabler, the wild-eyed quarterback and leader of the Raiders' pack, remembered exactly two when he was interviewed in 2006. “Be on time and play hard. There were no dress codes, no haircut rules. Because he treated us that way, nobody abused it.”

The tributes pouring in since Madden's death Tuesday at age 85 focused on the “everyman” facet of his personality. Of course, not every man spends most of his adult life working within earshot of a microphone. And what came out of Madden's mouth at big moments in the biggest games sounded at times like spontaneous combustion — Boom! Whap! Boink! Oof! Bam!

But Madden made it a point to resonate with fans beyond the emotional level. He was a teacher throughout his life, trying to make an often overly complicated game understandable. His foray into video games was a fortuitous bit of timing, to be sure, but it was also an extension of Madden's ability to help others see the game through his eyes. When EA Sports began discussions about the first version of “Madden,” the real Madden got involved up to his elbows.

He insisted on life-like graphics, full 11-man sides and even shared his old playbook from his days as the Raiders coach. The crazy add-ons, from sound effects to players shrugging off injuries to complete heroic plays, were often his ideas, too, part of a commitment to make the game fun and accessible.

Ultimately, what most folks will remember about Madden largely reflects where in their own lives they first found him. Patriots coach Bill Belichick, as unsentimental a soul and cold-blooded professional as football has ever produced, was asked what he would recall. After offering condolences to the Madden family, he began, “John is just a tremendous person to be around. I think we all, probably, try to have a good professional career. John had about five.”

Belichick went on to laud him as a coach, a champion for scouting and supporting minority players, an advocate for player safety, a broadcaster and icon whose video game his own players still relished.

“Whatever was called for, he always seemed to have the right words, the right perspective, and did it in a way that was easy to understand, concise, and as I said, a lot times, humorous.”