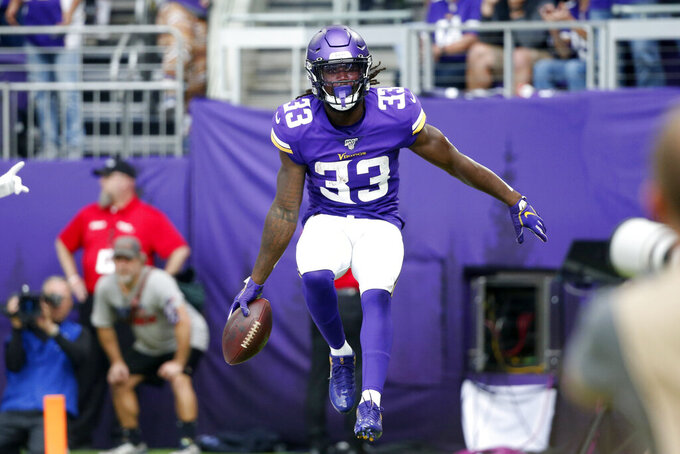 Minnesota Vikings running back Dalvin Cook (33) celebrates after a 19-yard touchdown run during the first half of an NFL football game against the Atlanta Falcons, Sunday, Sept. 8, 2019, in Minneapolis. (AP Photo/Bruce Kluckhohn)

EAGAN, Minn. (AP) — Having missing 19 of his first 34 games in the NFL with the Minnesota Vikings because of injuries, Dalvin Cook has barely scratched the surface of the impact he can make carrying the ball, and occasionally catching it.

After Cook returned from a hamstring problem that kept him out of five games last season, quarterback Kirk Cousins even good-naturedly nicknamed him the "White Tiger" in reference to the exotic animal zoo-goers often flock to see.

This year, Cook and the Vikings are counting on his regular presence. The opener sure was a strong start, with 21 attempts for 111 yards and two touchdowns in a 28-12 victory over the Atlanta Falcons.

"We need the 'White Tiger' to be there for 16 games, right? He's been special when he's had the football in his hands, and we've got to have him out there," Cousins said. "So it'll be key."

For all the salary cap space the Vikings have committed to Cousins and the standout wide receiver duo of Adam Thielen and Stefon Diggs, their third-year running back is just as indispensable for this offense.

Here's a closer look at what developed for the Vikings in Week 1:

Cook and backup Alexander Mattison had the most success off tackle and around the end, with right guard Josh Kline and tight end Kyle Rudolph among those who contributed key seal blocks to help extend the runs. Thielen's downfield effort was a big factor in Cook's first score.

For all the run blocking rewards the Vikings reaped against the Falcons, who finished just 25th in the league last season in rushing yards allowed, the small sample size of dropbacks by Cousins revealed some familiar vulnerability in pass protection. Cousins fumbled on his lone sack by Grady Jarrett, a ball recovered by center Garrett Bradbury, and he was hit hard on a safety blitz by Keanu Neal that was ruled an incompletion.

Zimmer praised the in-game communication with new special teams coordinator Marwan Maalouf, who called the right rush for Eric Wilson to race through the middle and block Matt Bosher's punt after the first possession for the Falcons.

The previous Vikings player to block a punt was Jasper Brinkley on Nov. 30, 2014, against Carolina. The Vikings actually had two in that game, the first by Thielen, and both of those were returned for touchdowns.

Furthermore, the coverage units prevented any long returns, Dan Bailey made all four extra point attempts and new punter Britton Colquitt averaged 49.4 yards on five tries. In the final minute of the first half from his 10, Colquitt boomed a 57-yarder to help keep the Falcons from scoring before the break.

This is nitpicking from a well-rounded performance, particularly given the four sacks and consistent pressure generated by the front seven, but the Vikings gave the Falcons first downs on three of four offside penalties. They totaled 11 flags for 100 yards.

Nickel cornerback Mackensie Alexander left the game with an elbow injury, and he was scheduled for an MRI on Monday. With Holton Hill suspended for the first eight games of the season and Mike Hughes not yet cleared from his rehab from a torn ACL last year, depth at the position will be at least a temporary concern. Safety Jayron Kearse took most of the turns in the slot in Alexander's absence. Hughes has "a chance" to play this weekend at Green Bay, Zimmer said.

172 — Net rushing yards for the Vikings. That's more than they produced in all but two of their games last season. The Vikings also had four runs of 15 or more yards in the first half. They had only 22 of those all year in 2018.

The pass protection will probably need to be better for the Vikings to prevail on the road against the Packers, who strengthened their defense in free agency and held Chicago to just three points in their opener.