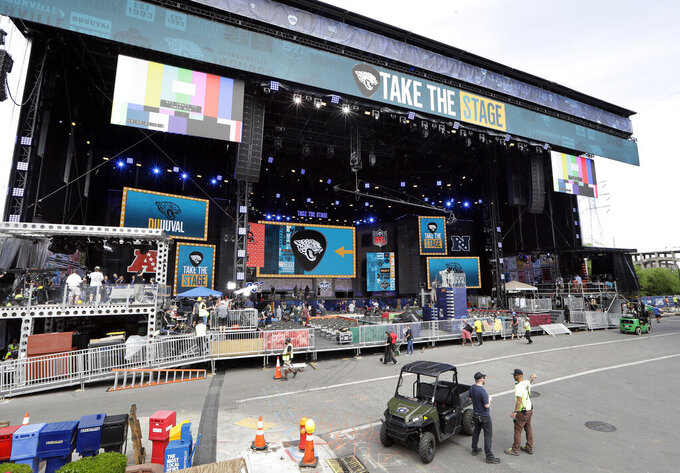 Work continues on the NFL Draft stage Tuesday, April 23, 2019, in Nashville, Tenn. The NFL Draft is scheduled to be held Thursday through Saturday. (AP Photo/Mark Humphrey)

George Grande had no idea what ESPN was about to create when he anchored the first telecast of the NFL draft in 1980.

"We didn't know who or how many people would be watching," Grande said. "For us it gave us a link to the NFL, it helped our coverage of college football and we had fun doing it."

ESPN's coverage that first year went eight-plus hours on a Tuesday with Grande on site from the ballroom of the New York Sheraton.

So much has changed since then. All three days of this year's draft, which begins Thursday, will be carried on ESPN, ABC and NFL Network and the event itself has become a traveling road show, with Nashville hosting this time.

Last year's coverage averaged 5.5 million viewers at any given time over the three days. The first round on ESPN, NFL Network and Fox averaged 11.2 million.

The growth of the draft can largely be credited to ESPN. Mel Kiper Jr., who has been a part of the network's coverage since 1984, has gone from working the first two rounds to being on set all three days.

"To see every pick televised and talked about nonstop is incredibly amazing," Kiper said. "I thought when I started it could be popular but not at the level it is right now. It's almost a national holiday."

Grande, who anchored ESPN's coverage from 1980 to 1985, said there is still a sense of accomplishment for those who worked that first draft. He will tune in on Thursday as ESPN will televise its 40th draft, sit back and smile.

"There is still pride and joy because we knew how much it meant to the network," he said.

A look at what the networks are planning for this year's draft:

ROBERTS RETURN: Robin Roberts was an integral part of ESPN's draft coverage before going to ABC's "Good Morning America." She will host ABC's first-round coverage, which will have a different approach than ESPN's.

"Your die-hard fans are still going to be serviced, but we are going to go beyond that," Roberts said. "We talk to Nick Bosa and following the family legacy. One player had a speech impediment. We have so many vignettes to show why this moment is important."

ESPN's "College GameDay" crew will also be part of the coverage for the first two days along with "American Idol" judge Luke Bryan and mentor Bobby Bones.

ABC will simulcast ESPN's coverage on Saturday for the second straight year.

Trey Wingo hosts all seven rounds for the third straight year and will be joined by Kiper, Todd McShay, Lewis Riddick and Booger McFarland.

Even with multiple networks airing the draft last year, ESPN still led the way during the first round with an average of 5.473 million viewers, according to Nielsen.

CENTER STAGE: Daniel Jeremiah is well known among league scouts and personnel people from his years with the Baltimore Ravens, Cleveland Browns and Philadelphia Eagles. He has been one of NFL Network's draft analysts since 2013 but has moved into the lead role this year after Mike Mayock became the general manager of the Oakland Raiders.

Jeremiah said his draft preparation hasn't changed compared to past years. The only difference is when he speaks.

"Mike was the guy. He would do his deal on draft day and we would fill in around it. Now instead of speaking second, I am speaking first," Jeremiah said. "What I can do is talk about the experience of being in the draft room and going a little bit behind the curtain of how they landed at a decision."

Jeremiah expanded his portfolio by doing radio for Los Angeles Chargers games last season. He didn't know how it would affect his draft preparation, but discovered it actually enhanced it.

"I got to study a different team every week, how they were built and their philosophy," he said. "I also got to talk to general managers and coaches at the stadium, which was tremendously valuable."

NFL Network has done on-site coverage of the draft since 2005. Rich Eisen will once again host the proceedings with Jeremiah, Kurt Warner and Stanford coach David Shaw on the main set Thursday. Fox college football analysts Joel Klatt and Charles Davis will join Eisen and Jeremiah the following two days.