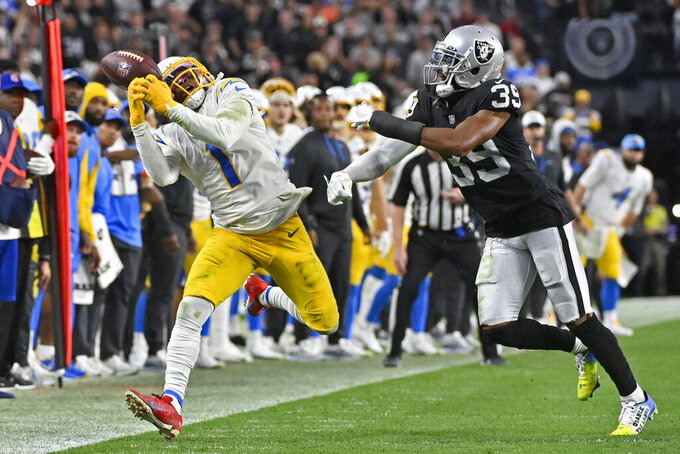 Los Angeles Chargers wide receiver DeAndre Carter (1) misses a pass on fourth down to turn the ball over on downs, as Las Vegas Raiders cornerback Nate Hobbs (39) covers, during the second half of an NFL football game, Sunday, Dec. 4, 2022, in Las Vegas. The Raiders won 27-20. (AP Photo/David Becker)

DOLPHINS PLAYER TO WATCH: DT Christian Wilkins is coming off a career-high 12-tackle game against San Francisco last week, and he has been key in Miami’s improving run defense throughout the season. Wilkins trails only Las Vegas’s Maxx Crosby for the most tackles by a defensive lineman (66) in 2022.

CHARGERS PLAYER TO WATCH: WR Keenan Allen missed much of the season because of a hamstring injury, but he has 16 receptions for 231 yards and two touchdowns in the past three games since returning. Allen paced the Los Angeles passing game with 88 yards and a touchdown on six grabs against Las Vegas, and QB Justin Herbert was definitely looking for him as 14 of 47 throws were intended for Allen.

KEY MATCHUP: Dolphins WR Tyreek Hill vs. the Chargers secondary. Hill should be ready to feast on a collection of defensive backs that were shredded by Las Vegas’ Davante Adams for 177 yards receiving and two touchdowns. Hill had seven scores in 11 games against Los Angeles when he played for Kansas City. Slot CB Bryce Callahan has three interceptions this season, but more production is needed on the outside. Michael Davis doesn’t have a pick this year, and Asante Samuel Jr. has one pass defensed in the past five games.

STATS AND STUFF: Sunday will mark the first time the Dolphins have been flexed into a Sunday night game since the NFL instituted flexible scheduling in 2006. ... The previous time Miami played two Sunday night games in the same season was in 2004. The previous time the Dolphins won two Sunday night games in the same season was in 2003. ... Miami beat Pittsburgh in a Sunday night game in Week 7. ... Quarterback Tua Tagovailoa was 0-for-5 on third down against San Francisco and finished with his lowest passer rating of the season (79.7), though he still leads the NFL in overall passer rating (112). ... Tagovailoa leads Pro Bowl fan voting with 138,390 votes, ahead of Minnesota’s Justin Jefferson and Kansas City’s Patrick Mahomes. ... Hill is fourth with 132,100 votes. ... Hill has four games with at least 10 catches and 150 yards receiving this season — tied with Tim Brown (1997), Calvin Johnson (2012), Jerry Rice (1995) and Antonio Brown (2017) for the most such games in a single season. But Hill has five games remaining. ... Miami ran the ball just eight times against San Francisco, which McDaniel said had a lot to do with the flow of the game. ... Chargers QB Justin Herbert set an NFL record with his 20th 300-yard passing game through his first three seasons. His 335 yards against the Raiders ended a run of eight straight games without hitting that mark. ... Los Angeles is playing on Sunday night for the third time this season after losing to San Francisco and Kansas City in consecutive weeks last month. ... James and LB Drue Tranquill each have 100 tackles through 12 games, the first set of teammates to do so in the past 30 seasons. … The Chargers have at least one interception or fumble recovery in nine straight games. They have 14 takeaways in that span. ... OLB Khalil Mack does not have a sack or tackle for loss in three games against the Dolphins. He has sacked 38 different quarterbacks in nine NFL seasons. ... Joshua Palmer leads the team with 612 yards receiving, one of five Los Angeles receivers with at least 450 yards this season. … The Chargers have the best defense in the league on third-and-short, allowing 14 conversions on 31 attempts of 2 yards to go or fewer.

FANTASY TIP: The potential return of Williams would cost Palmer his fantasy relevance as a WR3 with upside after some nice returns over the past five weeks, with 31 receptions for 372 yards and two touchdowns in that stretch.