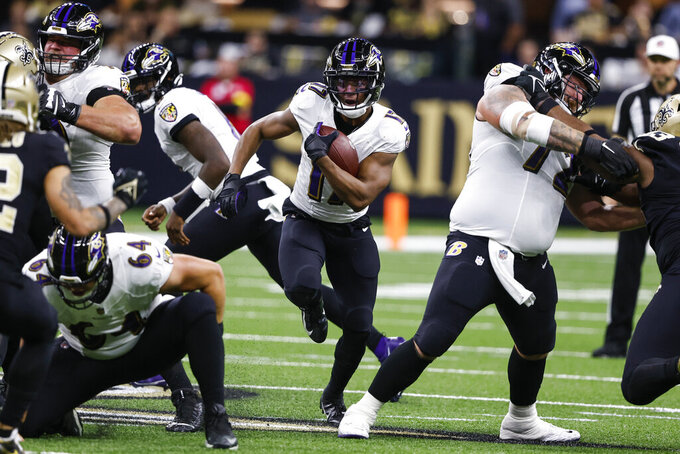 Baltimore Ravens running back Kenyan Drake, center, runs with the ball in the first half of an NFL football game against the New Orleans Saints in New Orleans, Monday, Nov. 7, 2022. (AP Photo/Butch Dill)

NEW ORLEANS (AP) — Lamar Jackson and the Baltimore Ravens didn't need their full complement of key contributors to stifle the Saints and silence the Superdome.

Kenyan Drake rushed for 93 yards and two touchdowns, Justin Houston had an interception to go with his third straight multiple-sack game, and the Ravens beat New Orleans 27-13 on Monday night.

Jackson passed for a touchdown and frustrated New Orleans (3-6) with his mobility, rushing for 82 yards and exhibiting an array of jump cuts and spin moves while helping Baltimore (6-3) win its third straight and remain atop the AFC North, one game ahead of Cincinnati.

“The human will can only take so much. It was just pounding down in and down out,” Drake said. “That’s just what this team is all about — just continuing to wear teams down and grind them out with four quarters of football.

“If you can stand up to that, more power to you, but more times than not we’re going to win that battle,” Drake said.

The Saints entered the game with a chance to pull into a three-way tie atop the anemic NFC South with Atlanta and Tampa Bay. Instead, they were outclassed by a Baltimore team missing several offensive starters, including tight end Mark Andrews and running back Gus Edwards.

The Ravens converted nine of 15 third downs and had 319 total yards. The Saints were 3 of 11 on third down and finished with a season lows of 243 yards and 13 first downs. Baltimore possessed the ball for 37:47.

“They beat us in a lot of different areas,” Saints coach Dennis Allen said. “Time of possession is a factor of all phases of the game. And so we did not do a good job on third down in either aspect, offensively or defensively.”

Andy Dalton passed for 210 yards and New Orleans' lone touchdown to tight end Juwan Johnson, which came in when the game was virtually out of reach in the fourth quarter. Alvin Kamara was limited to 62 yards from scrimmage, his lowest output in five games.

“We got just got beat," Dalton said, adding that Baltimore “deserved to win this one. They got after us."

Dalton was sacked four times and his interception came on a pass tipped by Brent Urban. The play set up Drake's second TD.

Consequently, the stamina of New Orleans' defense was tested as the unit contended with the elusive Jackson for 19:31 of the first half. Baltimore's star QB didn't let that time go to waste.

“Traditionally you cover for 3 to 4 seconds and the play is over," Saints safety Tyrann Matheiu said. "But a guy like that is a 7-, 8-, 9-second cover.”

While rolling right, Jackson found tight end Isaiah Likely running a flag pattern for a 24-yard score to make it 7-0 in the first quarter.

In the second quarter, Jackson orchestrated a 12-play, 81-yard drive during which he ran for gains of 7, 16 and 12 yards. Drake capped it off by running into the end zone virtually untouched from a yard out for a 14-0 lead.

Ravens coach John Harbaugh recalled shaking his head on the sideline in awe of Jackson's displays of explosiveness and agility.

“I do not take it for granted,” Harbaugh said. “I think I said, ‘Wow,’ a couple of times. Lamar plays on a different level. You can’t just look at the passing stats.”

The Saints did not get on the board until Wil Lutz's field goal as time expired in the half — a couple plays after Dalton overthrew open receiver Marquez Callaway in the end zone.

The Saints held a halftime ceremony to honor the late linebacker Sam Mills, who was inducted posthumously into the Pro Football Hall of Fame this past summer.

Appearing on the field in gold jackets were Saints Hall of Famers Rickey Jackson, Willie Roaf and Morten Andersen, along with linebacker Pat Swilling, who was part of the famed “Dome Patrol” linebacker corps that also included Jackson, Mills, and Vaughan Johnson.

Their coach, Jim Mora, also appeared while a video montage of Mills' Saints highlights were played on the Superdome video boards.

Ravens: Right tackle Morgan Moses received attention on the field during the third quarter. ... Veteran receiver DeSean Jackson injured a hamstring in his first game with Baltimore. He caught one pass for 16 yards.