Eagles gearing up to face the reigning Super Bowl champs 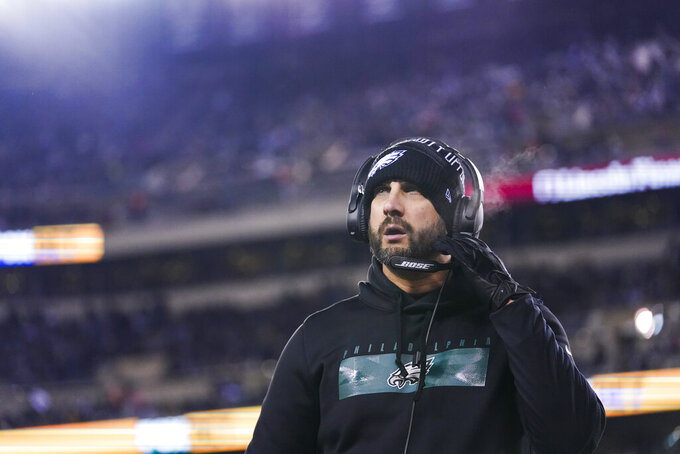 Philadelphia Eagles head coach Nick Sirianni walks the sideline during the first half of an NFL football game against the Dallas Cowboys, Saturday, Jan. 8, 2022, in Philadelphia. (AP Photo/Julio Cortez)

Nick Sirianni is approaching his first playoff game with the Philadelphia Eagles against the defending Super Bowl champions the same way he did 17 regular-season games.

The only rookie coach to lead his team to the playoffs this season isn’t changing anything now that the Eagles (9-8) are here and getting ready to face the Tampa Bay Buccaneers (13-4) on Sunday.

“We’re going to have our same process that we’ve had throughout the entire year of trying to get a little bit better each day to give ourselves a chance to go 1-0,” Sirianni said Monday. “And we know how good of a team that Tampa is. That’s going to be typical through the playoffs. ... We’re going to stay the same way. I know it sounds cliché, but it’s just if you start doing anything different now in the playoffs than you’ve done the entire 18 weeks prior, you’ve done the 17 or 18 weeks wrong. That’s my philosophy, that’s how I was raised in this business, and I think that’s what good coaching is.

“If you’re going to do something different this week, then you haven’t prepared the right way for 18 weeks this season. So, we know we got a challenge. We know we’re playing a very good team, the defending Super Bowl champs, and we’re going to prepare like crazy. We got the right guys in this building that I know are going to give everything we got and do everything we can do to get better each day to put ourselves in position to win this week.”

The Eagles secured a wild-card spot last week so they rested Jalen Hurts and most of their starters Saturday night in a loss to Dallas. The coaching staff focused much of their preparation Sunday on Tampa because it was the most likely matchup for Philadelphia.

Meanwhile, Tom Brady and the banged-up Bucs played until late in the fourth quarter in a rout over Carolina on Sunday that earned the NFC South champions the No. 2 seed.

“A lot of our focus was on Tampa and it’s nice when it comes out that way where you’ve put in the work there and you don’t have to start again,” Sirianni said. “So, that was a lot of our emphasis (Sunday). It was fun to just be able to have the games on in the background and watch some things that we were tracking as we got ready to play our game next week.”

The run game. The Eagles won seven of nine to clinch a playoff berth by relying on their run game led by Hurts and running backs Miles Sanders, Jordan Howard, Boston Scott and Kenny Gainwell. Injuries have forced them to use a rotation of backs but thanks to a dominant offensive line, they’ve had success. The Eagles finished No. 1 in the NFL, averaging 159.7 yards rushing per game.

Starting fast. In the five games before the last one, the Eagles were outscored 35-7 in the first quarter. They will need to start faster against the Bucs.

Jalen Reagor. The 2020 first-round pick only had two catches against the Cowboys. He finished with 33 catches for 299 yards and two TDs in 17 games.

Sanders is expected to return from a broken hand after missing three games. Howard also is expected back after sitting out the last game.

11 — The Eagles ended the regular season with 100-plus yards rushing in 11 consecutive games, the team’s longest streak since a 19-game stretch in 2010-11. But the Buccaneers have the league’s third-best run defense, allowing just 92.5 yards rushing per game.

The Eagles seek to upset the Buccaneers and prevent them having a chance to become the first team to repeat since Brady led the Patriots to consecutive Super Bowl titles following the 2003-04 seasons.