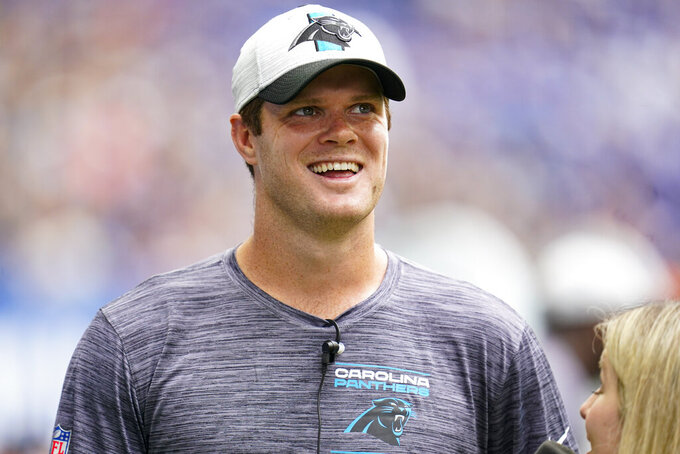 Carolina Panthers quarterback Sam Darnold laughs during an interview on the sideline during the second half of an NFL exhibition football game against the Indianapolis Colts in Indianapolis, Sunday, Aug. 15, 2021. (AP Photo/Michael Conroy)

INDIANAPOLIS (AP) — Jacob Eason was efficient in place of the injured Carson Wentz, and rookie Sam Ehlinger delivered in the final quarter for the Indianapolis Colts.

Ehlinger, a sixth-round pick out of Texas, began his NFL debut with an interception. But he regrouped and drove the Colts to a tying touchdown capped by his 2-point conversion run. Ehlinger then scrambled 11 and 9 yards to set up Eddy Pineiro's 30-yard field goal in the final seconds, and the Colts beat the Carolina Panthers 21-18 in a preseason game Sunday.

Eason played the first half and finished 15 of 21 for 183 yards with a lost fumble as the Colts got a look at their backup quarterback options while Wentz recovers from foot surgery. Ehlinger handled the second half, completing 10 of 15 passes for 155 yards and the one pick.

“That's the kind of thing you want to see from your quarterbacks, mental toughness, being able to handle the blitz and come back and play winning football,” Colts coach Frank Reich said. “I think both of them are probably going to grade out as playing winning football at the end of the day.”

Panthers starting quarterback Sam Darnold didn't play, either, and the game was dominated by defensive reserves. Former Colts practice squad player P.J. Walker started for Carolina, going 10 of 21 for 161 yards and a touchdown.

Ehlinger entered in the second half with the Colts trailing 15-10. Kenny Robinson provided a humbling introduction by intercepting Ehlinger's fourth pass.

But after the Panthers widened their lead to 18-10, Ehlinger connected with Tarik Black for 47 yards, then hit Tyler Vaughns for a 25-yard gain to set up Benny LeMay's 1-yard TD run. Ehlinger scrambled up the middle for the tying conversion.

On the next drive, Ehlinger scrambled to keep the Colts moving. An 11-yard run on third down got the Colts to the Panthers 17 at the 2-minute warning. Pineiro's deciding kick with 7 seconds remaining capped a 16-play drive.

“Whatever it takes to win,” Ehlinger said. “Individually, it started off a little shaky.”

The Panthers dominated much of the first half. Rookie Chuba Hubbard was seemingly swallowed up by the pile on a third-and-1 inside rush, but inexplicably emerged on the other side and sped ahead for a 59-yard gain. Two plays later, Walker hit rookie Tommy Tremble on a 7-yard TD pass to give the Panthers a 15-3 lead.

Carolina's Joey Slye converted field goals from 29, 28 and 41 yards while the Colts' Rodrigo Blankenship made a 34-yarder in the first half. Carolina's second kick was set up by Marquis Haynes recovering his own strip-sack at the Colts' 14 near the end of the first quarter. Haynes had three quarterback hits in the opening quarter.

When the Colts drove into Panthers territory on the next possession, Frankie Luvu sacked Eason for a 13-yard loss on a fourth-and-1 rollout. That set up Slye for the 41-yard kick. Slye tried one from 63 yards on the final play of the half but missed wide left.

Hubbard, a fourth-round pick out of Oklahoma State, had gained 6 yards on five carries before his breakaway rush. Walker completed a 26-yard pass to rookie Shi Smith on the drive before scrambling to throw for the touchdown.

The Colts responded 74 seconds later as Jordan Wilkins scored on a 3-yard run with 42 seconds left in the half.

“I was happy with the result of that drive,” Eason said of the hurry-up offense, “and to get that experience under my belt.”

The Panthers were flagged for six false-start penalties, including on three consecutive plays in the fourth quarter. On the sixth infraction, referee John Hussey said, “False start, everybody but the center.”

The Colts didn't play any offensive starters and used just two defensive starters. Panthers coach Matt Rhule kept all of his No. 1s on the bench, including Darnold and running back Christian McCaffrey. The Panthers started six of this year's draft picks.