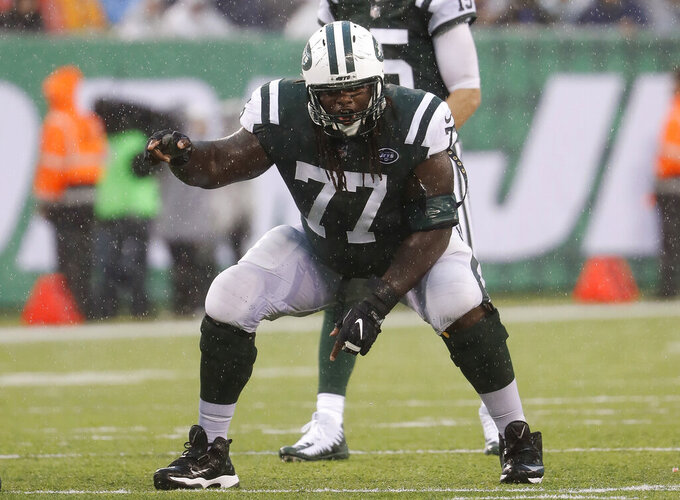 FILE - In this Oct. 29, 2017, file photo, New York Jets offensive guard James Carpenter gets set at the line of scrimmage during an NFL football game against the Atlanta Falcons at MetLife Stadium in E. Rutherford, N.J. After Matt Ryan agreed to restructure his contract to clear cap space, the Atlanta Falcons spent that money on two new starting guards, Jamon Brown and James Carpenter, to help protect the quarterback. (Winslow Townson/AP Images for Panini via AP, File)

Ryan agreed to tweak his contract on Tuesday with $8.75 million of his 2019 base salary to be paid as a signing bonus. The Falcons cleared $7 million in cap space with the move.

The Falcons added additional cap space of about $6.45 million with their release of right tackle Ryan Schraeder on Wednesday. Schraeder's agent Joel Turner, confirmed the release to The Associated Press.

Offensive guard was the Falcons' top priority. The newcomers will add bulk to the middle of the line. Carpenter (6-5, 321) and Brown (6-4, 340) will compete for starting jobs at left guard and right guard, respectively.

Brown, whose 26th birthday is Friday, was released by the Rams last season before signing with the Giants, where he was an immediate starter . Carpenter, whose 30th birthday is March 22, was limited by a shoulder injury to 10 games with the Jets in 2018.

It would not be a surprise if more help for the line comes in the NFL draft, though the free-agent signings give Atlanta more flexibility to address another need with their first-round pick, No. 14 overall. Other needs include defensive line, cornerback and running back.

Koetter said last month the staff was "going through that playbook line by line and play by play" and "ironing out what's going to be the Falcons' offense moving forward."

The first emphasis was the offensive line, where center Alex Mack and left tackle Jake Matthews may be the only 2019 starters who started to open last season.

"You can have the greatest skill players in the world, but your O-line and your D-line set the tempo for the team," Koetter said.

Atlanta ranked 27th in the league in rushing last season. Improvements in pass-blocking also are needed.

Ryan wasn't sacked as many as 30 times in any of his first five seasons. He's been sacked 30 or more times in five of the last six years, including 42 times in 2018.

Despite the lack of protection, Ryan has been very durable. He has started every game in nine straight seasons since missing two games in 2009.