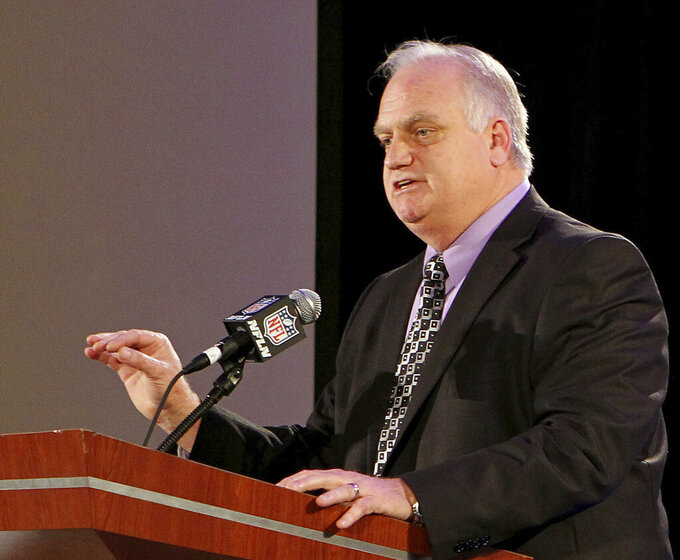 FILE - In this Jan. 31, 2013, file photo, former NFL quarterback Eric Hipple speaks during an NFL Player Health and Safety press conference in New Orleans. Atlanta Falcons guard Ben Garland and former Detroit Lions quarterback Eric Hipple are the finalists for the NFL's Salute To Service Award. The recipient of the award, presented by USAA, will be revealed on Feb. 2 during the NFL Honors show when The Associated Press announces its annual league awards, including MVP. (AP Photo/Doug Benc)

The recipient of the award, presented by USAA, will be revealed on Feb. 2 during the NFL Honors show when The Associated Press announces its annual league awards, including MVP.

Garland and Hipple were selected for their efforts to support members of the military community.

Garland attended the Air Force Academy and just completed his fifth pro season. He recently was selected to become a major in the Colorado Air National Guard.

Garland is involved with helping veterans adjust to life after service and helping to raise awareness for PTSD. Last year, he participated in the Armed Forces Mission's Georgia LOSS Walk, when he walked alongside veterans, service members and families for a program called "Turning the Tide on Veteran Suicide."

Participating in the military taught Garland lessons that have helped him as an athlete and vice versa.

"Serving in the Air National Guard has been paramount to my development as a football player," he said. "It has helped my leadership skills, mental toughness, how to work under pressure, and establish an Air Force core values mindset of integrity first, service before self, and excellence in all we do. I also believe my NFL career has made me a better officer. Over my career, I have had the opportunity to play for some of the best coaches in the world and in doing so was able to study their leadership methods."

Garland works year-round with a number of military nonprofits: Merging Vets and Players, Emory Healthcare Veterans Program, Shepherd Center SHARE Initiative and TAPS. He works with Pigskin Patriots to help raise funds and donate time for camps for military children and with Children of the Fallen Patriots Foundation on granting college scholarship funds.

Hipple retired following the 1989 season after 10 seasons in the NFL. Since his 15-year-old son Jeff's suicide, Hipple has worked to build awareness and break down the stigma surrounding depressive illnesses.

In conjunction with NAVY U.S. Fleet Forces, Hipple has conducted workshops on suicide and destructive behavior prevention during the last decade, focusing on mental fitness. His book "Real Men Do Cry" received a publisher Presidential Award.

After retiring from the University of Michigan's Comprehensive Depression Center, where he spent 11 years in outreach, Hipple serves as outreach specialist for Eisenhower Center's "After The Impact" program, a neuro-behavioral residential treatment facility serving military veterans and former NFL players.

"There are many similarities when working with military and NFL players in regards to their mental health," he said. "Pressure of training, stress, performance, winning and the mission comes first and at all costs, risk of injury. Most of all, it is retaining their identity and locker room camaraderie after a career is over. Some of the pitfalls are depression, PTSD and substance abuse."

Hipple does suicide prevention workshops for U.S. Fleet Forces on Navy bases and Naval Air stations on the East Coast, in Europe and the Middle East. He has been involved with the planning of the Real Warrior Campaign of Army suicide prevention and organized public service announcements with players supporting service members. In 2008, Hipple helped organize with the players' union for NFL Legends to speak at Army bases throughout Texas, New York, Georgia and Mississippi during the NFL playoffs, and for the Real Warrior Campaign's presentations place at Okinawa Marine base in Japan.