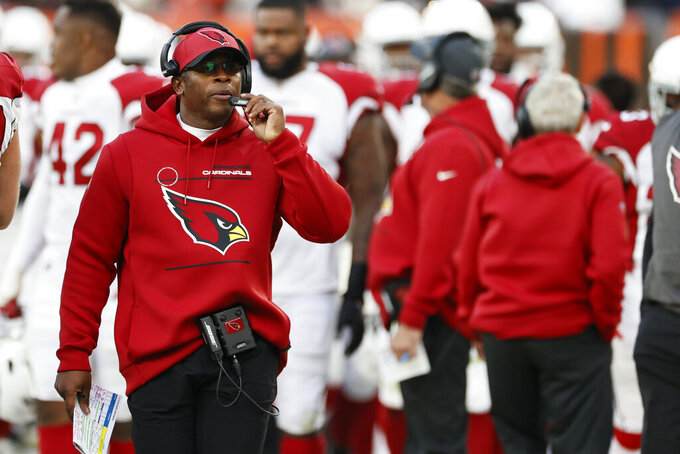 Arizona Cardinals defensive coordinator and acting head coach Vance Joseph looks on during the second half of an NFL football game against the Cleveland Browns, Sunday, Oct. 17, 2021, in Cleveland. (AP Photo/Ron Schwane)

The sickness the Cardinals had to conquer was COVID-19.

The Raiders' scourge was bigotry.

Defensive coordinator Vance Joseph steered the unbeaten Cardinals to a 37-14 rout of the Cleveland Browns just 48 hours after head coach Kliff Kingsbury, the teams' offensive play caller, was sidelined with a breakthrough case of COVID-19, as was quarterbacks coach Cam Turner.

Joseph credited the entire staff and especially assistant receivers coach Spencer Whipple, who handled the communication to Kyler Murray, who threw for four touchdowns as the Cardinals (6-0) remained the NFL’s only unbeaten team and continued their best start in 47 years.

“The operation was very smooth, being on the road for us to not have coach Kliff,” Murray said. “Whipp kept calling it aggressively and we got it going.”

The Cardinals were unfazed.

"I think we were even more excited because the odds seemed stacked against us,” Murray said.

Following the game, owner Michael Bidwell reached Kingsbury, who was able to talk to several players and coaches via FaceTime.

“I couldn’t really hear him because it was pretty loud,” Murray said of the raucous locker room that might only have been rivaled by the Raiders'.

They appeared ripe for an unraveling after the stunning downfall of their iconic coach, Jon Gruden, who resigned in disgrace last week over sexist, racist and anti-gay sentiments he had expressed in old emails.

Like Whipple, Raiders offensive coordinator Greg Olson ratcheted up the aggression in his first game as a play-caller in seven seasons. He dialed up a steady diet of deep throws for Derek Carr in a 34-24 statement win at Denver that thrust the Raiders into a first-place tie with the Chargers atop the AFC West at 4-2.

“The advantage to us, this is the first game ‘Oly’ called in a while," said special teams lifer Rich Bisaccia after his triumphant debut as the Raiders' interim head coach.

The Broncos said all week they were expecting the same Raiders team to show up, and they were right. But Las Vegas' offense had a different twist as Olson used more play-action, allowing Carr to hit some more big plays that had been lacking the previous two games, when the offense stalled under Gruden's run-first philosophy.

Carr’s seven explosive pass plays accounted for a whopping 257 yards and included touchdown throws of 48 and 31 yards against a Broncos secondary that is the league's priciest.

It added up to the most efficient day on offense for the Raiders in nearly a quarter-century with their 8.19 yards per play, doubling the rate of the final two games under Gruden.

“For us, we are always looking to push the ball down the field,” Carr said. “We always believe we can do that.”

The Raiders became the first team since at least 1991 to have seven pass plays gain at least 25 yards, according to Sportradar.

Coincidentally, the losers of both of those games have a short week before playing each other in Cleveland on Thursday night in a matchup of battered 3-3 teams trying to maintain relevancy in 2021.

The victories by the resilient Raiders and Cardinals highlighted a wild Week 6 that began with Jaguars coach Urban Meyer saying he wouldn't skip any more of his team's flights, like he did last month in an ill-conceived decision that ended up embarrassing the franchise.

Meyer won his first NFL game and his team snapped a 20-game losing streak with a last-second win over the Miami Dolphins in London early Sunday.

The week concluded with more high drama when Buffalo QB Josh Allen slipped on a QB sneak on fourth-and-inches from the Tennessee 3 Monday night. Bills coach Sean McDermott bypassed a game-tying chip shot field goal with 22 seconds left and put the ball in the hands of his play-maker.

Allen lost his footing and the AFC East-leading Bills (4-2) lost 34-31, their first defeat in a month.