First-place Ravens must stay sharp down the stretch 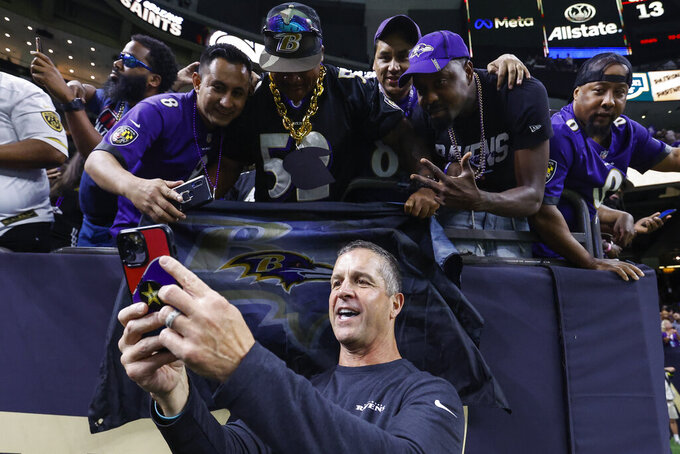 OWINGS MILLS, Md. (AP) — When the Baltimore Ravens began the season, they had every reason to believe Rashod Bateman would be their top wide receiver, Mark Andrews a standout tight end — and eventually, J.K. Dobbins and Gus Edwards might be their best options at running back.

Those four players weren't able to participate against New Orleans on Monday night. Baltimore won that game anyway and reached the halfway point of the season in first place.

For a second straight season, the Ravens are dealing with some significant injuries, and like last year, they largely overcame them through the first nine weeks.

Now the question becomes: Can Baltimore keep this up and remain in contention in the AFC? In 2021, the Ravens also lost quarterback Lamar Jackson down the stretch, and they dropped their final six games. There are reasons to expect a more favorable outcome this time.

The Ravens started 8-3 in 2021, but even then, they had eked out quite a few close games. This season, Baltimore has had a double-digit lead in every game so far, and although a few of those slipped away, the Ravens (6-3) have corrected their fourth-quarter problems well enough to build a three-game winning streak heading into this week's open date.

“We feel pretty good, but the season’s not over," Jackson said. "It’s just one week off, that’s all. Just a break from work, still have to stay locked in because there’s more season ahead of us.”

Baltimore is a half game behind Buffalo and Kansas City for the AFC's best record, and the schedule the rest of the way looks favorable.

Jackson and the offense have continued to put up points despite all the injuries to the team's rushing and receiving options. The star quarterback is 10th in the AFC in yards passing and sixth in rushing. He's also thrown for 16 touchdowns, already matching his total from last season.

The injury to Bateman removed a big-play threat from Baltimore's offense, and it shows. The Ravens can move the ball methodically, and their running game occasionally breaks off a big gain, but Baltimore has only three passes all season of at least 35 yards, and they all came in the first three weeks.

The pass rush has been a huge factor lately with 19 sacks in the past five games. Linebacker Justin Houston has 6 1/2 sacks in the past three games, and at age 33, he is now tied for second in the NFL with 8 1/2.

“I feel like Justin is having a great year at this stage in his career. To me, it’s a credit to him in so many ways, but it’s a credit to him in the sense that he really worked hard,” coach John Harbaugh said. “When you get a little bit older, you have to work that much harder just to stay the same. Just to be able to play, to stay healthy and to be able to perform. He did that. He really put the work in.”

Receivers Tylan Wallace and James Proche have combined for only nine catches, and with the injuries on offense, the opportunity to step up has certainly been there. Even with Devin Duvernay's emergence, the Ravens still don't have a receiving group that really scares opponents. Bateman's foot injury really hurt after the offseason trade that sent receiver Marquise Brown to Arizona.

Bateman is on injured reserve, as is Dobbins (knee). Harbaugh said he expects Edwards (hamstring) to be back for the next game and Dobbins to return in a few weeks. Andrews missed the New Orleans game following knee and shoulder problems.

20 — The number of games under .500, collectively, for the last eight opponents on Baltimore's schedule. That counts Pittsburgh (2-6) twice because the Ravens have two games against the Steelers. Cincinnati (5-4) is the only team on the remaining schedule that does not currently have a losing record.

Baltimore has this weekend off before hosting the Carolina Panthers on Nov. 20. When that happens, the Ravens will have played only one game in their previous 23 days.