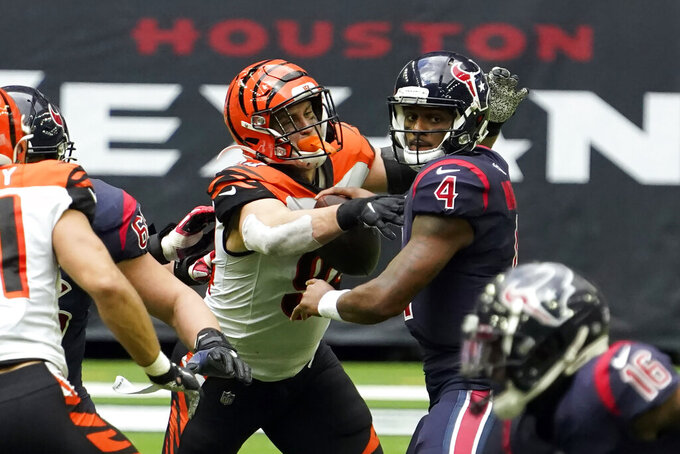 Houston Texans quarterback Deshaun Watson (4) fumbles the football as he is hit by Cincinnati Bengals' Sam Hubbard (94) during the second half of an NFL football game Sunday, Dec. 27, 2020, in Houston. The Bengals recovered the fumble. (AP Photo/Eric Christian Smith)

HOUSTON (AP) — Frustration boiled over for star J.J. Watt after the Houston Texans dropped their fourth straight game on Sunday.

Samaje Perine ran for two touchdowns, including a 3-yard score late, to give the Cincinnati Bengals their first road win in more than two years with a 37-31 victory over the Texans.

The Texans were driving after Perine’s second score when Deshaun Watson was sacked by Sam Hubbard, who forced a fumble that Margus Hunt recovered. The Bengals added a field goal after that to seal the victory.

After the game Watt, a three-time NFL Defensive Player of the Year, was asked if this was the most difficult season of his 10-year career.

That question elicited only a terse “yes.” But a follow-up about how the Texans (4-11) can regroup next week to finish the season on a positive note opened the floodgates. Watt responded with an impassioned and expletive-laced rant that lasted almost two minutes.

He seemed to grow angrier as he spoke, raising his voice and slamming one hand into the other to punctuate his points as his cheeks took on a rosy color.

Watt was upset that the Texans gave up 540 yards and their NFL-worst run defense continued to struggle by allowing 169 yards, including the go-ahead TD by Perine.

He also seemed to call out unnamed teammates for a lack of professionalism and effort in this difficult season that led to coach Bill O’Brien’s firing after the Texans opened the season 0-4.

Watt, who had three tackles and two quarterback hits on Sunday, wasn’t feeling sorry for himself after the game, but lamented the fact that this team hasn’t given Texans fans much to cheer about this season. He said people still send him messages on social media every week to encourage him and say they’re still rooting for the team.

It’s the third time in the past four games that the Texans have had a chance to win or tie a game late but lost a fumble instead.

“Fumbles that occur at any point in the game, you don’t like them,” interim coach Romeo Crennel said. “But when they occur in situations where you have a chance to win, I think that’s a double whammy in that case.”

The late fumble ruined another great performance by Watson, who threw for 324 yards and three touchdowns for his ninth 300-yard game this season. He has thrown 30 touchdown passes this season to set a single-season franchise record and his 4,458 yards passing this season are a career high and the second most in team history.

Cincinnati coach Zac Taylor talked about the difficulties of dealing with Watson and raved about the fourth-year player.

“Deshaun is one of the best football players I’ve seen in my lifetime,” Taylor said.

Watson was shaken up on the play that resulted in the fumble, but returned in the last seconds of the game and said he was OK and would play next week against the Titans.